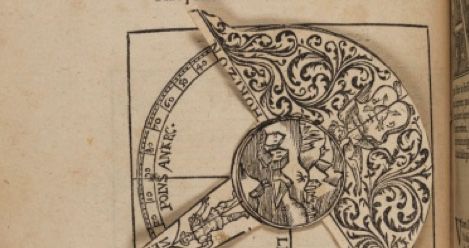 However, pop-up books weren’t always intended for children. Renaissance books were filled with pop-ups and paper sculptures that were definitely intended for adults. Suzanne Karr Schmidt, Curator of Rare Books and Manuscripts at the Newberry Library, has recently published her research on Renaissance pop-up books in Interactive and Sculptural Printmaking in the Renaissance. I had the opportunity to talk with her about her work as well as see some wondrous examples from the Newberry collection.

Karr Schmidt identified several types of pop-ups that were found in these Renaissance books. Some were traditional flaps that hid images or text, while others were dials that spun. Some could be cut out made into sculptural items, like sundials, astrolabs and even a calendar to help people keep track of Easter each year.

I asked Suzanne Karr Schmidt how she got interested in the topic in the first place. She explained: “I took a class about print technology and I ended up reading a book on popular print, Robert Scribner’s For the Sake of Simple Folk. It had really dingy black and white image of Pope as the devil…in a rather large broadside in Munich state library. It seemed absolutely fascinating that you could have this sort of dual image where you lift part of it and get an entirely different result than is expected.” She explained that she kept writing papers, even putting together a show at Yale’s Beinecke Rare Book and Manuscript Library. “I called them movable prints at that point and my advisor joked that eventually people will have to call all other prints ‘immovable prints’…I basically had no choice; I had to keep working on the material at that point.”

These pop-ups were really intended to be used by adults, not children as we think of pop-ups today. We talked briefly about when that shift happened.  Suzanne Karr Schmidt explains that in 18th century, the learned classes were less interested in these pop-ups books. Starting then, pop-ups became “more for kids, more about theatrical souvenirs, like pantomime type stuff. I think in the 19th century and on, it’s getting really mostly for kids.”

We talked about how the pop-ups would be used in various context and who might have seen them. She explained “The anatomy ones were probably stuck up for entertainment purposes. Even the female anatomy ones could have been stuck up as a slightly dirty picture. depending on where you were…in a tavern or something like that. Most of what we have to go on are paintings where you have images above the fireplace. Usually they’re fairly disreputable places that have have a sort of secondary commentary going on in the prints. So you never know if it was really something in an interior, but I think the practice is correct that there would have been decoration with these large scale items.

“So if you couldn’t afford it, you might have still been able to see it at fairs where people would try to sell these things, the single sheets especially. But that doesn’t mean that people who had greater means weren’t buying the somewhat lower end items too because they were interesting technically and for the message.” She explained that the big books probably were not available to the peasants; those were more for “the affluent merchant class and above.”

Just taking this here volvelle for a sssssspin. 🐍 Before we outsourced our memories to the Internet, we used mnemonic devices like this: spinning the dial created letter combinations that could be used to help remember and recall certain concepts. [Artes orandi, epistolandi, memorandi, by Jacobus Publicius. 1482. Inc. 4388] #memory #volvelle #mnemonic #incunable

I asked about the possible educational use, especially for the anatomy ones. She said that some of the anatomy ones were used a bit but “the really big early ones are not all that accurate. You’re coming up against Vesalius there and he did have some components that you could cut out and paste a pin. You could learn visually about where things could go and those certainly were used by students. I think there’s also a history of 1613 engraved version with three different plates. One’s female, one’s male and one is sort of both, by Johann Remmelin. I believe those were actually put on the walls at a couple of universities, possibly in the actual dissection chambers, but nevertheless there’s a history of them being in the libraries as well. They certainly did end up being taken—if not seriously, at least being used at some level for student body at the very least to say: ‘look at this.’”

Karr Schmidt showed me several amazing “movable prints” held by the Newberry Library. One of the texts was a 17th century Dutch book that was actually composed of two books bound together. Karr explains that the books were used as games that could be used in mixed company. She explains that you would ask a question like “Will I be happy?” or “Should I take this sea voyage?” and the text would guide you to tables of dice that would tell you to go to a month or an animal that would “answer” the question, kinda like a “choose your own adventure.” Karr explained that “Often in Germany, dice were obviously not always considered very positive…It’s really not socially acceptable. A lot of the German ones will have exactly this format and then we’ll have a dial at  the beginning. So it’s pretending that it’s really chance and it’s not the dice that are blame. In this text, there was a little soldier whose hand would point to various dice values.”

Wondering how many heirs you’ll have or when the next plague will strike? Ask the soldier of fortune and spin the dial! This early 17th-century Dutch “lottery book” (basically an elaborate magic 8 ball) would then send you through a series of prompts before providing you with your answer. #lottery #fortune #dutch #specialcollections

She also pointed out that the texts had “one of the most epic good and bad fortunes ever.” She explains that in the good fortune section, “you were showered with coins, but in the bad fortune section, you were showered by the turd bucket.” She explained that this kind of text was popular in the 15th–17th centuries with a few 18th versions as well. The appeal was multicultural with versions in Spanish, English, French, German, Italian, Dutch, and even Polish.

I asked if Bibles ever had pop-up components. Suzanne Karr Schmidt said, “They are some that have calendars,  like Easter calendars, You get an angel telling you when [Easter will be] the next year or so.  I mean there were some devotional-like books, but I think the Bible doesn’t usually come with moving parts.”

There’s so much more to learn about these books from Suzanne Karr Schmidt’s work. Also she convinced the publisher to let readers cut out their images to make their own pop ups in the books. So that’s definitely worth checking out!