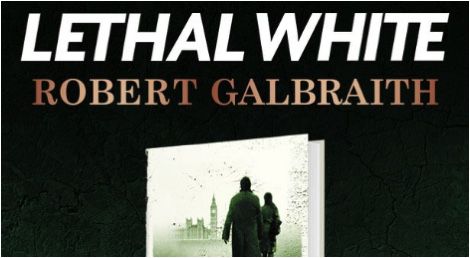 Robert Galbraith (aka J.K. Rowling) announced on Twitter that the fourth installment of the Cormoran Strike detective series, Lethal White, will be released on September 18, 2018 and is available for pre-order. “Galbraith” also revealed the book’s cover, which is a departure from previous installments of the series.

Lethal White, the fourth instalment in the Strike novels, will be out on 18 September and is available now to pre-order, and this is what it will look like#LethalWhite #Strike pic.twitter.com/ruDbbteaPF

Rowling has hinted on Twitter that Lethal White will pick up at the exact cliffhanger moment the third book, Career of Evil, ended.  Fans of the series have been anxiously awaiting the conclusion of Robin’s wedding since 2015, and of course will be there to ride along as Strike solves another sure-to-be-grisly mystery.

Lethal White will also be the first new Strike installment since the series adaptation started airing on the BBC in August 2017.