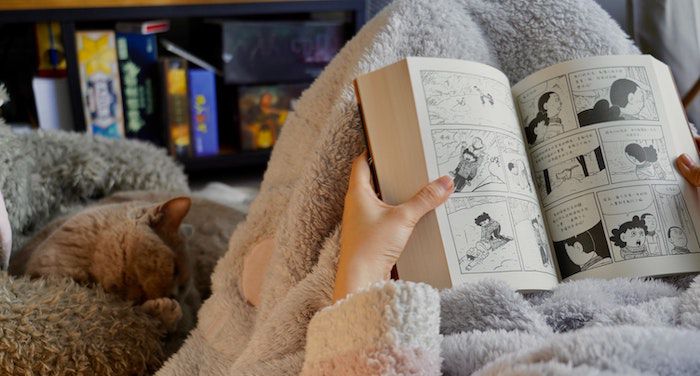 Through the entirety of my teenage years, I hated manga. Like, really adamantly hated it. I was one of those assholes who thought it was dumb and weird and haughtily made fun of it and the people who read it.

I can attribute a small part of this extreme attitude to the simple fact that I was a teen. A terrible, pretentious teen, not unlike many of my peers (I’m sorry, but it’s true). I have plenty of stories completely unrelated to manga that prove what a dipshit I was, so I have no doubt this was certainly a small factor. But in reality, my unreasonable disdain for manga was much more complicated, and only recently have I really been able to examine it and shift my perceptions.

It really all started with the fact that I was born Japanese American. Obviously, that is not a direct cause-and-effect situation (not to mention a horrible excuse), but I, very regrettably, fell victim to intense internalized racism at a young age — something I have spent my entire adulthood trying to correct. This manifested in me doing everything I could to distance myself from Japanese culture, from asking my mom to only pack me peanut butter sandwiches for lunch to insisting we speak English when in public, and, of course, talking shit about manga.

The thing is, if I really think about it, manga has always been a part of my life in some small way as a package deal with the rest of my Japanese heritage. I grew up watching the anime Chibi Maruko-Chan, adapted from the classic shōjo manga series of the same name. In elementary school, I read bilingual editions of the yonkoma manga Sazae-san. And even in high school, during the peak of my manga-slandering days, I was totally reading Nodame Cantabile, anticipating the releases of each new English volume. So, what the hell?

Despite all the ways in which Japanese culture was unmistakably a definitive part of my life, when I was a teenager, one of the best compliments you could give me was to tell me how un-Japanese I was. Every time I stepped out of my home and into the world, I put on a facade of Americanness, whatever I thought that was. This obviously isn’t a unique experience — it’s the universal struggle of every person of color and child of immigrants in the U.S. I’ve encountered every classic example of racism and microaggression you’ve heard of, and even more that you’ve never heard of.

The first things people would most often bring up upon finding out I was Japanese were manga and anime, which is why they became the primary targets of my derision. I took pride in betraying people’s assumptions and also attempted to defend myself from becoming a subject of fetishization by acting completely clueless and dismissive about my own culture. White dudes loved bragging that they were more Japanese than me just because they knew what Death Note was, and I let them have that win because what if these guys get off on cartoons of Japanese school girls? As irrational a fear as this might have been (well…maybe it isn’t that irrational), I wasn’t willing to take my chances just in case they were looking for me to fulfill some sort of fantasy for them.

Things started to change when I went to college and quickly gained a tight-knit Asian community that I’d never had before. Prompted by sudden interest mixed with pent-up regret that I hadn’t done so as a kid, I began to study Japanese in earnest, finally becoming literate (until then I could only speak the very basic Japanese I used with my family) and even completing a minor in it. To practice and hone my newfound reading skills, I turned back to manga. I finally read the Japanese pages of my bilingual Sazae-san editions, started getting the Japanese volumes of Nodame Cantabile, and even checked out this Death Note all those white dudes loved droning on about.

As it turns out, manga is pretty great. From ultra-popular titles like the action-packed Kimetsu no Yaiba and beloved (albeit over-the-top) romance Hana Yori Dango, to titles that I don’t even think have been translated, such as Doubutsu no Oishasan (a slice-of-life about veterinary students) and Ōya-san to Boku (a comedian’s autobiographical account of daily encounters with his very old landlady), there’s something out there for everyone. Now, whenever I visit my family in Japan, I’ll stop at any bookstore I find to peruse the manga section with the zeal of a kid at a theme park.

While I’ll certainly never be able to claim to be a manga expert, or even that well-read in manga even now, I am proud to say that my relationship to it, not to mention to my own Japanese American identity overall, has completely turned around. And unlike that rude teen I used to be, I will now welcome anyone who wants to talk about it with me!