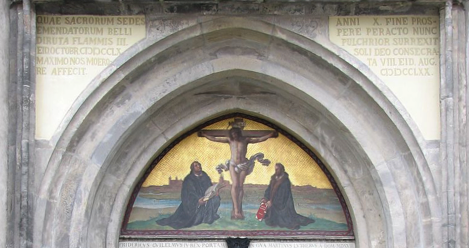 IT’S REFORMATION DAY! More accurately, the 500th anniversary of the Protestant Reformation, which began on October 31, 1517 when a young monk named Martin Luther nailed his grievances with the Catholic Church to a church door in Wittenberg, in what is now Germany. These are called the 95 Theses and they completely changed the world—and it’s been 500 years so let’s take a sec and evaluate what inspired the man who wrote these. 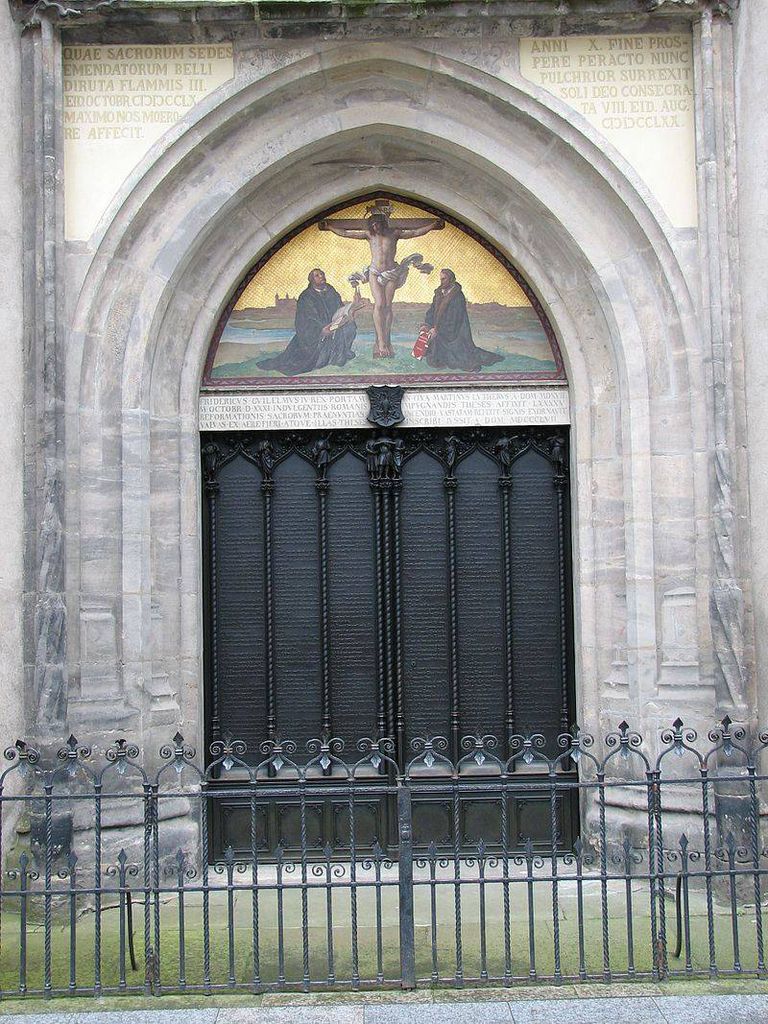 Commemorative Doors at the All Saints’ Church in Wittenberg

First of all, my friend who is a Lutheran minister would like it noted that Luther fell far short of sainthood. He used hyperbolic inflammatory language to convey his points (lots of men being called whores of Babylon and/or of Satan). His energy and emotions varied wildly, often affecting the theology produced; he would go through massive swings of depression where he couldn’t produce work and was certain of his doom to hell, and then manic phases where he was writing and working all the time. Towards the end of his life, as his health significantly deteriorated and threats on his life continued, he became even more erratic and extreme, producing his infamous work “On the Jews and Their Lies.” This is an extremely brief explanation on the context/overall life of a very very complicated figure.

Now! Onto the texts:

Of course! The Bible. Specifically, New Testament (i.e. post-Jesus) books like Romans, Ephesians, and Galatians, which are all books attributed to Jewish convert Paul (they were all originally letters, though).

One of Luther’s main issues with the Church was the selling of indulgences. In short, sin was understood to have “penalties,” which, if not paid in this life, would be paid through pain in the afterlife (before you entered Heaven). People could avoid this punishment (and could save dead family members from it) by buying a piece of paper which guaranteed your eternal salvation. This was 100% not sanctioned by the Bible, and Luther thought we should be basing Christianity off the actual text it comes from as opposed to just kind of inventing our own new rules.

Romans 1:17 in the New International Version translation says: “For in the gospel the righteousness of God is revealed—a righteousness that is by faith from first to last, just as it is written: ‘The righteous will live by faith.’”

Similarly, Ephesians 2:8 says “For it is by grace you have been saved, through faith—and this is not from yourselves, it is the gift of God.”

There is a human tendency to think we can achieve “goodness” through action, which makes sense, but the point of Scripture as Luther took it was that we then see that as “saving” ourselves, and we cannot. So it all comes down to faith and also indulgences are a bunch of malarkey.

Before he was a monk, Luther was going to be a lawyer (it all makes sense now!), so logical arguments appealed to him. William of Ockham was an English friar in the 1400s who articulated an idea that had been stated before and would be stated in a more popular way, but because Ockham apparently mentioned it all the time, it was named after him, in the Latinized “Occam’s razor.”

Occam’s razor states (essentially) that the simplest explanation is usually correct. Since Luther’s entire argument in the 95 theses is “Look, there’s nothing in Scripture or logic that supports the sale of indulgences or the teaching of purgatory, so let’s…maybe not do that,” and we know he was influenced by Ockham’s writings, it seems to be a direct application of the logic of Occam’s razor.

Augustine was a bishop in north Africa around 400 CE who was influenced by neoplatonism (which has been described as “”the intellectualist reply to the…yearning for personal salvation”) and wrote The City of God and Confessions. As a member of the Augustinian order, Luther was influenced by Augustine of Hippo’s understanding of human nature and divine grace, specifically that human nature as a whole has fallen to the point that it cannot be redeemed without the intervention of God’s mercy.

You can read the 95 Theses here, and if you’re interested in learning more about Martin Luther, a new biography of him has just been released, entitled Martin Luther: The Man Who Rediscovered God and Changed the World.