Like many people, I first discovered Ray Bradbury by reading Fahrenheit 451 in high school. Unlike many people, at least the people that I went to school with at the time, I fell in love with the writing. I looked for anything else I could find by Bradbury. I devoured The Martian Chronicles, especially the chapter called “August 2026: There Will Come Soft Rains.”

I could not help but notice the footnotes that ran at the bottom of several pages, telling the reader where that chapter had appeared before becoming a part of the “novel” that is The Martian Chronicles. The idea that each story could–and had, in several cases–stand alone fascinated me, and I started reading up on those magazines. I became enamored with the early days of science fiction, especially after watching an episode of Deep Space Nine called “Far Beyond the Stars,” when Sisko has visions of himself as a 1950s science fiction writer. I felt as though I had missed out on something special when I realized that those types of magazines had all but disappeared. Their modern day equivalents are just not the same. 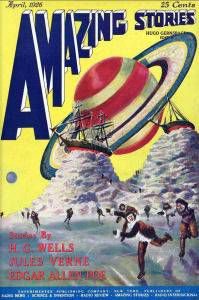 Over the weekend, I saw a tweet from SF Signal about the first issues of Amazing Stories being available online. This is just one of the magazines that Bradbury wrote for in his early days, so I took a look, hoping to find something by him. What I had not realized was that Amazing Stories had been around for a long time before Brabury’s name ever graced its pages. And it was just one of many such “pulp” magazines that were popular at the beginning of the 20th century.

The Pulp Magazines Project is an archive of fifty years worth of pulpwood magazines, from 1896-1946. They include covers and, when copyright permits, full issues available for download in PDF format. The first issue of Amazing Stories, from April 1926, includes stories by H.G. Wells, Jules Verne, and Edgar Allen Poe.  While not exactly contemporary to the publication of the magazine (in the case of Verne and Poe), these stories are the sort that inspired the creation of Amazing Stories, a magazine devoted to “Sciencefiction,” as the term appears in the first issue. The editor, Hugo Gersnback, describes his mission:

By “sciencefiction” I mean the Jules Verne, H.G. Wells, and Edgar Allan Poe type of story – a charming romance intermingled with scientific fact and prophetic vision….Not only do these amazing tales make tremendously interesting reading – they are always instructive.  They supply knowledge that we might not otherwise obtain – and they supply it in very palatable form.

Palatable, indeed. This is a pretty amazing find, and I cannot wait to do more exploring in the archive. I did not find those early Bradbury gems that I had hoped, but I now have several copies of different pulp magazines on my e-reader.  I look forward to rediscovering authors who have fallen off the radar.