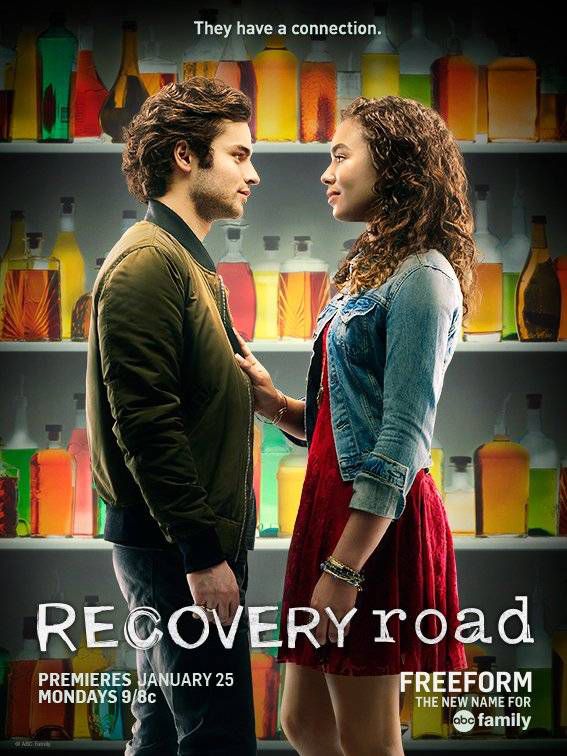 There has been a lot of chatter about the Freeform (formerly ABC Family) adaptation of Cassandra Clare’s Shadowhunters series. A good deal of that is because the first book in the series had been adapted onto the big screen in 2013 and now, fans anticipate a better take on the story as told through the serialized television format.

But the adaptation I’ve been counting down for this year hasn’t been Clare’s. It’s been for Blake Nelson’s Recovery Road. The series launches on Freeform January 25, but eager viewers like myself can check out the first three episodes via the Freeform website or app. You can also access it via Roku if you’re a cable cutter.

Nelson’s book, published in 2011, follows the story of Maddie, a teenage alcoholic and drug addict who has finally been admitted to treatment. The book showcases the ups and downs of her recovery, both while she’s at the facility and when she leaves. Likewise, we see and experience the lives of those who impacted Maddie while she recovered; this includes a best friend named Trish, as well as a budding romantic interest named Stewart. It’s a powerful, authentic exploration of mental illness, of addiction, and the challenges of maintaining one’s ability to recover when thrust back into a world that isn’t intent on their getting better.

But, as is the case in all of Nelson’s work, the book is at times supremely funny. Maddie’s voice is sharp, it’s at times snarky, and it’s at all times truly teenage. She’s not wise beyond her years nor is she written in a way to render her dumb. She’s made mistakes and continues to make mistakes, sometimes learning from them and other times not. Recovery Road isn’t about platitudes or about imparting a certain type of character. It’s about the realistic challenges of being a teenager with a serious set of illnesses that cannot be cured by anyone but the person struggling.

This book is perfect for the television format, and Freeform does tremendous service in keeping Maddie’s voice true to who she is. But the thing that caught me immediately wasn’t her voice. It was how she, as well as roommate Trish, were cast. 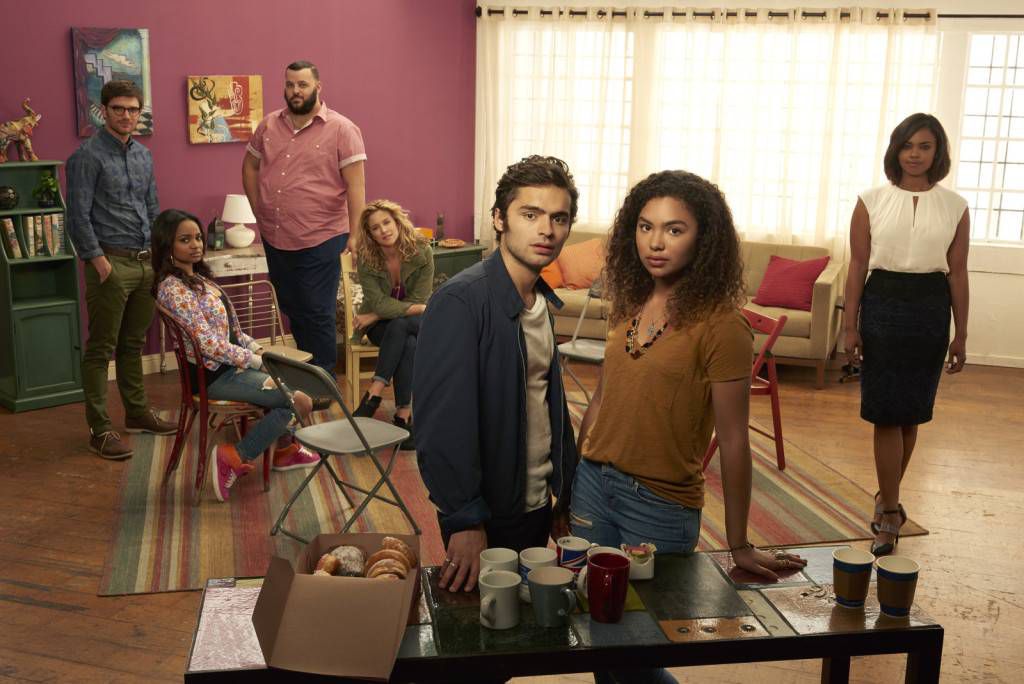 Maddie, pictured center right and played by Jessica Sula, is mixed race. Her mother, pictured behind her and played by Alexis Carra, is black and her father, deceased — a source of grief in Maddie’s life — is pictured as white in a family photo seen in episode two. Trish, shown seated on the left and played by Kyla Pratt, is black. Her high-pitched voice is enthusiastic and her energy in the character are immediate.

Stop again and look at the (partial) cast photo. It’s almost half people of color. On a television show for teenagers, as adapted from a young adult book. The impressive casting lends itself to some great acting, character development, and perhaps most important, authenticity. This recovery home is one for adults, with teens who get parental permission being admitted as well, and the ways that the various backgrounds these characters bring with them interact are important to be seen on so many levels. Addiction and mental illness are not realms of one type of person. They are the sorts of struggles anyone, regardless of their age, color, or economic background, can face.

It’s been years since I picked up the book, but reading my notes from it, as well as the reviews of other readers, suggests that the characters aren’t given explicit racial identities. Of course, the book came out prior to the more vocal internet calls for diversity, so it’s quite possible that they were rendered as people of color in subtle, ways. But being white myself and being trained as a white reader, I always cast Maddie, as well as Stewart and Trish, as shades of ivory. To be given something entirely different in visual format is an utter treat. 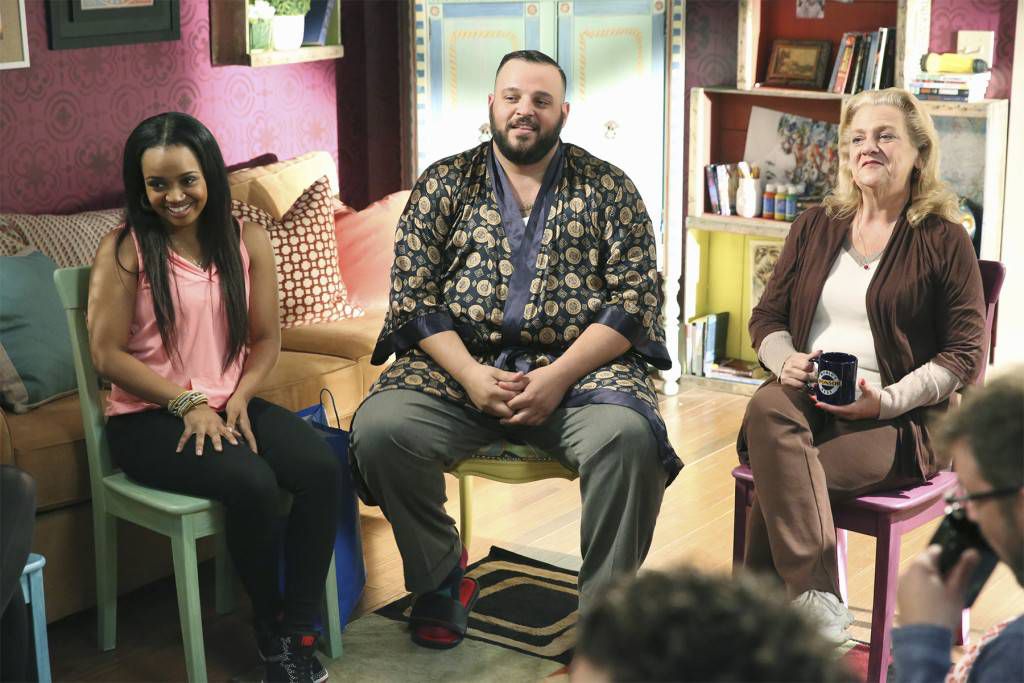 These, these are the characters whose stories I am interested in.

Sula knows how to play the role of Maddie extremely well. Her voice is a driving force through the show, but it’s in the moments where she struggles between what she knows is right (recovery) and what’s easiest (falling back into old habits) that her acting shines. It’s also here where the true teenness of the story and of the show’s appeal emerges. So frequently, we want stories to appeal to an adult audience as much as they appeal to teens when they’re adapted. But Freeform created this show and kept to the idea that teens should see other teens on screen doing sometimes dumb, illogical teen things, too. That’s not to say there aren’t consequences, but it’s in the decisions to let those teens be teens that the story resonates.

The romantic chemistry on screen is palpable. It’s also really interesting — Maddie is in a relationship with a black boy at school, but in the recovery home where she spends the rest of her time, there is sizzling hot tension between her and a white boy. It shouldn’t be impressive to see such interracial romance on screen, but it is, and more, it’s what happens on a day-to-day basis in high schools everywhere. The story being about Maddie’s recovery, about being forced into a recovery home, is what takes the focus, not race, diversity, or inclusivity.

This is how it should be.

Only three episodes in, and I’m pleased with the adaptation. The writers took the pieces of Nelson’s story that worked — the key characters, as well as the humorous elements — and wove together new plot lines, new relationships, and twists that work well in weekly installments. There’s no shying away from serious and difficult topics. In episode two, for example, we see one of the characters struggling with self-mutilation and there’s no hinting around it. It happens and we as an audience know it. Likewise, there are moments through Maddie’s detoxing and recovery where she begins questioning her own sexual history and past, wondering if what she thought she knew about herself was the truth or the story she told herself. There is a lingering question about rape, and one of the characters comforting her speaks up about how alcohol is not a free pass for consent. These moments are authentic, they’re intelligent, and they speak to the level of social understanding that today’s flesh and blood teenagers have.

I’m excited to see how this show develops and I cross my fingers it does well. Not just because I think this story is great. But a well-received adaptation like this can pave the way for more diversity on the little — and big — screens.

Haven’t read the book? You can absolutely dive right in and know exactly what’s going on. It’s likely many people won’t know it’s an adaptation anyway.