I was bummed, but not terribly surprised, to see Mr. Schruppe writing The Catcher in the . . . on the board. There really is no other book they ever want you to read. I had my own copy. It’s standard school equipment.

Everyone is required to carry a copy at all times. Hall monitors stop you on your way to class and won’t let you pass unless you show them your valid Catcher in the Rye. The Salinger Boys kick your ass and you get expelled if you’re caught wandering in the halls without one. Okay, that’s an exaggeration. We don’t actually have hall monitors at our school. But otherwise, that’s pretty much mostly almost exactly how it is. 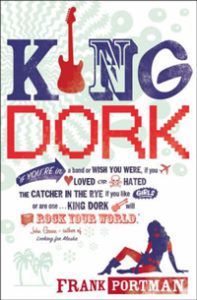 Miss Charlotte Travis (194-), my twelfth grade (1968/69) teacher got me (1951) to read The Catcher in the Rye. But she tricked me. I had a crush on her, hanging around after every class. She knew if she recommended a book I’d rush to the library and read it before the next class. Normally, I hated reading novels for school, because I resented any required reading. I would have tried harder in school if I had been smitten with more teachers. Looking back now I realized she was feeding me college freshmen books like The Stranger (1942) by Albert Camus (1913) and The Bell Jar (1963) by Sylvia Plath (1932). I wish now she had recommended a personal favorite, so I could remember her by something wonderfully unique to her generation.

Bookworms are passionate about recommending books. They want people they care about to resonate with a book they love hoping to open a psychic connection. Sadly, this is often difficult to pull off except with very popular books. The Harry Potter series allowed peers to connect and for communications channels to open across generations. That’s very rare. My wife and I read the Harry Potter books because our nephews and nieces loved them. The Harry Potter books could be the lowest common denominator novels among Baby Boomers today because of this cross-generational success.

Frank Portman sets up a clever sub-plot about intergenerational book recommendation in King Dork. Tom’s dad is dead, but he discovers a box of twelve paperbacks his father had to read in school. Tom works to conjure his deceased dad by reading those books, deciphering his father notes scribbled in the margins, and comparing his reading reactions to his father’s.

The most common types of book recommendations across generations are from parents to children, schools to students, and the past to the present. Most kids in their young adult years prefer to discover books on their own or to get peer-to-peer recommendations. I think there’s a natural tendency for kids to distrust books pushed on them in school, or by the momentum of the past, but if they love their parents they can be more open to their recommendations.

Current readers enlightened by diversity have a great deal of blowback against canonical books from the past. Even well-loved, cross-generational books like To Kill a Mockingbird (1960) by Harper Lee (1926) are under attack, see “Is It Time to Retire To Kill A Mockingbird From Required Reading Lists” by Jennifer Marer. Although I understand Marer’s point, I tend to think there’s another reason. More than ever current generation readers want to read books that speak directly about their generation. Too many books are taught because they make standardization easy for schools and colleges, so schools keep recommending old books.

It’s hard for me to understand the present generation since I’m both old and childless. I come from a rebellious generation that grew up with the slogan “Never trust anyone over 30.” Now that I’m 66, I’m not particularly trusting of anyone under 60, nor do I blame people under 30 for not trusting me.

I try to be open to some book recommendations from younger generations. I’m currently listening to The Fifth Season by N. K. Jemisin. It’s a lovely book, beautifully written, yet I struggle to enjoy the story. I believe that’s because of a generational divide. When I read The Catcher in the Rye for Miss Charlotte Travis I also found it distant and strange, even though it was published the year I was born. Well, the first time. I’ve read The Catcher in the Rye and The Bell Jar twice, once in youth and once when old.

If you haven’t guessed, I’m Book Riot’s token old white guy. I liked both Catcher and Bell Jar when I was young, but mainly because it made me feel cool to read them. But fifty years later, I felt deeply for the characters in a way that I couldn’t in 1968. That’s a generational thing too.

I can completely understand the present generation rejecting the burden of reading recommendations from the past. Marer recommends the highly praised 2017 novel The Hate U Give by Angie Thomas (1988) to replace To Kill a Mockingbird. I agree it could be a lot more relevant to today’s students. Yet, I do believe some cross-generational reading is good, but shouldn’t dominate the required school reading.

I always responded with the greatest excitement in school to works written by authors who were about 10-20 years older than our class. This didn’t happen often, but when teachers let us analyze songs by Bob Dylan (1941), Paul Simon (1941), and Lennon (1940) and McCartney (1942) it was one of the most satisfying learning experiences of the 11th grade. I remember those dittoed handouts now when I don’t remember anything else we read.

On my own, I loved 1950s science fiction because of Robert A. Heinlein (1907) but felt Samuel R. Delany (1942) defined 1960s science fiction for my generation. Again, that ten year age difference. People in their teens often admire the most creative people in their twenties. Frank Portman’s book might even be getting too old already for current high schoolers.

Like Tom Henderson in King Dork, my father died before I could know him. And I’ve tried to understand my father since by remembering the books he read, and the television shows he loved. The trouble is I can only remember him reading old paperbacks by two authors: Mickey Spillane (1918) and L’Amour (1908). Often when we do read from our parents’ generation, we prefer the writers who rebelled against that generation. Jack Kerouac, Philip K. Dick, Timothy Leary, Madeleine L’Engle, and my father were all born in the 1920s, but he wasn’t fans of their books, but I was.

My mother read Erle Stanley Gardner (1889) paperbacks when I was little, but countless mystery novelists over her lifetime. She always wanted me to read her childhood favorite, Little Women (1868) by Louisa May Alcott (1832), but I didn’t until after she died. In fact, I read three biographies on Alcott before I read her famous novel. In one, Louisa May Alcott: The Woman Behind Little Women (2009) by Harriet Reisen (19–), pointed out how generations of women passed Little Women from mother to daughter. My mother got my sister to read it, but not me. I thought it was a girls’ book. Eventually, I learned to overcome such hang-ups of my generation. I’m sorry I didn’t give up my butt-head ways before my mother died.

My sixth-grade teacher, Mrs. Saunders got me to read A Wrinkle in Time (1962) by Madeleine L’Engle (1918) in 1962. I had a crush on Mrs. Saunders too, but I believe it was Madeleine L’Engle that hooked me that time. Great writers, no matter what their generation or gender, can write for a specific time in a readers’ life that works across generations and gender. But that’s very hard to do. I believe the latest generation of writers is much better at writing for the youngest generation of readers.

But what if Tom Henderson had gone to school only reading books that were hip to his generation? He would never have found a connection with his father. He might have thought better of his teachers, but maybe not. And what were the significant novels that were written in the late 1990s that high school kids like Tom should have read? A couple years ago Deepali Agarwal created this list for Book Riot, “100 Must-Read Books from the 1990s.” I’ve only read eight. How can older generations expect younger generations to read our favorites when we don’t read theirs?

Often teachers are about 10-20 years older than their students in high school. Maybe they know which books will connect with their students better than the older generations who decide standard curriculums. Maybe we need to get away from believing every generation needs to know specific books to be well educated.

I no longer expect the books I love to appeal to younger generations. But I guess I should warn y’all, your children and grandchildren might reject the books you love so passionately now, even the Harry Potter books.