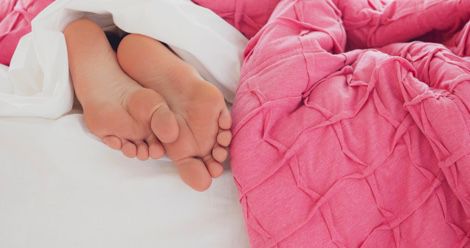 “Bright star, would I were stedfast as thou art,” I whispered into my partner’s ear like a dweeb.

I was prepared for laughter, at best. Until then, I’d always followed the advice Nicholson Baker dispenses in The Anthologist: “Never recite. Please! If you recite, your listeners will look down and play with their cuticles. They will not like you.”

(Why did I obey? I don’t usually follow the unsolicited advice of white men. Do I?)

But instead, my partner gasp-moaned. So I murmured the next lines of Keats’s “Bright Star” between gentle nibbles along their naked shoulder. “Not in lone splendor hung aloft the night,” I read from my phone, which I’d carefully positioned on a pillow, “and watching, with eternal lips apart…”

I continued to the final couplet, which I teased out slowly. I lingered over every accented syllable: “And so live ever—or else swoon…to death.” I kissed my partner, and they kissed back hungrily. As I’d read, they’d seemed increasingly astonished, and desperate, and helpless.

Suck it, Nicholson Baker, I thought as we sank into bed. I don’t need you. I don’t need any white male writers! Down with you and your patriarchal, cis hetero…

Well, Keats is different, right? Definitely the sweetheart of the Romantic set. It’s not like I’m making concessions for Lord Byron. Although, like, Byron is definitely gayer. Whatever! This isn’t about gay as in Lord Byron, this is about queer as in let’s celebrate our bodily autonomy through mutual respect and pleasure! The problem isn’t masculinity, it’s toxic masculinity! Speaking of which, I HAVE SOME GENDER ROLES TO REJECT RIGHT NOW.

But my uneasiness returned the next time I sat down at my laptop, when I did what any smug queer nerd would have done: I started a list of other love poems to recite during sex. Juliet’s “It was the nightingale, and not the lark” bit from Act 3, Scene 5 of Romeo and Juliet was a no-brainer. (It was going to be so fun to say “It is not yet near day!” the next time my partner woke me up in the morning with meowing noises!) So was that Rilke poem Henry reads Clare in Audrey Niffenegger’s The Time-Traveler’s Wife, where the narrator asks the angel about the lovers on the “unsayable carpet.” And I had to track down that one John Donne poem, what was it called? The one that when I said it was my favorite poem, my poetry professor said, “Ooooo, now we know you’re in loooove.” And I wasn’t, but I wanted to be, and that poem—“The Sun, Rising,” that’s the one—made me feel the way I wanted love to feel.

All of these poets were white, male, and dead. They might not all have been straight, but they definitely all used heterosexual pronouns in their poems. Donne was not thinking of me, a trans nonbinary bisexual glitter boi who was assigned female in 1988, when he wrote “She’s all states, and all princes, I.” He meant “princes” as in cisgender men—cisgender men with titles, money, and power. He meant that women were land, and the men who loved them ruled them.

When I realized every love poem on my list was a heteronormative poem from the Western literary canon, my first thought was, well, I must know other love poems, right? I thought of the other words I’d cherished as a closeted college student. On those late-night tumbles down YouTube rabbit holes, following a fascination I wouldn’t understand for a few more years, I discovered poets like Andrea Gibson, Staceyann Chin, Ani DiFranco. They said wild, thrilling things like “She pole dances to gospel music” and “Will the church or family finally convince me to marry some man with a smaller dick than the one my woman uses to afford me violent and multiple orgasms?” In one of the videos I watched the most, Ani warmed up before a performance of “Your Next Bold Move,” strumming her guitar and giggling about “that girl on the bus” who’d made her think, “Is she real? I’m all wet…” And as the audience roared, she grinned and yelled, “Now now, that was not vulgarity, that was poetry! Yeah, that was poetry!”

But back then, no matter how many times I heard these artists declare their desire, the poetry of queer romance felt beyond me. I still didn’t think I’d have sex until I got married. I’d once gotten in trouble for singing the Rent lyric “When Dorothy and Toto went over the rainbow to blow off Auntie Em,” but I had no idea why. From that deep in the closet, queer lovemaking seemed radical and exciting and totally out of reach. Straight lovemaking was what I knew to hope for, so Keats and Shakespeare’s assertions of love were the ones I imprinted upon. If sex was as good as “or else swoon to death” sounded, that was more than enough—right?

So why did I still turn to Keats when I wanted to recite my partner a love poem?

I think it comes down to revenge.

When I wasn’t allowed to sing “La Vie Bohème,” Romeo and Juliet was required reading. At a conservative college where the annual Rocky Horror Picture Show party didn’t even include a showing of the movie, saying I liked John Donne was kind of cute. These dead white dudes’ poems were just as steamy and over-the-top as those of the queer poets I watched on YouTube, but they were acceptable, even revered, where queer love was taboo. They were canon because words like “eternal lips apart” are explicit, but not explicitly gay.

But now that I do all kinds of things I never thought I was allowed to do, there’s something delicious about bringing the canon over to the dark side with me. Now that I know sex is everything I imagined and more, I get to repeat what I imagined it would be in the very moments I enjoy it for what it really is. I get to have something I was taught only men could have. Now that I’m not afraid anymore, I can steal their words and write my own, too. I want it all. I have it all.

Move over, John. We’re here, we’re queer, and our bright star is rising.