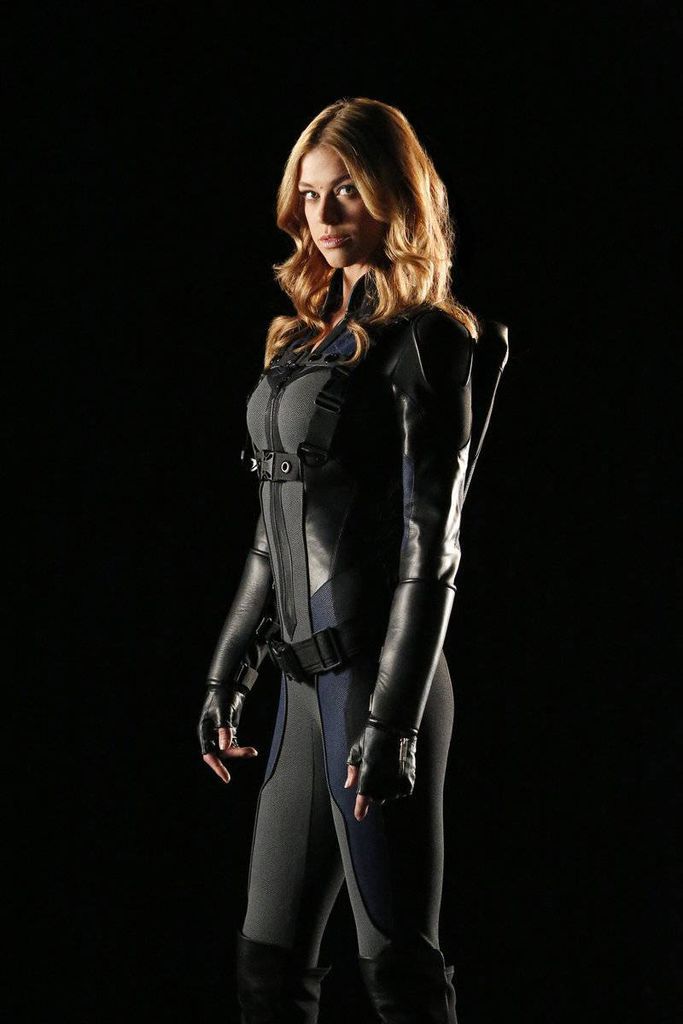 We start with Nathan Petrelli (okay, okay, Gen. Talbot) making an impassioned, if overblown, speech railing against S.H.I.E.L.D . . . and then right on cue, just as someone is trying to defend our agents, they’re hit and chaos ensues. An agent we don’t recognize tells Talbot that “S.H.I.E.L.D. is done hiding,” but we already know that Hydra’s behind this.

(As an aside, this is a really strong opening scene. The show finally seems to have settled into a good rhythm, with great, exciting hooks to draw people into each episode.)

Cut to the bus, and Skye and Simmons are watching Ward on a screen and discussing the lengths they’ve had to go to in order to get intel. It seems as though Skye has gotten over her anger toward Simmons now that she knows how big of a risk Simmons took in infiltrating Hydra. Or maybe Skye’s just doing her best to suppress her abandonment issues. May interrupts girl time with the news that there’s been an attack on the UN.

Coulson tells us what we already knew—that the attack was Hydra impersonating S.H.I.E.L.D., and Simmons recognizes the weapon as something she saw in Hydra’s files. The weapon’s founder, Toshiro Mori, lives in Japan, and it’s up to Bobbi, May, and Hunter to shut him down.

It turns out Talbot survived the attack, and he has a very interesting conversation with his mystery Senator supporter (played expertly by Peter from While Collar!) and Talbot makes tantalizing references to the Senator’s brother. Talbot displays surprising intelligence by saying he wasn’t sure S.H.I.E.L.D. was behind the attack. And then the camera pans to the senator’s name.

“Guess being a douchebag runs in the family.” Well said, Skye (as she watches C.Ward launch a war against S.H.I.E.L.D.)

Bobbi and Hunter provide an adorable and hilarious awkward interlude (yet another example of how Agents of S.H.I.E.L.D. is focusing on and developing its characters this season, and it’s really great), and then Bobbi asks May if she’s ever been married. AND SHE HAS. I sense an upcoming plot thread at some point.

And then we’re back to the bus. A sweet, but somewhat painful scene between Fitz and Simmons takes place in which we really see how broken their relationship is. Simmons and Fitz were so in sync last season, finishing each other’s sentences to the point where I didn’t know which was Fitz and which was Simmons for at least the first few episodes of the show. Now, Simmons is hindering rather than helping Fitz; it’s clear they aren’t just going to fall back into old habits naturally. There’s too much pain and hurt there.

Our Ward reveals to Skye that C.Ward is really after him and warns her that he enjoys hurting people. Meanwhile, Bobbi gets the info the team needs, and after some bickering with Hunter, the team heads to Belgium to prevent Hydra’s next attack.

In many ways, Fitz has become the heart of the show, and never was that more clear in the next scene, when Fitz confronts Simmons for leaving.

And then just when it seems they’re going to have a breakthrough, Simmons throws her hands up and leaves. It’s been difficult to understand her motives for staying away, and it’s hard not to despise her just a bit right now, even though I love the character.

Coulson shows up in C.Ward’s office and tells him that he has Ward. An interesting mix of scenes follows where, basically, C.Ward calls into question everything Ward has told us, while Ward is trying to convince us (through Skye) that C.Ward is really an evil monster. They’re each claiming the other is the horrible, twisted one. My gut here tells me our Ward is telling the truth, but as C.Ward didn’t betray his friends and colleagues, Coulson’s understandably inclined to trust the respectable senator over the Hydra traitor.

Ward tells Skye that her mother is dead, and that he doesn’t know what her father is (or at least implies that). I’ve been willing to give Ward the benefit of the doubt because of his horrible past (which now has been called into question), but he gets really slimy talking to Skye about her father wanting to put his family back together. Her father didn’t just “crack”; he’s killed a lot of people, and Skye’s seen the latest aftermath with her own eyes.

Skye drops the bomb then that Coulson’s brokered to transfer Ward into his brother’s custody. AAAANNND you can actually see the devious gleam fall out of Ward’s eyes. It’s a great acting moment. Coulson also has a great moment with Ward, which was really satisfying.

The team realizes that the entire Hydra assassination plot was really a ruse to lure what few remaining S.H.I.E.L.D. agents there are left out into the open to be murdered. Bobbi and May kick some major ass (Hunter helps) and neatly wrap up the episode’s main storyline.

There’s a great scene between Al and Simmons, and Simmons reveals the reason she left—because she thought she was making Fitz worse. It’s clear how much Simmons cares about Fitz and that she wants to do the right thing by him, but just doesn’t know how. It’s heartbreaking, especially because what’s done is done, and there’s nothing she really can do now.

The episode ends with a well-done montage; Ward’s been handed over to C.Ward, who got some great speech out of it, and it looks like Talbot’s made peace with S.H.I.E.L.D. And all is well.

Except Ward breaks out of his handcuffs and it looks like he’s going to escape. THE PLOT THICKENS.

So with that, we wrap up another episode of this series, which just is getting better and better this season.

(1) What do you think is going on with this Ward/C.Ward situation? What is Ward up to? Who’s telling the truth? When is Ward going to finally let go of the facial hair?

(2) Do you think there’s any coming back for Simmons and Fitz? Or is Al Fitz’s new Simmons? Simmons said she left because she was making him worse. Is that the full story or is there more to come?

(4) What is Skye’s father? Is he an alien? Is that why Skye hasn’t reacted poorly to the serum?