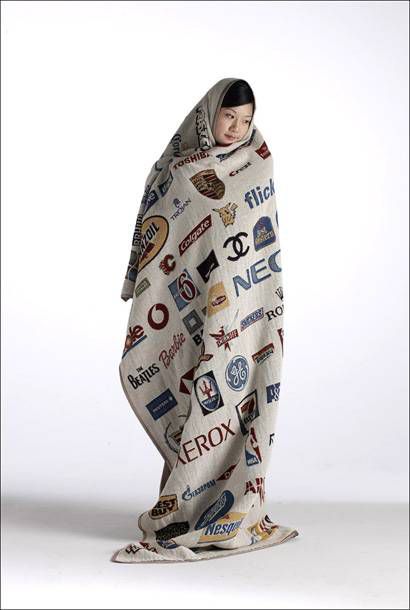 In Jeff’s most recent Dictionary of Fictional Techniques entry, he talked about Proxy Detailing — something he is not at all a fan of. This is Jeff’s term for when an author uses a brand name as a stand-in for a a longer or more detailed description of the object in question. I wanted to take a second to write about when, and why, this technique can be an effective choice, especially in self-consciously contemporary fiction.

The example I draw on here is JPod by Douglas Coupland (the illustration to the left is another Coupland work, an art project called Corporate Safety Blankets). JPod is about a group of junior programmers in Vancouver as they work on a new, probably pretty terrible game and try to make sense of their largely pointless lives. They make meaning and develop identity from branding, so the branding becomes essential to the world-building in the novel.  They reference Subway specifically because the cultural associations with The Subway Diet are important to one character; likewise they reference the Gap as a shorthand for the national placeless sense of style the Gap embodies. If an author wants you to think not only of the object but of the cultural baggage associated with the object, Proxy Detailing can be an effective means of accomplishing this.

You can tell me a character drives a hybrid car, but if you tell me a character drives a Prius, I have a much different mental picture; there’s some smugness, now, and a holier-than-thou attitude that isn’t exuded by a less defined eco-chic branding choice. (Which is another reason Proxy Detailing can fail — if you haven’t thought through the cultural invocations of the brand you invoke and don’t have a clear sense of your audience, you’re not doing it right.)

All the problems Jeff details in his post are true. Writers risk alienating readers who aren’t familiar with the branding they reference, and they risk dating the book to a particular cultural moment. But what if both those things are precisely the point? Brand-referencing can be a way of creating in- and out-groups intentionally; in the case of JPod, the in-group are members of the tech world (at a very specific socio-economic level that excludes management). Their reference points make sense to them, and there is an intentional disregard for inclusivity; this is a group of people who, in the novel, are exiled and feel deeply excluded from other aspects of contemporary culture.

There’s a hyper-contemporariness to the choice, too. No, a novel that involves a long treatise on Zima is not going to be a timeless or ageless classic. But if the writer’s goal is to chronicle a specific cultural moment, then that kind of ephemera is part of building the moment, particularly in a moment when branding is a significant marker of identity for many people. My pink plaid Converse shoes say something different than a pair of Vans would. That distinction can be generational and audience-specific, but when a writer effectively taps into it it can be very effective.

With JPod, audiences had a chance to see just how important the branding in the novel is when it was stripped away for the CBC Television adaptation. In JPod, another really effective side-effect of Proxy Detailing is that it makes the world of the text concrete and real for readers — you can drink that coffee and eat that sandwich — so that when the plot spins off into a left-field Coupland-gasm of ridiculous awesomeness, you’re grounded in reality. Stripped of those markers, the TV show (which used fake brands as stand-ins for the real ones in the novel, I assume because of concern from advertisers about things like referring to McDonald’s repeatedly as “The Taint”) seemed like a giant cartoon and lost a lot of its impact. And ultimately failed, but that can be as much about trying to be a Canadian TV show in Canada as anything.

So there’s some thoughts about when Proxy Detailing can be a good choice.  Any other examples you can think of?