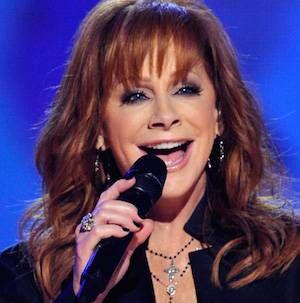 Most writers have beloved books that made us the writers we are today. They were first teachers, the stories that made us want to write. And I have those, for sure:  A Tree Grows in Brooklyn, Ellen Gilchrist’s short stories. But before those books sparked my writing life into existence, my earliest teacher was Reba McEntire.

I grew up with the knowledge that I was adopted, but as a child, the concept was a bit mysterious to me, so one of my favorite games was to pretend that my parents wouldn’t want me anymore, and Reba McEntire would adopt me and have child-sized versions of all her show costumes made (because she absolutely wore those around the house), and we would duet and then ride horses.

My dad used to do a radio show from our living room, and during the day, his microphone and sound system sat untouched. I loaded Reba’s tapes into the deck, and played them loud, and sang into the dead microphone, letting my voice mingle with hers, imagining myself a show queen.

I listened to her albums on cassette endlessly, memorizing her songs. I practiced her trademark growl, her hard R’s, her vowels that rounded out like ice cream being scooped.

But while as a child, I wanted to be Reba, as I grew up, and grew into a writer, I began to notice the effects her music had on my writing and reading lives. My MFA thesis was a collection of short stories, all told from a female point of view. My thesis list was comprised almost entirely of books by women, and my advisor made me add some men to round out the collection.

Reba’s career has been almost entirely dedicated to songs about women, about uniquely female experiences. In an interview (done ages ago) with the Chicago Tribune, she said that she was interested in women’s stories. When speaking about those women, and about her song choices, she said, “There’s a lot of women out there who just want to have that three minutes of rebellion,” a rebellion she illustrates and offers to them in her songs.

I came to understand women through her music. I learned about doubt and fear and infidelity in “Whoever’s in New England.” I felt the shame, the worry and hope and scrappy determination deep in my bones every time I heard “Fancy.” My sister and I sang “Does He Love You” on my karaoke machine, and I learned about the ways women distrust each other, the way the villain can become blurred. In “And Still,” the ultimate missed connection, I learned about expectations and disappointment.

I was in fifth grade when Reba’s cover album, “Starting Over,” came out. The title song, originally recorded by Dolly Parton, told the story of a woman coming to terms with her parents’ divorce. My own parents were divorcing, and though I was still very much an child, that song gave words to my feelings, which were too big for me to articulate.

The list could go on and on. But as much as Reba’s songs provided me an education, her videos did even more. When Vince Gill was asked to record a video with her for their duet “The Heart Won’t Lie,” he did so begrudgingly because he knew it would be “an epic.” And it was – she did a military tie-in. Her songs were merely thematic springboards for her videos, which reimagined plot lines, characters. The story became more dramatic, more nuanced, more emotional when you watched Reba’s, yes, epic music videos.

In 1996, Reba cut her hair. And like Samson, she lost her strength, at least my opinion. Maybe it was just me growing up, growing away for awhile, but Reba and I lost touch. Her songs didn’t resonate for me like they used to. It would be years before I returned to her. And when I came back – as an adult, as a writer, I found that old artistry, that verve and storytelling. I found my old teacher.

In those early years, when I had my eyes closed and I was singing into a powered down microphone in my living room, I was learning to be a reader and a writer of women’s stories. I was learning to play with theme and plot. I was learning to create big characters, to take chances, to give voices to women who society might look down on. Reba introduced me to a broad spectrum of emotion. And the same way that, when I was a teenager and I read A Tree Grows in Brooklyn every year, I understood some new aspect of the emotional journey – so it was with Reba’s songs. I understood some deeper level of the emotion, the story, the women. Year by year, song by song, Reba made me the writer I am today.