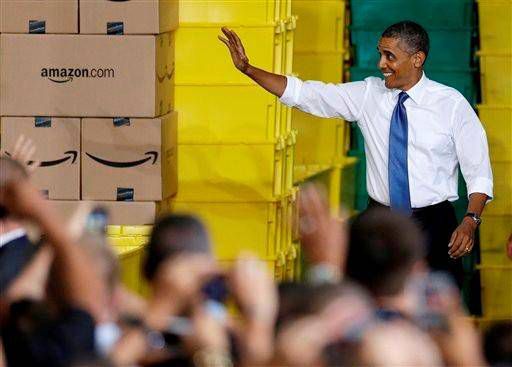 On Saturday, industry trade publication Shelf Awareness ran a special weekend issue to report that Amazon had cut prices lower than ever in order to compete with Overstock.com. The headline was “Amazon’s ‘Declaration of War,'” taken from a quote attributed to Jack McKeown, president of Books & Books in Westhampton Beach, NY. Shelf Awareness later changed the headline and pulled the quote without issuing a retraction or correction (see both versions here), then added an endnote to the updated edition yesterday morning after I and other members of book industry media questioned the changes.

The sentiment of the original headline, while sensational, is not unusual or remarkable. It’s no surprise that independent booksellers are angry at Amazon, pissed about their practice of using books as a loss leader, and concerned about the future of the publishing industry, especially insofar as the future of publishing is the future of independent bookstores. Indies cannot afford to offer the kinds of deep discounts Amazon can because indie bookstores rely on profits from book sales in order to stay open. Emotions were already running high.

And then the White House announced that President Obama was scheduled to visit an Amazon fulfillment center in Chattanooga, Tennessee to give a speech about job growth and the economy, and the bookternet went positively batshit.

At GigaOM, Laura Hazard Owen presented a more complete picture, citing a quote by White House deputy press secretary Amy Brundge, who explained that Amazon’s Chattanooga facility “is a perfect example of the company that is investing in American workers and creating good, high-wage jobs,” alongside reports of alleged mistreatment of workers at an Amazon facility in Pennsylvania. Still others speculated that Obama’s selection of an Amazon facility as the site of his speech was due to Amazon’s recent promise to create more than 5,000 new jobs, or CEO Jeff Bezos’ contributions to the Obama campaign. Interesting stuff, that.

Many booksellers tweeted, blogged, and wrote letters/emails to the President to express their concern about his decision to speak at Amazon. The American Booksellers Association goes into detail here.

And this all happened before Obama even gave the speech, which you’ll find below. Here’s the transcript.

The main thrust here is that to secure a better future for the middle class and to grow the economy for everybody, we need to create opportunities for anyone who is willing to work to have a good job with a fair wage in a “durable, growing industry.” We need to call on companies to do more for their workers, and the President cites Amazon as “a great example” because of the Career Choice program that offers extensive tuition reimbursement for employees who want to develop skills in fields with high demand (CAD and nursing, for example).

Are jobs at Amazon really good? Are the wages they pay really fair? These are valid questions. There are many reasons to ask them. Those reasons extend far beyond Amazon’s impact on independent bookstores. Amazon is going after everybody, not just publishing.

So if we can assume, and I’m confident we can, that the President doesn’t hate indie bookstores, why would the Obama administration choose an Amazon warehouse as the site for this speech?

1. The Obama administration needed a company that exemplified the values the President emphasized in his speech. Amazon appears to satisfy this requirement.

The working conditions and wages at Amazon may be questionable, and it would certainly be interesting to know if President Obama is aware of the allegations against Amazon, but that they are creating jobs and offering their employees benefits is undeniable. Are these actually GOOD jobs? Maybe. Are there alternative sites? Sure there are. I don’t know nearly enough about American manufacturing to identify other potential sites, but I’m certain they exist.

Do I personally think Amazon was a good choice? No, I do not. I have a lot of problems with the way Amazon does business, so I don’t do business with Amazon. I’m an upper-middle-class American with a good job and a double-income-no-kids household. I spend my book dollars primarily at independent bookstores, even when that means paying higher prices (and it usually does), because I believe it’s an investment, and it’s an investment I can afford to make. That’s a privilege, and I recognize that I have it.

2. The Obama administration needed a company that is highly visible and recognizable, and which many Americans like. Amazon fits the bill. It is no longer just an online bookstore, even if that’s how it began. For many consumers, Amazon is the first stop for just about everything. A cheaper book, a cheaper hammer, a cheaper jar of protein powder, a larger selection than you can find in any brick-and-mortar store. If cost is a consumer’s first or primary concern, Amazon is likely their first choice.

We don’t have to like that this is the state of the world. Small business owners in particular have every right to be worried, and it’s absolutely fair for them to criticize the President’s choice. Christine Onorati, owner of WORD Bookstores, wrote on her blog:

Reading the transcript of Obama’s speech literally makes me feel like I’m reading an Onion piece, or a sci-fi novel. It just doesn’t seem like it could be true. How could we be so out of sync, me and my President? Amazon is actively going after Main Street after Main Street in every town in every state in this country and I am pissed off about it….Hearing my President talk about Amazon as a hero effects [sic] me in a real way.

So, what should those of us who don’t want to live in a world where Amazon is the only option do going forward?

1. We should stop assuming that consumers who choose Amazon are uneducated or uninformed. Booksellers and members of publishing media are guilty of this all the time. I have been guilty of it in the past. It is important to educate customers about their choices and the consequences of the decisions they make as consumers, and it is equally important to do so in a way that doesn’t blame consumers for businesses’ struggles or shame them for being price-conscious.

2. We should focus on what Amazon can’t do. Indie booksellers cannot compete with Amazon on price, but they offer incredible value to their communities. We should focus on this. We should shout it from the rooftops. We should give the book-buying public as many reasons as possible to love their local bookstores and to be willing to pay full or near-full price for their books in order to keep these businesses open and thriving.

3. We should get reasonable and rational in how we talk about Amazon. We should start by dropping the word “evil” from our vocabularies in these conversations. Let’s reserve “evil” for people who cause mass destruction and loss of life. You know the kinds of people I’m talking about. This is publishing. Livelihoods are at stake, but people’s actual physical lives are not. Jeff Bezos is a very smart man playing a very long game, and he may be ruthless, but he is not evil.

So enough with Pandering Link Bait headlines and advocacy dressed up as reportage. They aren’t doing the publishing industry, book media, or indie bookstores any favors. We are better than this, book people. If we want consumers to take us and our concerns about Amazon seriously, we need to start acting like we deserve to be taken seriously.

President Obama doesn’t hate indie bookstores, but he’s not going to go out of his way to save them, either. If we–as customers and business owners–want independent bookstores to continue to exist, it’s up to us to make that happen. If independent bookstores are going to win, they’re going to have to win not by virtue of a detailed, ongoing taxonomy of the ills of Amazon but because of what they have to offer. And that’s a hell of a lot.