I’ve been glued to the FX series American Crime Story: The People v. O.J. Simpson—not only because of the [largely] excellent acting and unfolding drama, but because of the question, “Wait, did that really happen?” I was in high school when my social studies teacher wheeled a big old tube TV into the classroom and basically had us watch the O.J. trial for an hour a day, week in and week out. But once I started watching the series, I realized how little I remembered—or maybe ever knew to begin with—about the crime and trial “of the century.”

I can’t go an episode without stopping at least three time to Google—whether O.J. really left a suicide note claiming that “at times [he] felt like a battered husband” (he did); or if Robert Shapiro really tried on that glove in court (he didn’t). Did Marcia Clark spend a weekend with Christopher Darden in Oakland? Yes! Did Robert Kardashian really beg O.J. not to kill himself in Kim’s bedroom? Yes! Did he subsequently take his children out to lunch on Father’s Day and give them that rousing “Fame is fleeting” speech? Nope. (But could David Schwimmer smell the Emmy nomination on that one when he read the script? I think we all know the answer to that.)

Anyway, the show is candy for someone like me who enjoys reading both thrillers and true crime, but in the end I find myself wanting to know the real stories, unembellished by screenwriters, actors, and directors, and told in the players’ own words. So I started looking for books written by the real people involved, and there are a LOT of them. Like, hundreds—from tabloid-style “I helped O.J. get away with murder” and exploitative “true” tales of hangers-on in the O.J./Nicole circle, to critically panned books by Johnnie Cochran and Robert Shapiro that don’t seem to cast any new or relevant light on what I already know.

After my deep dive into O.J.-land, these are the four I’m interested in reading, and that might paint a clearer picture of all the facts . . . or not. 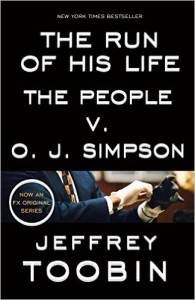 The Run of His Life: The People v. O.J. Simpson by Jeffrey Toobin

This is the book on which the series is based. Toobin himself is a credited consultant on the show, though he has acknowledged that the TV show “is not a documentary.” Now I’m curious to read the book and get just the facts, ma’am, from Toobin’s relentlessly reported, widely praised “nonfiction masterpiece.” 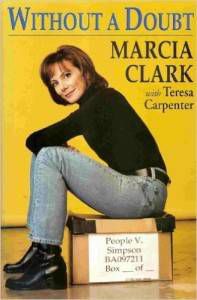 Without a Doubt by Marcia Clark with Teresa Carpenter

Part memoir and part exhaustive case study, Marcia Clark’s #1 New York Times bestselling book about trying (and surviving) “The Trial of the Century” is the only account by a female attorney in the courtroom. (The other female attorney was Shawn Chapman Holley on the defense team. She has not written a book about the trial, but she did go on to be Lindsay Lohan’s defense lawyer. These are the things we learn when writing for Book Riot, people.) When the case was being tried, race and celebrity were the flashpoints on which most of the arguments—and public opinion—were built. But the FX series has zeroed in quite forcefully on the sexism that was also at play in the courtroom, and Clark is the only one to give voice to that bizarre and undignified angle of the story. 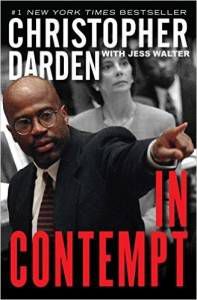 In Contempt by Christopher Darden with Jess Walter

Another #1 New York Times bestseller, Darden’s book is a behind-the-scenes look at not only the trial itself, but his personal role as foil to Johnnie Cochran. Though Marcia Clark was the lead prosecutor, all eyes were on the two African-American lawyers, battling it out on two sides of the table over the fate of an African-American defendant. Darden was accused of being an “Uncle Tom” on the O.J. case, but famously and consistently put justice ahead of all other issues, including race. (P.S. according to Wikipedia, the co-writer is that Jess Walter!) 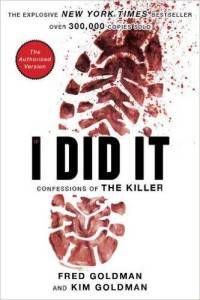 If I Did It: Confessions of the Killer by O.J. Simpson, with contributions from Fred Goldman and Kim Goldman

Oh, what a tangled web we weave: When first we practice to deceive. . .

In what is one of, if not THE most f*cked up publishing story of the century, HarperCollins commissioned O.J. Simpson’s own account of how he would have committed the murders if he had committed the murders. What the what?!? Harper eventually thought better of it and cancelled the book (and fired notorious publisher Judith Regan over the whole fiasco), but the Goldman family, who viewed the manuscript as a clear, nonfiction confession, fought to have it made available to the public. A judge awarded them all rights to the manuscript, which they published in full (all of O.J.’s words were approved by the Juice himself), along with additional essays and commentary by the Goldmans. But tellingly, the book’s cover now prints the word “If” in minuscule font, inside the “I.” Go on, see if you can find it.

(And if you want to go further down this particular rabbit hole, this E online feature on the facts v. fictions of the FX series is my new favorite link.)