Penned in Don Quixote is the proverb “El que lee mucho y anda mucho, ve mucho y sabe mucho,” which translates to “He who reads a lot and walks a lot, knows a lot and sees a lot.” How beautiful and poetic is that? I would have to agree with the proverb, and I would also say that Don Quixote is a masterpiece of literature. Often; however, great works by Hispanic authors are overlooked.

I have seen countless book lists that almost always list great literature as written only by authors who are white, as if authors of color have never existed. Rarely do I ever see book lists of incredible reads by Hispanic authors. Historically, Hispanics have been marginalized, and quite frankly I am exhausted from trying to convince others that Hispanic authors have put together some of the greatest books. Call it bias if you will, but I call it passion. I have compiled a small list of great books that I recommend you read. Why not start during Hispanic Heritage Month? In no particular order, here they are: 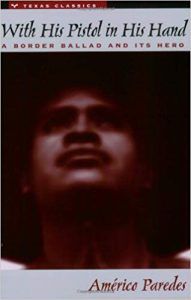 With His Pistol in His Hand: A Border Ballad and Its Hero by Americo Paredes

If you have no idea who Americo Paredes is, then I suggest you learn right away. Paredes is recognized as one of the seminal Mexican American scholars of the twentieth century. He spent most of his academic career at the University of Texas at Austin. In 1967 he helped found the Center for Intercultural Studies of Folklore and Ethnomusicology there. During the 1960s he also fought determinedly for creation of a Mexican American studies program in spite of discouraging anti-Mexican attitudes within the university. With His Pistol in His Hand is the story of Gregorio Cortez, the Tejano hero of a border corrido (ballad). Cortez was virtually unknown in Texas until, in 1901, he and a Texas sheriff engaged in a good old fashioned shootout after a misunderstanding. The sheriff was killed and Gregorio fled immediately, realizing that in practice there was one law for Anglo-Texans, another for Texas-Mexicans. The chase and capture of Cortez became legendary across Texas—so legendary that until this day the heroic tales of Gregorio Cortez can still be heard  in the cantinas (bars) along both sides of the Rio Grande. This is my all-time favorite book, one that deserves much praise. I highly recommend it. 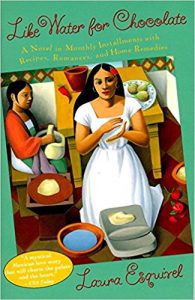 The cultural significance of this book is unparalleled. What else can I really say about how amazing this books is that has not already been said? The movie was not so bad, but it really does the book no justice. Tita, the youngest daughter of the all-female De La Garza family, is confined to caring for her mother until she dies and is forbidden to marry, as per Mexican tradition. But of course Tita falls in love with a man named Pedro. Pedro is easily seduced by the amazing food Tita cooks and is infatuated with her more and more as each day passes. Out of pure desperation, Pedro instead marries Tita’s sister Rosaura because that would mean he could be so much closer to Tita. Their love for each other never dies, and only after multiple tragedies and a spell of good/bad luck are they finally reunited. This book is one-of-a-kind and one that deserves to be on every single “must read” book list. If you love magical realism, then this book is for you. 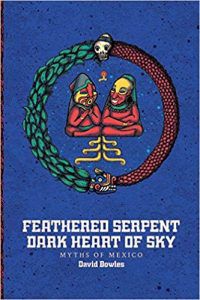 You may be familiar with Greek, Norse or Egyptian mythology, but have you ever considered the mythology of Mexico? Feathered Serpent, Dark Heart of Sky traces the history of the world from its beginnings in the dreams of the dual god, Ometeotl, to the arrival of the Spanish conquistadors in Mexico and the fall of the great city Tenochtitlan. Bowles does an amazing job of retelling Mexican mythology in a way that readers will be drawn to.  Bowles states that it was not until college that he first read a single Aztec or Mayan myth. I had the same experience, even though I grew up in a border town and attended a university that was predominantly Hispanic. The importance of this book needs to be discussed. From Kirkus: “Bowles’ dense yet lyrical prose raises the narrative to a level suited to high mythological tradition and illuminates the foundations on which contemporary Mexican culture is laid. Students of folklore will find a rich trove to mine here.” This is a great read that everybody will enjoy. Do it now! 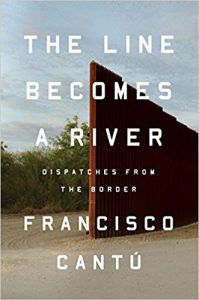 The Line Becomes a River: Dispatches from the Border by Francisco Cantu

The cultural significance of this book is undeniable. Given how border issues are a contemporary topic, The Line Becomes a River is relevant because it highlights not only the difficulties of policing the border, but the difficulties of witnessing immigrants traverse literal death traps  as they make their way into the United States. Francisco Cantu is a former U.S. Border Patrol agent who worked the U.S.-Mexico Border in Arizona and Texas. His dispatches from the border are eye-opening and leave you feeling a multitude of ways. Being Hispanic, Cantu assumed that policing the border would be the answer to all of the border questions he was so perplexed about. The border, however, proved to be an enigma that he was not prepared for. From arresting immigrants and drug smugglers to witnessing countless dead bodies, Cantu’s experiences are mesmerizing. This is a book you will not be able to put down. From Esquire: “A must-read for anyone who thinks ‘build a wall’ is the answer to anything.” Pick this one up today and enjoy. 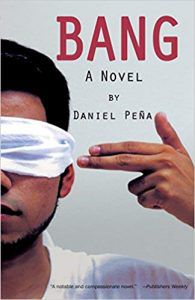 Bang: A Novel by Daniel Pena

Although Daniel and I had a constructive disagreement on Twitter once (good times, Daniel), this did not take away from how much I enjoyed his book. Bang is an excellent novel set in the town of Harlingen, a town that is situated only a few miles from the mighty Rio Grande in Deep South Texas. Although this book is fictional, the fate of the family in Pena’s book is a reminiscent fate of the many families who have suffered at the hands of violent Mexican drug cartels. They are forced to do dangerous, unimaginable things. Uli and his brother Cuauhtemoc are involved in a plane crash along the U.S.-Mexico Border one late night. Cuauhtemoc awakes and realizes he is bound and gagged. Is he in Mexico or the U.S.? He is unsure. Uli wakes up in a hospital and is also unsure of which country he is in. Given that Uli is an undocumented immigrant, he prays that he is in a U.S. hospital, but it doesn’t take long for him to realize he is in Mexico. Their mother Araceli hears of the crash and risks her own status by crossing into Mexico to search for her two sons and her husband who has been missing for some time. In Mexico, each is forced to navigate the complexities of their past and an unknown world of deprivation and violence. From Kirkus: “A piercing tale of lives broken by border violence.” This book is a great read that details the struggles many actual undocumented immigrants face. I highly recommend this one.

There are thousands of great books written by Hispanic men and women whose talents are often passed over. Despite overwhelming positive reviews, most people never categorize their works as great. It is important to recognize authors of all color, background, religion, ethnicity, and sexual orientation for their body of work and for the amazing books they publish. If this list doesn’t do it for you, then compile your own list, but give Hispanic authors a chance. You will not be disappointed.