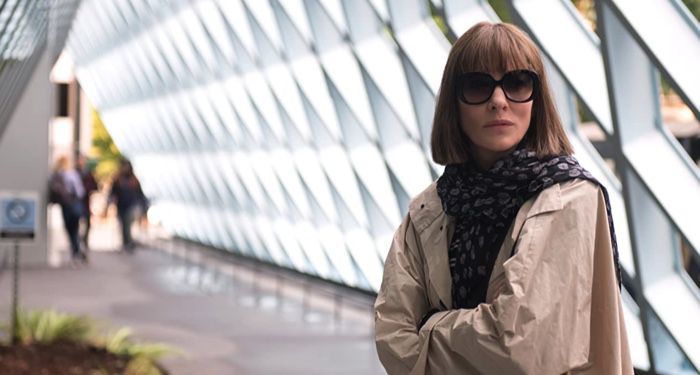 When Maria Semple’s Where’d You Go, Bernadette was first published in 2012, I distinctly remember it being a book that people either loved or hated. I myself didn’t even get to it until 2016, partly because of the mixed reviews and partly because the premise just sounded…a little out there. I definitely enjoyed it more than most people on my Goodreads feed, but I could also totally understand why it received such largely mixed reviews from readers, because it’s a novel of fiction written in a unique epistolary style that one either loves or hates. Still, I remember being entertained by it and went to see the 2019 film adaptation, starring Cate Blanchett, Billy Crudup, and Kristen Wiig, the first chance I got. Interestingly enough, it ended up being the last movie I journeyed to see downtown before the pandemic, since it wasn’t playing in the suburbs, which in retrospect feels oddly prophetic.

I tend to be more critical of a book’s film adaptation when the book is still fresh in my memory, which wasn’t the case with Bernadette — it had been three years since I’d read the book and while I remembered the gist of things, I’d read a lot of other books in that time. I enjoyed it enough to watch it again with my mom once it became available to stream, which happened to be during the very first pandemic lockdown in March 2020. Inexplicably, we found ourselves returning to it over and over again as Miss Rona proceeded to pull us in every which way she wanted thereafter. Somehow, a story about a socially anxious wife and mother who left a high-profile career as an architect to become a recluse in a former Catholic reform school for girls converted into a home resonated in a particular way last year. I had already suffered from anxiety, OCD, and intrusive thoughts for most of my life, but the pandemic made them feel like a mental illness for the first time.

Where’d You Go, Bernadette is undoubtedly a story about the cultural judgment that happens when a wife and mother doesn’t measure up to a certain standard, especially in the gossipy parking lots of private schools, but it’s also an imperative look at the many ways our society still has a long way to go with dismantling the stigma surrounding mental health and illness, especially for women and mothers. Aspects of the book had surely resonated with me in a similar way as a chronic anxiety sufferer, but only upon multiple viewings of the film adaptation did it eventually help me name a lot of the inner monsters and demons that started appearing last year. Especially after those initial lockdowns started to fade and we suddenly had to find a way to carry on in our everyday lives while avoiding a deadly virus still wreaking havoc in the background. “I just need you to know how hard it is for me sometimes,” Bernadette tells her daughter Bee (Emma Nelson) in the car one day. “What’s hard?” she asks. “The banality of life.”

I’ve never described myself as suffering from social anxiety, but as a professional introvert, there is a certain amount of it that I was simply born with. It’s not so much that the pandemic reinforced whatever social anxiety I did have, but more that the uphill battle I was facing every day with my mind and my intrusive thoughts regarding my own safety during an unprecedented global health crisis just left me without any other energy to devote to things that really didn’t drain me all that much pre-pandemic, even as an introvert. It was Bernadette, again, who finally helped me name these symptoms, which also explained a lot in terms of how short-tempered I can be when I’m anxious — I just have no energy left for banalities that appear to come so easily to others. Bernadette specifically makes reference to a “black hole of visceral panic” that can arrive in the middle of the night over something as insipid as packing more fresh fruit in her daughter’s lunch, and before she knows it her energy source has been completely drained. “There go the dishes, there goes the grocery store, there goes exercise, there goes basic human kindness.”

As a result of suffering from OCD, I have a built-in habit of assuming everything is my fault, so on top of the inconceivable amounts of stress we’ve had to hold over the last year, I was also busy silently blaming myself for a general inability to function normally as a result of my own black holes of visceral panic. Despite the fact that everything I was feeling was caused by something so far out of my control. I soon realized I had to start forgiving myself. But then repeated viewings of Where’d You Go, Bernadette soon then led me to question — did I deserve to feel shame for any time that I felt this way pre-pandemic? Does anyone? Of course not. But I did, and still do. Bernadette’s story just once again reinforces how much farther we have to go with the stigma surrounding mental health, especially when we’ll no longer have a pandemic to blame our struggles on.

I ended up reading Bernadette for a second time about a month ago, since so many viewings of the film adaptation led me to want to refresh my memory of the book. I now understand the mixed reviews a lot better, since not only were there a lot of unnecessary details from the book that were rightfully cut from the adaptation, but the movie is just a thousand times better. And that’s okay! A movie is allowed to be better than its book sometimes, especially when the film adaptation really captures the core of the story: that staying inside and ordering things you don’t need off of Amazon is a perfectly acceptable lifestyle, because other people are annoying and germy.