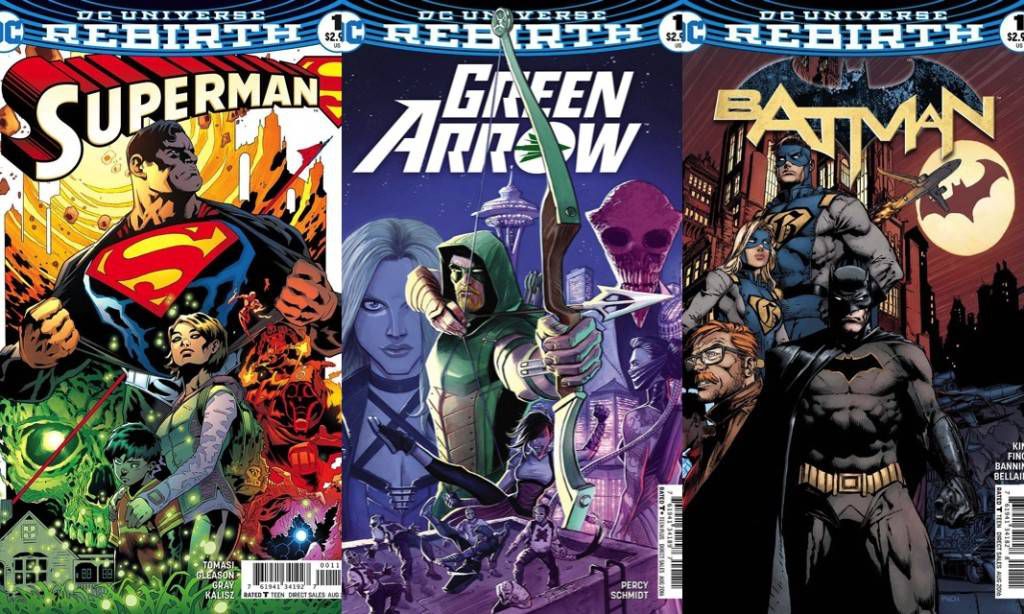 My epic journey through Rebirth continues! Did you miss Week One or Week Two? Check out what I thought, then come on back so we can get into this week, which starts off the first wave of double shipping with some familiar faces from Week One, plus a new addition:

After the quiet, contemplative breather that was Batman: Rebirth, King kicks off his ongoing story with a literal bang, as Batman catapults himself onto a plane that’s about to crash into a populated area of Gotham and tries to redirect it into the harbor. It’s silly and serious and action-packed in a very Batman: The Animated Series kind of way, and Jordie Bellaire’s orange-tinged buildings and deep green skies give Gotham a compellingly feverish, poisonous cast, but the book is dragged down by Finch’s messy anatomy and static layouts. It’s a minor silver lining that the book has no women in speaking parts so that his worst anatomical excesses are saved for a single miniskirted figure at the end. Wait, did I say “silver lining?” I mean what the hell.

Ollie starts investigating the corruption in Seattle and his own company with the help of Black Canary and his younger half-sister Emiko, but the assassin Shado is waiting in the wings. This is still the prettiest book coming out of Rebirth and I’m in love with how Percy writes Ollie: passionate, impulsive, well-meaning, and kind of a dunderhead. Using Shado and Emiko makes it less of an on-ramp for new readers than the Rebirth issue, but the relationships aren’t hard to puzzle through. Points docked for somewhat clumsy dialogue throughout, but this book is staying on my pull list for the foreseeable future.

The Stack Newsletter
Sign up to The Stack to receive Book Riot Comic's best posts, picked for you.
Thank you for signing up! Keep an eye on your inbox.
By signing up you agree to our terms of use
Good for Newbies? Ish.
Good for Oldbies? Yep!

Newbie GLs Simon and Jessica head out on their first mission together, tracking down a renegade alien on earth. Our heroes’ personalities are clear and their squabbling feels organic, but any good buddy cop story needs some levity, and this book is all grimaces and gore when it’s not wallowing in Lantern Corps mythology. It’s by far the most diverse book out of Rebirth so far, with an almost entirely non-white supporting cast right down to the extras and as many women with speaking roles as men, but Rocha could take it easy on the T&A.


Good for Newbies? Eh, you can work it out but you’d have to really want to.
Good for Oldbies? I guess.

Superman #1 (Peter J. Tomasi, Patrick Gleason, Mick Gray, John Kalisz, and Rob Leigh)
I’m still waiting for the action to get going on the Superman books, but I liked this quiet, moody tale of the Kents attempting to settle into a new life on an isolated farm better than the exposition-heavy Superbooks that we’ve seen in Rebirth so far. That is, until a moment of graphic, gory tragedy involving an animal that almost made me close the book without finishing it. Moody is fine, but save the pet carcasses for a different character, please. Also, for the love of Rao, give Lois something to do.
Good for Newbies? Sure.
Good for Oldbies? Why not?

White Wally West, back in the timeline after the events of Rebirth, shows up at Titans Tower in hopes of getting his former teammates to remember him. It’s a boilerplate “heroes pointlessly fighting other heroes” brouhaha, dragged down further by awkward art (there is some appalling brokeback on Donna in some panels) and comically bad costumes (looking at you, Harper). I have a lot of love in my heart for the original Titans, but this is just wallowing.
Good for Newbies? Not on your life.
Good for Oldbies? Eh.

Uh-oh. Fatigue has set in and it’s only Week Three – some of the Rebirth books won’t start until October. Honestly, this is where I’m feeling the effects of double shipping. Even with Green Arrow, by far my favorite of the Rebirth titles, my reaction to a new book after two weeks wasn’t “Oh boy!” but “What, already?” In other cases, we’re seeing the art baton being handed off to weaker teams, since two books a month just isn’t possible without sacrificing quality. It’s an unsustainable publishing strategy and the sooner DC drops it, the better. Between that and the grand total of one female creator credited on these five comics, my enthusiasm is flagging for sure.