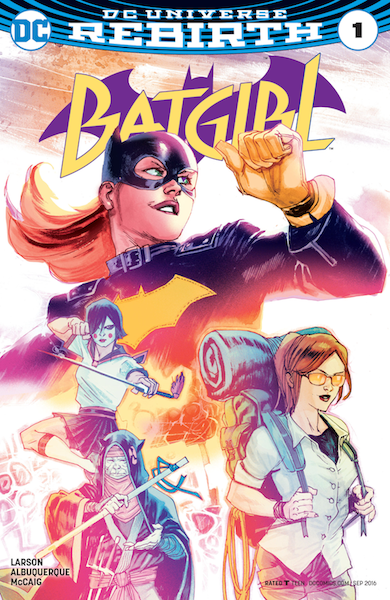 Happy August, folks! How’s Rebirth treating you? With the flood of new titles slowing down, I’m switching my coverage of every Rebirth special and #1 issue from weekly to monthly. Here’s my take on July:

This team had a tough act to follow after the beloved Batgirl of Burnside run, and it’s not clear yet if they’ve managed to nail it. Batgirl #1 is fast-paced and spunky with gorgeous colors, but basically fluff: there’s no emotional hook, shocking plot twist, or even much humor to draw readers in. This one might take a couple more issues to warm up, but so far I’m willing to let it try.


Good for Newbies? Sure.
Good for Oldbies? No reason why not!

This book is exposition heavy but in this case I think that’s a good thing; it was unclear what the status of the relationships between Babs, Dinah, and Helena is in this new patchwork universe, and this lays it out clearly. Two things I don’t get: why Dinah thinks she has a secret identity when she’s the frontwoman of an infamous band and doesn’t wear a mask, and why Barbara Gordon of all people would try to solve a mystery using a serial killer wall of notes on paper. Also, if I never have to see that one Killing Joke scene again, it’ll be too soon.
Good for Newbies? Yep.
Good for Oldbies? Too soon to tell.

This series is operating on an epic scale – universe-wide coups, weaponized planets careening around, major players wiped from existence – that gives you a few panels of lip service to catch you up, then throws you in the deep end. If you’re totally new to the Lantern mythology, the details might be confusing, but it’s not hard to tell the bad guy (the one who looks like a demon) from the good guy (the one who looks like the blandest hunk on the lacrosse team). The emotional spectrum mythology remains entirely silly and I could do without the half-naked space babe hanging all over Sinestro at the beginning, but the art is great – #1 in particular is stunningly beautiful – and the grandiose plot moves with utter confidence. If you like this kind of book, this is the kind of book you like.
Good for Newbies? Determined ones, sure.
Good for Oldbies? You bet!

John Constantine’s ditched New York and returned to his native London, fighting off a somewhat poorly-defined curse. The emotional beats at the end are all based on characters not previously mentioned in the issue, and the climactic defeat of the bad guy is skipped entirely, so there’s not much to capture a new reader’s curiosity. Also, there’s a gratuitous ass shot of Wonder Woman and most lines are inexplicably delivered out of closed mouths. So.
Good for Newbies? Not in the slightest.
Good for Oldbies? As a newbie to Constantine myself, I honestly couldn’t say.

This book ditches the nostalgia of the rest of Rebirth for something entirely fresh: Kenan Kong, a teenage bully who stumbles into an opportunity to gain Superman’s powers. Though deliberately obnoxious, Kenan’s a charming and engaging protagonist (he reminds me a lot of early Kon-El, which is a huge plus in my book), and the Shanghai setting is a refreshing change from DC’s usual US-centric fare. I love the colors but the art’s very traditional house style; I would have loved to see something that marries better with the script.
Good for Newbies? Yes!
Good for Oldbies? Also yes!

Nightwing: Rebirth focuses on wrapping up threads from Dick’s previous star turn in Grayson, while #1 gets the ball rolling on the new story. Seeley’s still writing a charming Dick whose relationships with other characters are by turns hilarious and heartbreaking, and the art in both books is great. A total win all around.
Good for Newbies? As long as you’ve read Grayson, yep – if not, skip straight to #1.
Good for Oldbies? Definitely.

This is basically just Jason narrating his origin through a series of flashbacks, drawn in pure DC house style, with a clunky page of exposition between him and Bruce to set up the ongoing plot. There is not a single woman in the entire comic.
Good for Newbies? Considering it’s 100% exposition, yeah.
Good for Oldbies? Eh.

This book spends the first five pages of its 20 page run recapping the events of Titans: Rebirth, which came out two weeks before it. The remaining pages are equally poky, with some questionable anatomy and many truly embarrassing costumes (looking at you, Harper). Titans completionists only.
Good for Newbies? Nope.
Good for Oldbies? Only the most dedicated.

As we move into the second month of Rebirth and a second tier of characters, diversity on the page gets marginally better, with eight female leads to 14 male ones (counting characters who appear over multiple books, like Babs and Dick, twice). That said, white men tend to dominate the story on the team books, and it’s a sad commentary on the industry that “better” means “still almost twice as many men as women.” There are only five POC leads and one LGBTQ one (Constantine), only the second in Rebirth so far. And diversity behind the scenes remains abysmal, with only six credited female creators to 38 men; four of those women are on “girl” books. (I like women writing and drawing women. They are also capable of writing and drawing, say, Green Lantern.)

Looking ahead I see more diverse characters coming up in August, but it’s also a sad commentary that those characters don’t get a chance to shine until three months in, when the hubbub has died down. There are some great books coming out of Rebirth, but DC’s institutional problems don’t seem to have changed one bit. Who, again, is this a Rebirth for?