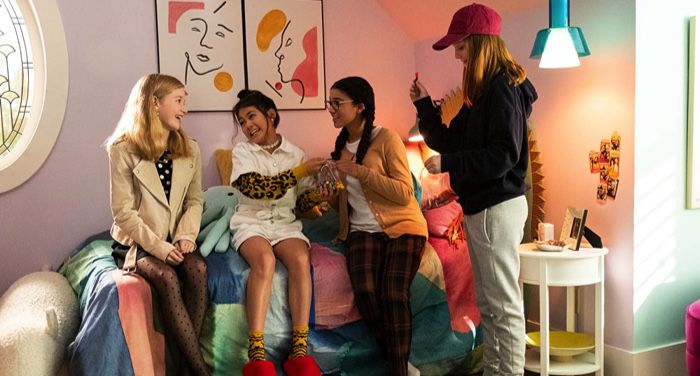 With the renewed hype around Ann M. Martin’s The Baby-Sitters Club, I decided it was high time I read it—at least, some of it. After all, I’m in my late 20s and, up until very recently, I was a children’s librarian (I now am in adult library services). It didn’t take a whole lot of imagination to figure out what the series was about, but I had no idea about the specifics. If pressed, I could maybe name a couple of the main characters, but my knowledge of the beloved series pretty much began and ended with the title. When Netflix brought the girls’ stories to the screen and with the pandemic (and other seemingly apocalyptic events) raging on in the background of my life, it felt like the perfect time to pick up Kristy’s Great Idea.

I was tempted to give the graphic novels a shot first. Like any middle grade graphic novel reader, I’m a big fan of Raina Telgemeier’s work. But I knew to do this “right,” I had to start with the original. So I put a hold on the first book in the series at the library where I work and brought it home a few days later.

And then I let it sit on my dining table for a few weeks. Oops.

Although I knew nothing about the series and had few expectations, I still had the vague idea that the book was probably bland, that the characters were boring, and that the plot would be straightforward and simplistic. Once I actually got to reading and saw how wrong I was, I started to think about why I had these expectations. Interestingly, I’d had a similar experience reading Judy Blume for the first time (also within the last few years—I know, I know. I was a little busy with Warrior Cats when I was about that age).

When I was a teen, the popular books of the day starring girl leads were books like Twilight. With the popularity of these novels (and anything teenage girls enjoy) came high criticism, the loudest of which, in my experience, had to do with the idea of the Mary Sue. While I don’t believe Mary Sues are inherently bad (there’s absolutely value in characters who allow reader-insertion), I went into both my first interaction with Blume’s work and The Baby-Sitters Club with apprehension. Young adult fiction is a relatively new phenomenon. Somehow, I’d gotten it into my brain that the relative newness of young adult fiction was the reason for some of the less developed characters I read about in my teens. Therefore, any young adult (or, in the case of The Baby-Sitters Club, adolescent) fiction published prior to that era had to have even flatter characters. The more I think it through post-reading, the less sense it makes, but that was the logic on which my subconscious was working when I let Kristy’s Great Idea languish on my dining table.

Similarly, though I might have denied it, I had expectations that the plot would be fairly simplistic. While I hadn’t quite put together a full storyline in my head before starting the book, I’m certain I never imagined the more complex side plots of Stacey’s secret or Kristy’s apprehension around her mother’s boyfriend.

I’ve noticed a tendency both as a participant and a caretaker (as a librarian) of the bookish community for older readers to turn their noses up at children’s literature regardless of when it was published (with the exception of folks bathing in nostalgia over a handful of titles that are typically deemed children’s classics). Generally speaking, we often have disdain for what is created primarily for younger audiences. It’s as if we feel we must prove we have developed beyond childhood and the enjoyments of childhood and therefore, even if a piece of media has layers that genuinely allows older consumers to enjoy it, we deny we like the thing or make assumptions about the thing to avoid consuming it in the first place.

Humans are so fragile when it comes to vanity. I don’t think I’m alone in turning my nose at BSC or any other number of examples of literature intended for children because of some deep-rooted need to prove that I’m capable of consuming more “difficult” books. It’s ludicrous and perhaps not always true, but true enough that there’s an automatic aversion in much of the adult readers in the book community to children’s (and teen) books. This attitude hurts not only the authors of those stories but us as readers in denying ourselves great stories. We assume we won’t be interested in picture books, but if you’ve ever taken a moment to flip through one of Jerry Pinkney’s books, you know that readers who refuse to touch books purportedly just for readers no older than 10 are dearly missing out on the intricate storytelling and stunning illustrations.

Oh, how wrong I was about my assumptions around BSC. And I was glad to be. As it turned out, Kristy was something else. She was a joy to read about, even if by the end of the book I was very glad not to be her friend. Claudia, Stacey, and Mary Ann were equally enjoyable characters with distinct personalities. I was even especially delighted to find that Claudia’s character was the direct opposite of the usual Asian stereotypes as she struggled with schoolwork.

The plots are also more complex than I anticipated. Kristy’s challenges in how her family is evolving are nuanced. Stacey’s secret—which is addressed in greater detail in later books—is a legitimate mystery for readers who aren’t making a serious effort to figure out what’s going on before it’s revealed. Claudia and her sister pose an interesting—but still realistic—sibling dichotomy. And Mary Ann’s difficult relationship with her father is also steeped in truth while portraying a distinct rapport.

Readers are treated to mini-plots, too, in the form of descriptions of babysitting escapades. While these sometimes are told in a more direct manner, the babysitters of the Baby-Sitters Club commit to recording their experiences in a shared journal (a brilliant idea, really). This is a fun way to get to know the girls’ approaches to babysitting and the different moments of excitement they encounter.

One adventure stood out in particular to me, and it was a delight to find this nugget reading as a twentysomething. As it turns out, a brief—but critical—appearance by one character really made this a book of my own. (If you haven’t already, take a peek at my byline.) Little did I know when I started reading about Kristy and her friends that I would be surprised by a character who shared my last name! Miss Hargreaves receives Kristy at Mrs. McKeever’s home when Kristy is hired for what she believes is a babysitting job. I won’t spoil it, but at this point, Kristy is (as characters in novels often are) in for more than she bargained for. Hargreaves isn’t exactly a name that’s unheard of. In fact, there’s a book by Frank Baker called Miss Hargreaves that a relative gifted to me. But it’s not exactly Smith or Jones, either. It’s perhaps a little silly, but anyone who has found any part of their name in a book can probably understand how this felt like an extra gift worth waiting for.

I haven’t yet decided if I’ll read more of the series before I pull up the show on Netflix. Newsweek helpfully noted which books the show is based on and there are few enough that I could conceivably knock them out over a couple of weekends. It’s conceivable, even, that I could watch the first episode, based on Kristy’s Great Idea, then read the next book in the series which happens to be episode 2 for the show, and so on. While I enjoyed Kristy’s Great Idea, however, I’m not sure I’m that committed.

Still, next time I face hesitation at picking up a book or another piece of media supposedly meant only for children, I hope I’ll remember my experience with BSC and reconsider that attitude. I hope we all will.

Whatever I end up doing, it’s a pleasure to have entered another reading community. Being a part of something bigger than myself is one of my favorite things, and I can hardly imagine a more enthusiastic group than fans of The Baby-Sitters Club.