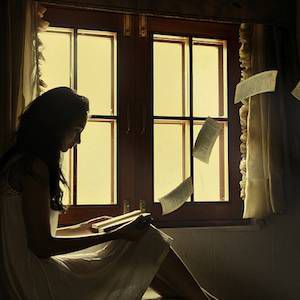 I loved rules as a kid, and it was not a gentle, sweet love: it was a self-righteous, self-serving, and entirely smug adoration for knowing that I was doing the right thing all the time and, because that was so, that I would never cause myself undue stress or accidental harm. Simply put, I believed that anything bad that happened to me would be someone else’s fault, and never my own. I know, I know. It was an imperfect theory, but it was one I clung to like a brier to a shirtsleeve when my anxiety hit or my friends backstabbed me, or whatever other angst came my way that week.

Music ultimately saved me from myself, and books gave me a place to go that wasn’t my own weird life. My favorite fictional place was Sweet Valley because everything always turned out great there. The rebellion was gentle, you could handle Lila Fowler’s bitchiness, and if you liked purple and unicorns, you felt like you had friends; even if they were kind of bitches, they were the kind of bitches you wanted to be.

Other lives fascinate me, which is probably why I’ve always been a reader and what eventually made me a writer. There’s a poem I love, called (appropriately) “The Other Life,” from a collection of the same name by poet Andrea Hollander, that discusses this idea much more beautifully than I can:

These are the days you linger
at the dinner table eating
nothing, the other life

Today In Books Newsletter
Sign up to Today In Books to receive daily news and miscellany from the world of books.
Thank you for signing up! Keep an eye on your inbox.
By signing up you agree to our terms of use
to want it,
to keep it known,

an initialed handkerchief
without an owner.

Keira Knightley has somewhat famously said that, because she didn’t go to college, she felt the need to read everything she could get her hands on to prove she wasn’t ignorant, and Zosia Mamet of “Girls,” writing for Glamour magazine, recently said something similar.

Because I loved rules so much, I read for similar reasons once I got it into my head I was going to be the first girl in my immediate family to go to college (my brother had been the first kid, period). I worried a lot about college, but fortunately there was a whole batch of rules to follow on the path to getting in: I practiced for my placement exams, went to state FBLA and Beta Club competitions, was on yearbook staff, managed the baseball team.

I worried that if (not when) I got into college, everyone would know, somehow, that I was a yokel. I started working on hiding my drawl. I read obsessively from a long list of books I thought I should read and used the internet, which we got when I was around 14, to find out what I should think about those books.

While I was doing all the things I thought I should do, I rebelled against my peers a little bit, too. I wrote for non-school reasons, making poetry My Thing. I defensively developed a reputation as a weirdo, which I thought would translate better to college than being the simple granddaughter of farmers and veterans.

Things people called me in high school: devil worshiper, witch, lesbian, slut. All of which were met with a giant WHATEVER WHO CARES WHAT YOU THINK ANYWAY. And derisive laughter when they tried to use “lesbian” as an insult.

Thing no one called me in college: yokel.

I know that’s not because of my desperate desire to escape, and unfairly, to hide where I came from. None of my peers in college gave a shit what I had or hadn’t read, and my professors didn’t judge me for dropping my G’s and saying “carmel” instead of “care-a-mel” and “surrup” instead of “seer-up” (both of which I deemed, for some reason, incorrect instead of just regional). NO ONE CARED. And if they did, they were kind of assholes about other things too. I learned that really early in my college experience.

Alas, that wasn’t soon enough, it wasn’t whilst I dreamed of running away, of liberal arts college, of women’s college, of the East Coast and the Pacific Northwest.

No matter how much time I spent in books, leaving my weird and boring little life behind me for a while, I never quite found the nerve to leave for real. I was too afraid, too mired in what I was afraid others would think. The WHATEVER WHO CARES only applied to my high-school peers; I cared way too much what everyone else in the entire universe thought, never imagining I could possibly be wrong about them. Judging them lest they judge me first.

How unfair, what snobbery. I’ve been working to remedy those old ways; I write about the process in some form every time I sit down to write about books, it seems.

I didn’t accept the invitation to attend the college of my dreams because I was too scared I wouldn’t fit in with all the (surely) more sophisticated, better-read students I was certain to encounter, never taking into account that many of them would in fact come from the same state I did, and that they were much likelier to come from similar areas since that’s pretty much what my state is: a few small cities and a few medium-sized towns, and a lot of farmland. A lot of first-generation college students. A lot of them braver than I was.

I don’t believe in Big Life Regrets, so that’s not what inspires this looking back. Instead, I usually view life as a series of, really, other lives. Maybe that’s why I liked Kate Atkinson’s Life After Life so much. Instead of being reborn constantly, though, I see my other lives branching almost like a family tree: I chose this, I didn’t choose that; this is my life; what would that one have been like? Instead of regretting a sacrificed choice, I try to follow it through to where it would have led me. Sometimes this thought process turns into a short story; other times, it’s a wistful evening of homesickness for a life I didn’t get to experience. Still others, it’s a rambling Book Riot post. Always, it’s much more interesting (for me, anyway) than mere regret.

Where would I be if I’d encouraged that guy break up with his fiancee fifteen years ago? Where would I be if I’d gone to my dream college? I’d be wondering about this life, this weird, quiet little life I pretty much adore and am overjoyed to return to when I close my book for the evening to inhabit and build it, and make up the rules as I go along.