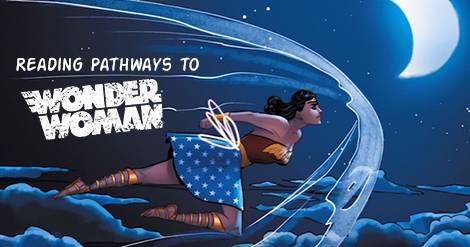 With her first blockbuster movie about to be released, interest in Wonder Woman’s comics have reached Olympian heights. But, what should you read? With more than 75 years of stories, figuring out where to start is daunting. Well, have no fear—Book Riot is here with some some reading pathways to get you started reading Wonder Woman.

The Legend of Wonder Woman by Renae De Liz and Ray Dillon. 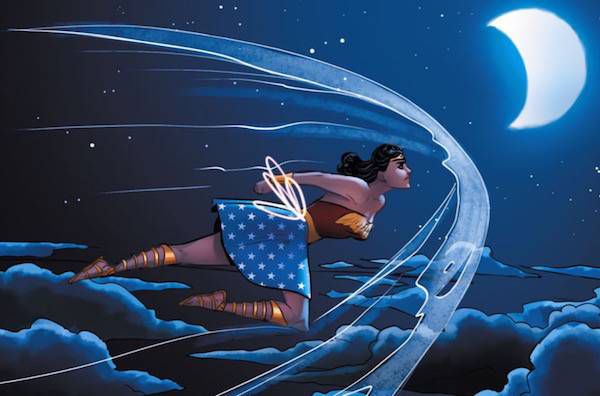 If you’ve never read a Wonder Woman comic before, then there is no better starting place than The Legend of Wonder Woman by Renae De Liz and Ray Dillon. Set during World War II, the series is a back-to-basics retelling of her origin and her early adventures in “man’s world.” But what makes it truly stand out is the stellar supporting cast, especially De Liz’s take on Diana’s pal Etta Candy, who I dare you not to fall in love with. If that wasn’t enough, De Liz and Dillon’s art is genuinely stunning, making it a beautiful read in more ways than one. 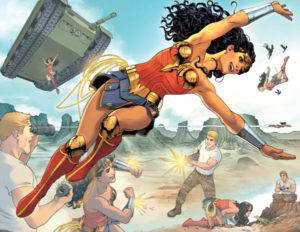 There was much cheering in comicdom when DC announced last year that Greg Rucka would once again be writing Wonder Woman as part of DC’s Rebirth relaunch. Rucka wrote a critically-acclaimed run on the series over a decade ago, but it had ended unsatisfactorily in the lead-up to Infinite Crisis and an even-less-satisfying relaunch (more about that below).

Rucka’s Wonder Woman is unique among DC’s Rebirth books in that it has been telling two alternating stories—one set in the present (art by Liam Sharp) and one in the past (art by Nicola Scott and Bilquis Evely)—that have slowly come together into a single broader narrative. As the current “official” comics, Rucka’s series is another fantastic starting place. But, I strongly recommend starting with Volume 2 (“Year One”), which retells Diana’s origin, and then going back to either Volume 1 (“The Lies”) or, better yet, Rucka’s first run, which is closely connected to this story. Plus, Nicola Scott’s are in “Year One” is amazing, offering a rare glimpse at a Wonder Woman who is really enjoying herself. (How often do you get to see Diana stick her tongue out at a lizard?) 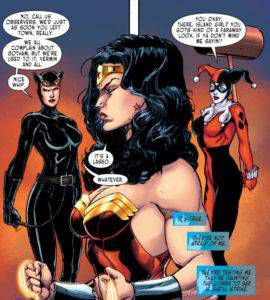 Some of the best writing in recent years came not in her self-titled series, but in the digital-first Sensation Comics anthology series, where a diverse group of creative teams got to explore Diana and the world around her through single-issue stories. The stories are out-of-continuity, so some break more than the mold than others, but it’s a great introduction to the character and the types of stories that can be told about her. Plus, many of the stories are written and/or illustrated by women, which is sadly still all-too-rare with Wonder Woman comics. It’s a truly fun series, and I definitely recommend picking it up, even if you start somewhere else first.

For a character who has been around for 75 years, Wonder Woman has had relatively few truly excellent runs. If there is a single definitive, character-defining run, it is almost certainly George Perez’s post-Crisis on Infinite Earths relaunch. The first volume retells Diana’s origin in a 1980s Cold War setting that feels all-too-real to anyone who remembers living through it, before reintroducing classic villains like Cheetah. Where the run shines, though, is in its characterization of Diana and the people and gods around her. It’s an excellent run, though the storytelling conventions can feel a bit dated, and it could definitely have benefitted from some female voices in its creation. If you can put up with 1980s comic storytelling and men writing about women, then Perez’s run is a fantastic starting point. 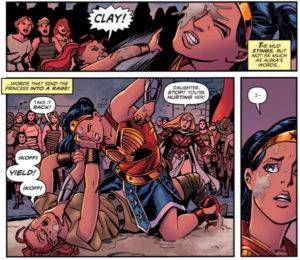 The New 52 reboot was designed to be accessible and breathe new life into Diana and her world, and Brian Azzarello and Chris Chiang largely succeed. Their action-packed 35 issue run gets going fast, and rarely slows down. But, at the same time, we get some truly innovative takes on the Greek gods, with the Azzarello/Chiang take on Ares a particular stand-0ut. The run suffers, however, from some truly questionable retcons around Diana’s origin and the natures of Themysciran society, as well as a line-wide romantic pairing of Wonder Woman with Superman that results in many of her traditional supporting cast (notably Steve Trevor) being MIA.

Wonder Woman: A Celebration of 75 Years by Various. 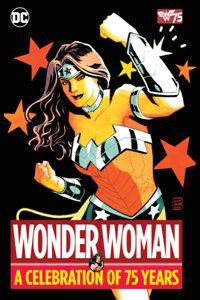 “Wow,” you’re saying. “All of those sound good, but I can’t decide!” Well, then, look no further than last year’s Wonder Woman: A Celebration of 75 Years, which collects some of the best stories from across her history. There’s everything from her earliest adventures in the Golden Age to the New 52 and Sensation Comics. Reading through can give you a feel for how Wonder Woman has been portrayed over the years, and where you might want to take a deeper dive.

Where not to start:

While I’m generally a proponent of the “find a random trade and start reading it” method of discovering a character, there are a few places I would advise against starting. 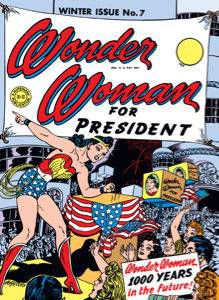 Don’t get me wrong, there are some incredibly fun Wonder Woman stories from the Golden Age—Wonder Woman #7, where she runs for president in the year 3000 is particularly fun—but it’s not a great place to start reading Diana’s adventures, unless you already know you love Golden Age comics (and, if that’s the case, you’ve probably already read a bit of Wonder Woman). I would instead suggest reading the Golden Age stories in the Celebration of 75 Years collection and then circling back after you’ve explored elsewhere. When you’re ready, there’s a great Wonder Woman Golden Age Omnibus to get you going.

Who Is Wonder Woman? by Allan Heinberg, Terry Dodson, and Rachel Dodson.

It’s not so much that this trade is bad (but, yeah, its not great); it’s just a horrifically bad way to start reading Wonder Woman. The status quo is really confusing (it starts after Infinite Crisis with Wonder Woman in semi-retirement) and it requires familiarity with a deep bench of supporting cast and villains. Unfortunately, since it’s just been reprinted (presumably because Heinberg helped write the movie’s screenplay), it’s one of the books you’ll have the easiest time finding. Heinberg and the Dodsons have done some stellar work elsewhere, but stay away from this volume.

Wonder Woman: Earth One by Grant Morrison and Yanick Paquette. 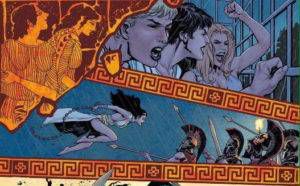 Morrison and Paquette’s Wonder Woman: Earth One is another in the “easy to find, but terrible introduction” category. The graphic novel retells Diana’s origin in a way that readers have found either enlightening or infuriating (or, perhaps a bit of both), but it is best appreciated if you are already familiar with the character in order to see how Morrison is breaking from what came before. I am not personally a fan of the book, though Paquette’s art is genuinely beautiful with some truly creative panel designs. 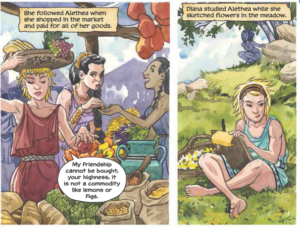 I loved loved loved Wonder Woman: The True Amazon. It is Thompson at her absolute A-game, with a truly fresh take on Diana’s origin told through vibrant watercolors. (It’s also one of the most overtly queer takes on Diana.) You should absolutely buy it and read it… eventually. But, as with Earth One, it is best appreciated if you already have some familiarity with Wonder Woman so you can see how Thompson is working against expectations. But, it’s so good that you should probably just go ahead and order it now to be safe.