Mystery writers come from many backgrounds, but Sri Lankan–born Australian writer Sulari Gentill has one of the best. She studied astrophysics in college, pivoted to law, and eventually realized her dream of writing books. She also hunts truffles with her dog. If that’s not enough, her writing is incredibly versatile. She started writing a fantasy series known as the Hero Trilogy, and then her husband recommended that she try her hand at murder mysteries. She found it a natural way to write; people had a reason to go into a room together…to solve (or obscure) the murder.

In a conversation earlier this year, Gentill told me about the opportunities for both the reader and the author. She said, “the reader is engaged in that whole process of discovering and uncovering who made the dead body. In the excitement of that, you can actually have a conversation with them about other things as well. I quite love that about my fiction because crime fiction isn’t just about the murder, it’s often about something else as well.” Her books explore a multitude of issues ranging from mental health to the rise of fascism.

When asked about the importance of crime fiction, Gentill said, “Crime writers are tackling bigger questions about society’s influence and society’s responsibility for crime and for murder in particular. I think that is a really important and useful discussion. I think it’s a way that the genre can really contribute to the understanding of the world.” 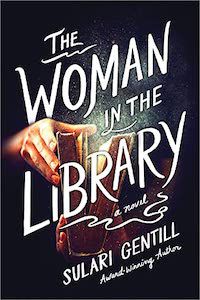 The Woman in the Library

This book is her most recently published one. It’s two stories in one. In one story, a visiting Australian writer meets three strangers at the Boston Public Library when the silence is interrupted by a woman screaming. The four become close friends quickly. But the scream that drew them together? The woman is found murdered. The writer fears that one of her new friends might be responsible. The second story is about the writing of the story. There’s a series of letters from a writing partner to the author of the library story commenting on it and giving suggestions how to improve. It’s a thrilling narrative that gave me goosebumps. 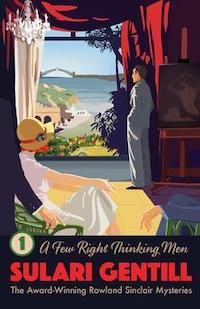 This is Gentill’s Golden Age Detective Series featuring Rowland Sinclair. Set in the 1930s, he’s the younger brother in a wealthy landed family in Australia but has chosen a Bohemian life. He’s an artist living with his fellow artist friends in the family’s mansion in Sydney. His older brother and head of the family strongly disapproves of Rowland’s choices and the company he keeps. But Rowland manages to live his life…that is, until his favorite uncle is brutally murdered. That sets Rowland into the world of politics as competing factions of fascism and communism clash. It’s the first in ten books (so far)! In addition to being delightful mysteries, these books give me a sense of the historical forces in Australia in the 1930s. 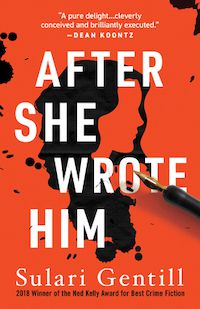 After She Wrote Him

This is Gentill’s other standalone book, a postmodern mystery novel. Madeleine d’Leon, the main character, is best known for her mystery novels featuring an amateur sleuth who works as a maid, but she’s got inspiration for a new character, Edward “Ned” McGinnity, a literary novelist. He’s thrilled to have written a new character for his book called Madeleine d’Leon. It feels like an Escher print in word form. The stories are interwoven and brilliantly combined. It’s a novel unlike any other I have found!

Want more postmodern mysteries? Check out this list I wrote in 2020. For folks who want to read more about Australia, check this Rioter’s list of books set there!