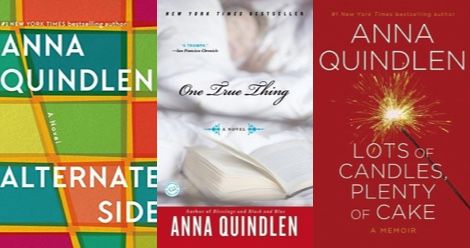 Anna Quindlen is one of my go-to authors. I’ve followed her career for over 20 years, and anything she publishes goes automatically to my must-read list. Her fiction has always centered around women’s lives and the defining moments in which they find themselves. Whether it is a coming-of-age story about a girl in a small farming community (Miller’s Valley), a middle-aged woman escaping an abusive marriage (Black and Blue), or an older woman creating a new life after retirement (Still Life with Bread Crumbs), Quindlen is at her best when she is sharing the varied experiences of everyday women.

Anna Quindlen did not start out as a novelist. She worked for over 20 years as a reporter, editor, and columnist from 1974 to 1995, winning the Pulitzer Prize for Commentary in 1992 for her columns in the New York Times. She left journalism to write novels in 1995 but returned a few years later to write her biweekly “Last Word” column in Newsweek while she continued to write fiction.

In her reporting Quindlen charged headlong into political and social issues—school shootings, capital punishment, mental health, homelessness, and child welfare. As a columnist, she often wrote about motherhood and shared poignant lessons from her own life. It is clear that her history in journalism informs the fiction she writes. She has a penchant for making astute observations on human nature, digging deeper to unearth universal emotional realities that ring true. Quindlen creates messy, vivid characters and places them in relatable situations that feel breathtakingly real. 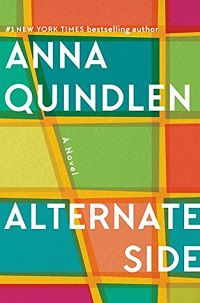 Her recent release, Alternate Side, is Quindlen’s ninth novel. Nora Nolan lives with her husband in an affluent, tight-knit neighborhood in New York City. When an ugly incident disrupts their cozy community, the relationships that once appeared so solid begin to show the hidden fractures beneath the surface. It is a quiet book with a slow build that examines the complexity of familial relationships and the concept of privilege. Definitely one to put on hold at the library!

If you want to check out Anna Quindlen’s previous books, I suggest the following three books to give you a taste of all she has to offer. 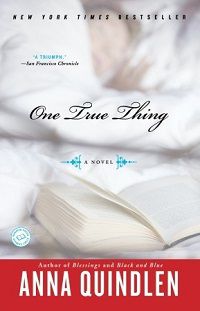 START WITH ONE TRUE THING

This early novel was the gateway drug into my Quindlen obsession. This family drama follows Ellen Gulden, a young woman who puts her journalism career in New York on hold to come home and care for her mother, Kate, who is dying of cancer. When Kate dies, Ellen is accused of a mercy killing, and an investigation is launched. Quindlen was only 19 when she lost her own mother to cancer. She demonstrates an intimate knowledge of grief and explores the sometimes complicated bonds between parent and child in nuanced, compassionate ways. There was a great movie based on the book, for which Meryl Streep won an Oscar in 1999. If you’ve seen that, I’m afraid the ending is ruined for you. But if you are new to Quindlen’s work, this is a great book to start with. 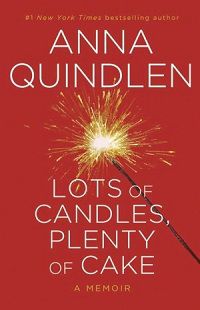 THEN, TRY HER MEMOIR LOTS OF CANDLES, PLENTY OF CAKE

This memoir, published in 2012, is a perfect introduction to Quindlen’s nonfiction. She tells about her childhood, of helping to raise her four younger siblings after the death of her mother, and being one of the first female reporters for the New York Times in the 1970s. She speaks in broader terms about the realities of motherhood, getting older, and the evolution that marriage and friendship undergo in our later years. Quindlen is a baby boomer who came of age along with the the women’s movement during the 1960s and ’70s, so the book also serves as a commentary on feminism over the years. She reflects on the victories won and what those changes have meant for women over the intervening decades. The author narrates the audiobook, so it is a great choice for listening. 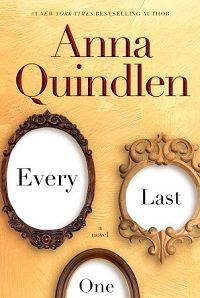 FINALLY, READ EVERY LAST ONE

This is, hands down, my absolute favorite book by Anna Quindlen, and it perfectly illustrates why readers find her stories so compelling. In her exquisite and insightful prose, she conveys the sheer magnitude of the decisions faced every day in parenthood, making even the most ordinary moments burn with significance. Mary Beth Latham is a dedicated wife and devoted mother to three teenage children. When a shocking event upends the life she has so carefully created, she must walk into a new life that will be forever divided into before and after. It really is best to go into this book knowing as little as possible. It wanders into some emotionally challenging territory, but is well worth the journey.

If you are interested in more nonfiction, Quindlen’s Newsweek columns are collected in the book Loud and Clear and create a fascinating look at the state of our country as we headed into the 21st century. Her columns on 9/11 and the Bush/Gore election of 2000 will have you feeling like you stepped into a time machine. And her commentary on the NRA, sexual assault, and racism, remind us that we are still fighting many of the same battles 15 years later.

She has also written several smaller books (50–100 pages) that make wonderful gifts for reading friends. How Reading Changed My Life, Being Perfect, and A Short Guide to a Happy Life are all inspiring and delightful.