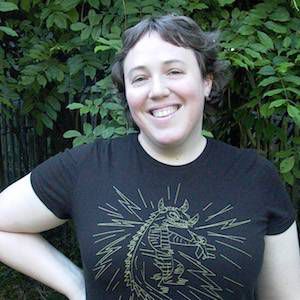 I have a reputation around my bookstore for being especially fanatic about a single author. If I see a customer flipping through one of her books, I attempt to keep it cool:

But once they’ve walked out, book in hand, I’m more like:

And god help those I’ve recommended her to if they return to tell me how much they enjoyed her work:

Just kidding. I don’t hug customers; that would be inappropriate. But I do give them an extensive list of other books and authors they may enjoy, which is kind of like hug, if books could hug.

Who is this author, who inspires hugs and fanaticism? Her name is Kelly Link and she is a sorceress of the weird, the fantastic, the domestic fabulist tale.

If you’re a fan of the weird and strange, the melding of genres and the meddling with reality; if you cite Karen Russell, George Saunders, Aimee Bender, Donald Barthelme as a favorite writer; if you love fairy tales, sci-fi, and fantasy whipped into your reality and baked into an unrecognizable, totally fresh dish: read on. There is a Kelly Link story for everyone; I’ve highlighted a few favorites and categorized by genre appeal. Bonus: most of them are available for free online.

For Fairy Tale Fans
“Travels with the Snow Queen”

Sometimes it is safer to read maps with your feet.

This story is a personal favorite, so beloved that a line from it is permanently inked on my ankle. The story follows a young woman named Gerda who is following a trail of glass left by her boyfriend Kay who may or may not have willingly left her for the Snow Queen. In her quest for love—or at least closure—Gerda meets many a talking animal, a robber queen with excellent taste in shoes, and a princess who spends most of her days asleep. The story is told in second person, which may strike you as a turn off but I promise it is brilliantly done. Link turns the fairy tale trope upside down and shakes all the best bits from its pockets. This story is funny and feminist and guys it’s so good I got part of it tattooed on my body; is that not enough motivation to read it?

For TV Fanatics
“Magic for Beginners”

This is really two stories—which could be said about many of Link’s stories, actually. There’s the story about Jeremy, whose dad is a horror novelist and whose mom recently inherited a Las Vegas wedding chapel, and there’s the story about Fox, a character on a sci-fi/fantasy TV show set entirely inside a library—The Free People’s World-Tree Library—which has no set schedule and a cult following. Well, technically Fox and Jeremy are both in a TV show and they’re both called The Library. It’s a complex look at fandom, teen angst, and parenting all rolled into an excellent road trip tale.

For Zombie Enthusiasts
“The Hortlak”

She looked like someone had just set her favorite city on fire.

Batu and Eric work at the All-Night Convenience. Batu and Eric basically live there too. Batu has a scheme to change the face of retail. Their customers consist mostly of joggers, truckers, Canadians, and zombies. The zombies are the hardest customers to please; they usually attempt to buy something they themselves brought into the store—shiny things, broken things. Is this story a metaphor for unfulfilled expectations and existential dread? Or is it a simple tale of retail, unrequited love, and zombies? You be the judge.

He said that he knew what it was to hear a ghost walk, but he’d never heard one crawl before.

There were two spaceships, sister ships—House of Mystery and House of Secrets—but the former disappeared years ago. House of Secrets sails on, uncertain as to the fate of their sister crew. They pass the time by telling ghost stories in a spaceship able to recreate the environments described. They pass the time trying not to think of the ghost story they are currently living. “Two Houses” manages to be both gothic and futuristic, somber and playful; and it was originally written for a Bradybury-inspired anthology.

Catherine dreams about colors. It turns out her marriage was the same color she had just painted the foyer. Velveteen Fade.

This was my first Kelly Link story—it only takes one to fall for her utterly bizarre and entirely unique style. It’s about a husband and wife who move upstate with their two kids. It’s not about a haunted house, but about haunted objects that populate the house. It’s about a marriage coming apart—the pain of it manifesting in their possessions, their, dreams, and their children.

I could go on—and on and on and on; some of my favorite stories didn’t make the list. I love them for their small details, their pop culture references, their lists, and their ability to express a familiar emotion in an utterly unfamiliar way. Every Kelly Link story is a unique experience; hope you enjoy them as much as I do.