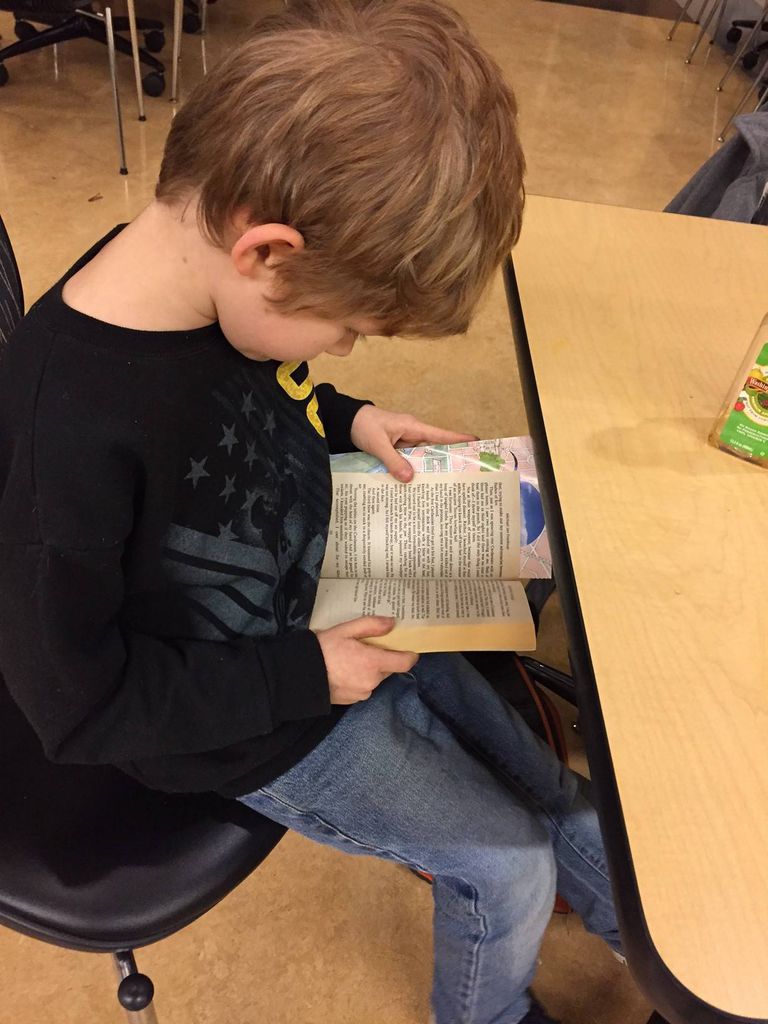 It’s a funny thing about parenting, sometimes the biggest milestones come out of nowhere. And that’s what I’m here to burst about, because it happened last week. It happened casually, and the impact of it didn’t hit me until later.

My oldest son, Zach, is eight and he has very specific interests. Science, mainly. His interest in fiction waned as he approached eight, as his interests in science increased and he came more fully into the realization that he preferred nonfiction over fiction. I didn’t mind. I don’t care what he’s reading, so long as he’s reading; reading for pleasure, and getting something out of it. Anyway, I read all over the place, so I was still able to talk to him about it.

Then, this summer, a new interest arose: Star Trek. Star Trek had not only the science but what I’ve realized he likes in people as well: Competent people working with other competent people to solve problems intelligently. He took to Star Trek with gigantic enthusiasm, and I was giddy. It’s practically a religion for me. There is nothing more fun than wandering through a beloved TV series and showing all the best episodes to someone who has never seen them before, not to mention revisiting episodes you perhaps haven’t seen in many years.

I followed this with books, of course. Always books. I dug up and handed him my old Star Trek Encyclopedia. He got a technical manual which goes into extreme detail on the ships and technologies of Star Trek. And that’s how it was, for the summer and most of the autumn.

Last week, I was looking for more stuff to give him, to fuel his passion about something…and I remembered that I still owned a ton of Star Trek novels from my own childhood. And then I further realized that some of them, despite being adult novels, weren’t all that complicated. Bigger print, easy story, and further adventures of characters and a world he had grown very attached to.

THIS is the book I gave him. 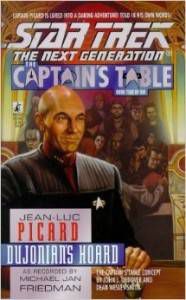 If you got the whole series and lined the covers up, they made one picture. I was obsessed with those.

He took it, seemed interested. Took it to bed that night. Propped it up on his knees, a lamp beside him…and was gone to the world.

And then it hit me. It was a Huge Milestone!

This was an adult book, you guys! He’d read all sorts of other stuff, but this was an adult novel! One could make the argument that this was the final level of reading-growth, you know? Once you’re up to the reading-adult-books stage, books like that, I feel like the world of books is wide open to you from there on. It was a milestone, not the way taking the first step would be, but the way starting to walk and run confidently is.

I was giddy, and a little bit verklempt, let’s be honest. I spent the rest of the night bouncing around about it. He’s here!

I checked the next morning, and he had read forty pages that first night. And then the second night, he had hit the hundred goddamn page mark in the book! I became so excited that I backed way off and stopped mentioning it, for fear that I would hyperactive him right out of interest in reading these books.

Everything else just added to the milestone, too. When going from a rainstorm to the car, he would tuck the book inside his jacket. He began carrying it to places where he was going to have to sit around and wait. He had a portable world, in a way that none of the other books he was reading had been, and he loved it.

And…okay, this part is pure sappy, okay? But on the second day, he asked if he could start keeping a reading journal, like I do. And now he has. A little bright green Picadilly notebook, sitting on a shelf next to my larger, increasingly battered leather thing which has seen me through the years. Look, I told you this was sappy, didn’t I?

I racked my brains to come up with a deeper point here, at the end, tying everything together…but you know what? I’ve got nothing, and I’m not sorry. I am unspeakably proud…and I am really fascinated by the milestones you don’t expect which catch you off-guard, or which you can only truly appreciate in hindsight. And I am digging through my memories and ThriftBooks, trying to recall other Star Trek books I think he’ll enjoy.

Kids and books, you guys. Like peanut butter and chocolate. They just go together. 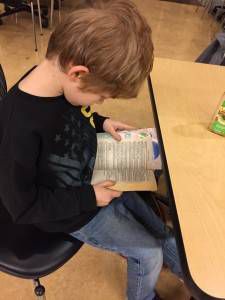