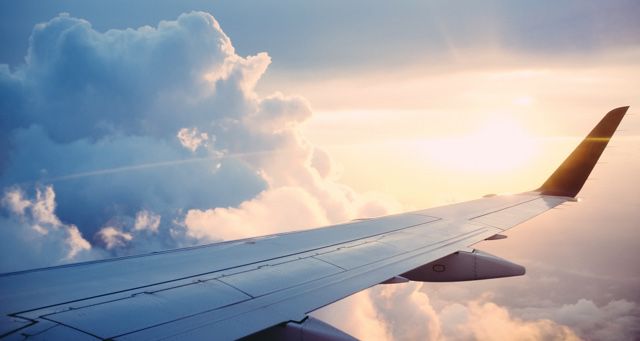 I recently took a flight across the country. Although flights can be uncomfortable, boring, even agonizing experiences in many ways (I’m thinking specifically of the restrooms), every time I fly I look forward to one simple pleasure: the subtle magic of reading on an airplane.

A flight is a type of suspended animation. Especially when flying between time zones, the passing of minutes and hours becomes more abstract between takeoff and landing. Do you check the time based on where you started, where you’re going, or where you’re over? I’ve gotten in the habit of not checking the time much at all.

Although many flights now offer WiFi and entertainment screens built into the backs of seats, I rarely can justify the extra cost of internet access and never seem to have headphones for the screen. Naturally, in this floating state of timelessness, with nothing else to occupy or distract me, I gravitate toward reading.

I always stock up at the library and spend careful time at my bookshelves before flights. For this trip, I’ve brought four books: The Name of the Wind; Spineless: The Science of Jellyfish and the Art of Growing a Backbone; Imperial Dreams; You Feel So Mortal.

Without even realizing it, I selected four books that are perfect flight companions. The Name of the Wind is a thick tome containing a fully-realized world, in which I can immerse myself for hours at a time. Spineless describes the undersea lives of jellyfish with effortless prose that makes the reader feel as weightless as the invertebrates themselves. Imperial Dreams follows one naturalist’s journey to spy a rarely seen imperial woodpecker.

The last of these books kept me occupied for more than half my trip. In You Feel So Mortal, Peggy Shinner has penned “essays on the body,” which explore everything from autopsies to cultural stereotypes associated with nose shapes. In reading it, I am unable to forget that the body is a fickle, mortal thing. I am unable to see an airplane as anything besides a capsule of pure, mortal energy—a tube of mortal bodies en route to a common, mortal destination.

One of my favorite things about visiting new cities is checking out their bookstores. For my return flight, I’ve picked up a few new novels and essay collections, but the book I’m most excited to dive into is Tillie Walden’s On a Sunbeam.

Originally published as a webcomic, Sunbeam gives the reader a new take on the space opera genre. The all female or nonbinary cast is racially diverse and exists in a universe in which men are neither seen nor mentioned. It stands in contrast to the traditionally white and male genre to which it contributes a new, exciting perspective. The compiled webcomic is long, too (over 500 pages), so its depictions of zipping through space and exploring unknown corners of existence will make the perfect companion to settle in with for a lengthy flight back across the country.

The mostly undistracted environment of a long flight is something I wish I could replicate more in my daily life. Where else am I able to read for three and a half or five hours straight? There are always emails to respond to, dishes to wash, cats to feed, errands to run, articles to write, sleep to sleep.

Perhaps it’s a mawkish sentiment, but I think reading on an airplane is magic. There is a lot about flying that sucks eggs, but for a few hours at a time it allows me to pause my life on the ground and fully immerse myself in one of that life’s greatest pleasures.