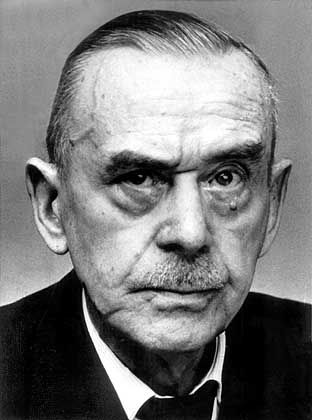 This is a guest post by Rachel Cordasco. Rachel has a Ph.D in literary studies (which means she’s read WAY TOO MANY books over the years) and has taught American literature and composition. She has also worked as an editorial assistant at the Wisconsin Historical Society Press. Keep up with her in the Facebook group for And the Moral of the Story Is…, on Twitter @Rcordas, and at bookishlywitty.blogspot.com.

[OK, there’s actually no such thing as “Thomas Mann Appreciation Day,” but there damn well should be, people. The following is the speech I’d give at an event celebrating the immortal author]:

As my friends and family know well, I am a bit obsessed with Thomas Mann. I’ve read all of his major novels (that have been translated into English- I know, don’t say it), all of his short stories, a book of his essays, and the most recent biography by Hermann Kurzke (Thomas Mann: Life as a Work of Art, A Biography; 2002). I’ve even read the tetralogy, Joseph and His Brothers, all 1,492 pages of it. And I say to The Black Swan and Lotte in Weimar: you’re next!

hear all you Comparative Lit people snorting with disdain, and I see you German Lit people raising angry eyebrows, but read on, and you might just forgive me.

Of course, it started with a crush. Not on old Tommy, poor thing, but on a high-school teacher (let’s call him Mr. P). He was my school’s book club advisor, and therefore I had to join, just to be able to gawk at him outside of school hours. The last text we read for the semester was Mann’s novella, Death in Venice. Now, when I heard we were reading Mann, I at first sighed miserably because I had read “Tonio Kruger” a couple of years before and actually thought it sucked. But for you, Mr. P.? Anything!

I read Death in Venice in a single night, and all thoughts of Mr. P. faded into the background as Thomas Mann stepped forward, my newly-anointed Favorite Author. It’s still almost impossible to explain exactly what it is that I love about his books, novellas, and stories. I could identify with his often angst-ridden artist characters, since I too have imagined myself as a kind of Artist (you know, I’m a Writer in that fantasyland of my mind. It’s a nice place). I’m forced to think deeply about the characters’ conversations in order to understand what they are really trying to communicate, and their inner lives are so nuanced and complicated, just like the rest of us mortals.

Only later did I start to think about the issue of translation. I admit that I’ve never read Mann in the original German. I’ve always meant to study German, but French, Italian, and Russian just happened to come first. And it doesn’t look like learning German will be an option in the near future (twin boys- yeah, I know!). However, I decided that getting my Mann second-hand was better than no Mann at all (here I want to give a shout-out to translator John E. Woods- thank you, man, for making it possible for me to read Thomas Mann even though I’m lazy and didn’t get my Rosetta Stone on).

Finally, we are still talking about Mann in 2013. Earlier this month, on the 58th anniversary of his death, the New Republic reprinted a statement by its editors supporting Mann’s denunciation of Nazism The writer’s novels, essays, articles, and stories continue to remain relevant, even in a new century.

So, if Dr. Who ever landed in my backyard and beckoned me into the TARDIS, I’d happily enter and demand that he take me to 1950s Switzerland so I could listen to Mann talk about…well, anything really. I’ll bet that his conversation was as mellifluous and as passionate as his texts.