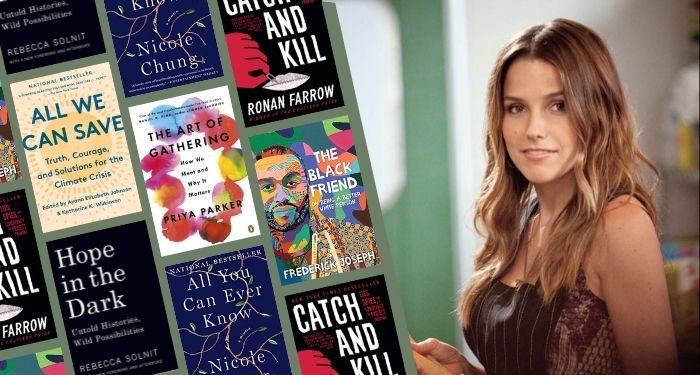 Sophia Bush’s love of books is well-documented. The actress and activist (and entrepreneur, and podcaster, and… I lose track. Suffice to say that she wears many hats) often takes to her social media channels to recommend books she has read and enjoyed, and she often interviews her favorite authors on her podcast Work in Progress.

Bush leaped to fame in 2003 thanks to her role as Brooke Davis in the teen drama One Tree Hill. Among other noteworthy roles, she’s also starred as Detective Erin Lindsay in Chicago P.D. and Dr. Sam Griffith in the recent Good Sam. Her filmography includes book adaptations: she played Veronica in the ongoing Love, Victor, the TV adaptation of Becky Albertalli’s Simon vs. the Homo Sapiens Agenda. Bush has also done voicework: she narrated several essays in the audiobook of All We Can Save: Truth, Courage and Solutions for the Climate Crisis, a compilation edited by Ayana Elizabeth Johnson and Katharine K. Wilkinson; and has narrated children’s stories for the Calm app and Save the Children’s #SaveWithStories initiative.

Given her involvement with social issues, it’s hardly surprising that many of the books she mentions or recommends deal with this. Still, Bush’s other interests can also be seen in the glimpses that she has shared of her (metaphorical) bookshelves: community, hope, and people themselves. For the most part, she shares primarily books of nonfiction. Some of her recommendations are:

Bush obviously loves a good memoir: from her friend Hilarie Burton’s The Rural Diaries, which she has called “beautiful” and a “love letter,” to cardiac surgeon Stephen Westaby’s Open Heart, which she dubbed “incredible.” In 2017, she gave Bustle five feminist book recommendations, among which she included My Life on the Road by Gloria Steinem, describing it as “an incredible recount of her adventures” that “inspires the get-up-and-go in me.” Other memoirs she has mentioned enjoying or wanting to read are All You Can Ever Know by Nichole Chung and The Promise of a Pencil by Adam Braun.

A lot of what Sophia Bush reads falls under this category, such as with the aforementioned All We Can Save, which she described as “honest, hopeful, scary, and one of the most incredible teachings available to us today.” Similarly, she praised Ronan Farrow’s Catch and Kill, deeming it “gripping. Chilling. Devastating. Suspenseful.”

She shows interest in the way that humans develop habits and relationships, as can be extrapolated from her recommending Priya Parker’s The Art of Gathering on Work in Progress, as well as Rebecca Solnit’s Hope in the Dark. Of the latter, she has said that “what always gets me about this book is that it reminds me that activism must be grounded in optimism.”

On Being a Better Human

This category intersects quite a lot with the previous ones, but it deserves its own headline. From The Black Friend by Frederick Joseph, to Jason and Danica Russell’s A Little Radical: The ABCs of Activism, her recommendations are often meant to guide readers who want to be better versions of themselves. Her praise of A Little Radical is heartfelt: “It’s technically a ‘children’s book’, but I read through it all the time. It’s the A, B, Cs of Activism. It teaches kids, and adults too, how to love on the world.”

Although she doesn’t often mention reading fiction, Bush has recommended a number of novels: in her Bustle recommendations, she included Octavia E. Butler’s Parable of the Talents, describing it as “a powerful lesson,” and Margaret Atwood’s The Handmaid’s Tale. But she reads genre fiction too: she has talked about Nova Jacobs’ The Last Equation of Isaac Severy, dubbing it”clever, engaging.”

What Are the Common Threads?

Once I put this list together, it became easy to identify patterns: Sophia Bush’s bookshelves seem to be dedicated to humanity in all its problematic splendor. Whether it’s an essay and poetry collection dedicated to the climate crisis, a medical memoir, or a sociological book about community and gathering, the books she chooses to read and recommend are those that delve, whether consciously or not, into why we act like we do, and how we can improve on that in order to make the world a little bit better.