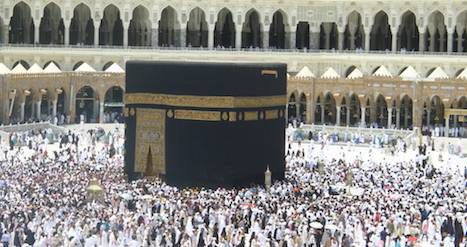 This is a guest post from Kareem Shaheen. I’m a 30 year old journalist from Egypt, living in Beirut, Lebanon, where I write about all things Middle East for the Guardian newspaper. I lived most of my life here, between Dubai, Beirut and Egypt, and have found respite in books whenever the world seemed darkened.

I spent almost the entire drive to Mecca reading a John Grisham novel (The Runaway Jury if you’re curious).

It’s not that the scenery of the drive from the Saudi capital of Riyadh to Mecca isn’t gorgeous – it’s a scene of dreamlike and desolate rocky desert, highways carved impossibly under quarried hills. The scene’s austerity heralds the spiritual journey – soon we would shed the clothes we wore and dress in simple white garb, meant to resemble the shrouds we’d be buried in, in submission to God. They say the first prayer you make when you set your eyes on the Ka’aba, the center of the Grand Mosque, that prayer will be answered.

And I couldn’t put down John Grisham.

In my high school in Dubai you were either a Goosebumps or a Spookesville kid. I’m not sure if the latter was as widely read, but growing up a geeky, overweight teenager the series appealed to me immensely. I even started wearing two wristwatches in imitation of the series’ brainiac character, Watch, who wore four watches to keep track of all timezones where his scattered family lived. It was younger young adult science fiction, a multidimensional world of prehistoric dinosaurs, witches, aliens and time warps that seemed to chronically befall a tiny town in America.

It was a time of great tumult in the Middle East, the fallout from which endures to this day. The United States had invaded Iraq, setting in motion a regional power struggle that split communities along sectarian lines. Friends whose sect I never cared to know suddenly started proclaiming themselves Sunni and Shia. I was angry at the world. At times of great distress, you retreat into narrow identities, whether they are social or political, nationalistic or sectarian. I saw the world in black and white.

I devoured books on early Islam, the heroic time of the early caliphates, the Prophet’s companions, the Battle of Badr, when 300 lightly armed Muslims defeated 1,000 of Mecca’s elite knights, the battles of Yarmouk, the first conquests when Islam erupted into Persia, Egypt, Palestine. Could that utopian, egalitarian society be recreated?

Books taught me otherwise. Yes, even the cookie-cutter thrillers I grew to disdain as my literary tastes became more “refined.” The Da Vinci Code and Huck Finn, Thus Spake Zarathustra and Spookesville, The Pelican Brief and Meditations, the poetry of the dissident Egyptian and Syrian poets Ahmed Fouad Negm and Nizar Qabbani as well as Stephen King’s bizarre psychological mind-fucks.

Intellectual development was a goal, yes. But diverse reading (as far as my teenage mind understood it) wasn’t an end in itself. It taught me that it was okay to have gay friends, that we all had a story to tell if only we would listen, and that that idea was what we had in common. If only we could tell those stories. And more importantly, if we only we could hear them. Maybe then those other things that make us different would be cause for compassion, for embracing difference. It’s why I became a journalist, so I could hear those stories, and then spread them far and wide.

And more than that, it taught me that there can be no utopia while human beings exist. We are not automatons, we are fallen beings in a fallen world, every drawn breath a testament to our mortality, every moment an age. It makes more sense to live in the world we have, than to die in pursuit of one that never will be.

So I kept reading, even as I glimpsed Mecca on the horizon.