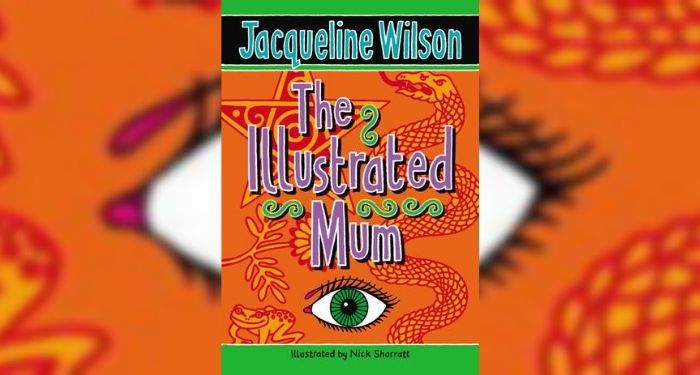 Jacqueline Wilson is a former Children’s Laureate whose children’s novels have been translated into over 30 languages. Through her writing, she speaks about the issues and challenges that increasingly threaten kids. The constant state of fear and uncertainty that they live through because of parental abuse and neglect, demands collective attention, empathy, and dissection. Wilson is one of the most renowned writers who shed light on a completely different side of children’s literature.

I read Jacqueline Wilson’s The Illustrated Mum in my early teens. Even though our circumstances were very different, Wilson’s 10-year-old protagonist Dolphin’s story resonated with mine. In my childhood, I haven’t come across a lot of books that portray the darker side of families. Dolphin’s mother, Marigold, was bipolar. She was a binge drinker, subjecting Dolphin and her sister Star to her dramatic mood swings and extreme emotional instability. In Marigold’s agitated, withdrawn, and sometimes delusional temperament, I saw my father.

The aftereffect of abandonment that Dolphin and Star were trying to survive, hit too close to home. On several occasions, Dolphin and Star were left at home unsupervised. The bouts of maternal affection gave them enough happiness to know how awful it was to lose it. Marigold’s deliberate abandonment of her daughters, especially when she became too busy partying that she forgot about her children, reflected how far she was from her kids, not just in body but also in spirit. But like the determination of grass to grow defying the unending stream of obstacles, the two sisters soldiered on, filling me with newfound inspiration.

While I had already stopped believing in the fairytale of overcoming parental callousness by then, Star and Marigold’s story kept me going. Times when I used to lie down on my bed all day, stricken down by the intensity of my own efforts to cling to life, I revisited The Illustrated Mum. Star and Dolphin’s everyday struggles, though as depressing as mine, livened up the tedium of having to live with a father who couldn’t care less about his own child. Subconsciously, I was always holding myself responsible for my father’s mercurial whims. Reading Dolphin’s narrative was the first time I had an epiphany that to be put through parental indifference is not my fault or personal responsibility. The children’s literature I was exposed to mostly constituted of happy families, with caring mothers and doting fathers. Though I will always carry the aftermath of paternal apathy, I found solidarity in Dolphin’s story. There was great reassurance, relief, and probably also a teensy bit of hope in knowing that I am not an anomaly, that if they can keep living, I can, too.

Lola Rose charts the journey of 11-year-old Jayni, who lives with her father, mother, and younger brother. The father, Jay, was a physically abusive husband. As is seen in children with dysfunctional family backgrounds, our young protagonist prioritized her mother Nikki’s well-being over her own. When the domestic violence escalated, her mother ran away from Jay with her two children, very much like my own mother. To prevent Jay from tracking them they changed their names. Jayni became Lola Rose and her mother took on the pseudonym Victoria (Vicky). Despite moving to London and starting a new life, Vicky was neglectful towards her children, so much so that she was not at all hesitant to stay out till midnight, leaving her children to their own devices.

Holding together families that are meant to break is like setting up a stage that was overdue for a collapse, as we see in Lola Rose’s case. While reading her story, I felt as if Wilson had put words to an experience I had never been quite able to distill. Like Lola Rose, I kept trying and hoping for things to change. And very much like her, mine too was a desperate sort of hope, the kind that is borne of nothing more than habit. In my world, sensitivity and tenderness had already been socialized out of fathers. Knowing that people like Lola Rose existed, in a society where I was the object of negative speculation for being the kid of a divorcee, was enough on most days. I was always looking at everyone either with antipathy or foreboding. When I was mostly laughed at for my often irrational worries, I found solace in rereading Lola Rose. Though there is no justification for parental betrayal nor any pros of being the child of a broken family, Lola Rose’s narrative taught me that even if my life was wobbly, it was more alive in its crookedness than for its perfection.

Wilson gave me books that I revisit time and again. As an adult, I am doing a much better job at taking care of myself. But reading Wilson’s novels still feels like talking to a friend I never had but always needed. To quote James Baldwin, “You think your pain and your heartbreak are unprecedented in the history of the world, but then you read. It was books that taught me that the things that tormented me most were the very things that connected me with all the people who were alive, who had ever been alive.”