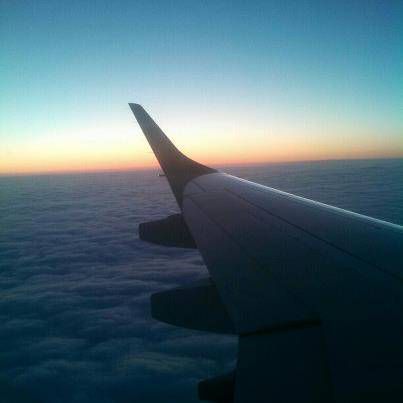 Reading is solitary. I rarely read outside my house, mostly because I rarely leave my house. So those soul-crushing moments when a book illuminates and disturbs the stagnant pools of my otherwise cold, immovable heart–I’m all by my lonesome for those. I can stuff them down and go eat a cookie and pretend nothing ever happened. And then I got on a plane and read Gilead, and had to have my ideas about grace and living torn down and rebuilt while sitting next to a guy who wouldn’t stop playing Angry Birds with the sound on.

Gilead is about an elderly preacher in the Midwest who has a very young son. He’s writing down all the things he’ll never get a chance to say to the boy because he’s old and dying. It’s not an epic, there are no feats of derring-do that usually inspire readers to go out and…do daringly. But the prose made my heart grow three sizes, and for one 3-hour flight (well, two flights because CONNECTION) I was a little less curmudgeonly. Meanwhile, life in-flight went on as usual. It was awkward.

When we started to taxi, I was here: “That feeling of a baby’s brow against the palm of your hand- how I have loved this life.” And a few pages later, here: “In eternity this world will be Troy, I believe, and all that has passed here will be the epic of the universe, the ballad they sing in the streets.” The grudging modicum of gratitude I felt to not be sitting on the tarmac seems cheap and sad now, Robinson. THANK YOU VERY MUCH.

When a baby started screaming as we took off, I was here: “Any human face is a claim on you, because you can’t help but understand the singularity of it, the courage and loneliness of it.” The man sitting behind me started cursing the child under his breath. Instead of agreeing with him as is my wont when presented with screaming kids that aren’t my own, I wanted to throttle him with his seat belt (and then I had to deal with the weird hypocrisy of THAT feeling and then I got confused and just stared out the window).

When we finally reached cruising altitude and the fasten seatbelts light went off and the guy next to me decided to ignore me, I got to this: “AGAIN, all any heart has ever said, and just as the word is said the moment is gone, so there is not even any sort of promise in it.” I love you, plane people! We’re all so alone! But together in our aloneness!

The flight attendant is asking me if I want anything to drink. I’m here: “Transgression. That is legalism. There is never just one transgression. There is a wound in the flesh of human life that scars when it heals and often enough seems never to heal at all.” The flight attendant is beautiful, not just because she has on really nice earrings, and I use my “please” and “thank yous” extra hard.

Mid-flight, I’m only paying half-attention to what I’m reading because I’m feeling melancholy about unrelated stuff and consequently feeling like a wuss because melancholy is for wusses, and then I read this: “I believe there is a dignity in sorrow simply because it is God’s good pleasure that there should be.” I feel like I’m being punked, but I try to give myself a break–an entirely new endeavor. I look out the window at this sight 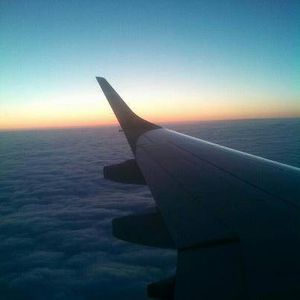 and then read this: “Cataract that this world is, it is remarkable to consider what does abide in it.” What the fuck is going on? AM I ON CANDID BOOK CAMERA? FINE, I’ll consider the remarkable nature of what abides in the world. A few minutes later, the guy next to me scoots over as I try to hide the fact that I’m a sniveling ball of FEELS.

Landing gear coming down, the ground getting closer, here: “In every important way we are such secrets from each other, and I do believe that there is a separate language in each of us.” Exiting the plane, I try to shift my perspective, making my fellow passengers less like annoying objects that move too slowly and more like phenomena that might have something to do with why I’m here in the first place. I’m surprised when my husband tries to talk to me in the terminal–doesn’t he know I’m a totally new person now? Isn’t it evident on my face? I should be glowing like Moses coming down off the mountain, I think. No? Bueller?

I’m sure the book would have broken my heart no matter where I read it. But doing so in an arena where I couldn’t escape a crowd of strangers made it feel more like accidental performance art.