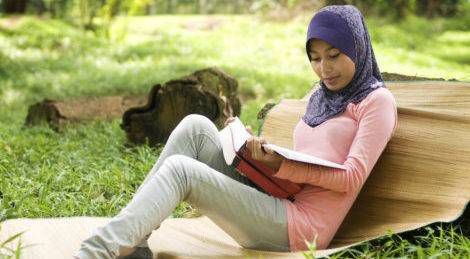 This is a guest post from Adiba Jaigirdar. Adiba is an Irish-Bangladeshi writer, poet, and teacher. She resides in Dublin, has an MA in postcolonial studies, and loves to read everything and anything. Follow her on Twitter @adiba_j.

I have always been a reader, ever since I was blessed with the ability to be literate. I had an entire closet filled with books by the age of six (that my grandmother proudly boasted about to anybody who would listen). And sometimes, I used to steal my brother’s school books in order to find something new to read.

As a kid, reading came second only to my favourite hobby – writing. But even in my writing, I could never recreate facets of my own reality. I wrote about the characters that I read in books – white girls with blue eyes and blonde hair, despite the fact that the only two countries I had ever resided in were Bangladesh and Saudi Arabia – two countries where blonde hair and blue eyes are rather scarce.

The first time I saw a reflection of myself in media was when I began watching Avatar: The Last Airbender at the age of twelve – a TV show that is still an important part of my life, and changed me for the better. But this same reflection didn’t appear in book form until much, much later. For most of my young life, I found myself holding onto scraps that felt lackluster – at best. While I was devoted to the world of books, the literary world was never devoted to me.

It was only when I began my undergrad studies in English literature that I finally started to explore a newer facet of literature. Books that represented a wide variety of people and experiences. Things that were both familiar and unfamiliar all at once. One of the reasons why I decided to go on to study Postcolonial literature in college was to fill up some void, and to realise that I wasn’t the only one who had felt it.

It was after I began reading books by Jhumpa Lahiri and Amitav Ghosh, that I finally realised I could also write books like that. So my first non-white main characters started appearing in front of me on the page at the age of twenty-two.

And while I loved all of the books I’ve had the privilege to read during my studies – books that were steeped in politics and history(the perfect books to study in a literature course) – I’ve realised that it’s more important than ever that we take books away from political climates too. To get rid of the idea that we only deserve to be represented in a book about politics or racism.

Growing up, those were the only books where people of colour were allowed to exist – where racism was the main plot point. Recently, reading books like Karuna Riazi’s The Gauntlet and Ayisha Malik’s Sofia Khan is Not Obliged has made me realise the importance of pushing for inclusive books in all aspects of the literary industry.

The Gauntlet is a middle-grade novel which follows Farah, a young Bangladeshi-American girl who is thrown inside a gameboard, and must play to save her friends and little brother. Sofia Khan is Not Obliged is a completely different book altogether. It follows the escapades of Pakistani-British Sofia Khan, and her escapades in finding a husband, while writing a book on Muslim dating. These are important books because the books are shaped by who the protagonists are – but they are allowed to be much more than the colour of their skin.

I can’t help but think that if Karuna Riazi and Ayisha Malik had existed when I was younger, maybe I would have been writing my reality a long time ago. Maybe I wouldn’t have to struggle for so long against a book industry that only promoted the importance of white characters.