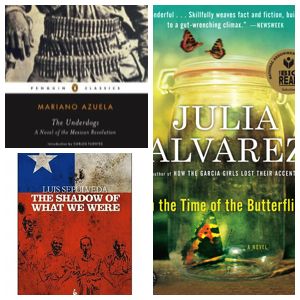 Earlier this year, I explained why reading works by writers of color is so important to me. I promised to share suggestions from my shelves, and I’m here now to finally deliver on that promise.  I’m starting with the part of the world that I know the most about and about which I’ve done the most reading – Latin America.

I’ve picked three books that are available in English, were written about a country in Latin America by a native of that country, and that were written relatively recently. I do this because one of the things that Riot readers have asked for are books that will teach them about other cultures. If the goal is to understand them as they are today, then it makes sense that we look at books that focus on recent history. I also have a weakness for the 20th century literature. There. I said it.

Here are my picks, complete with the catalog description and a couple of sentences on why I like it.

The Underdogs by Mariano Azuela (Mexico)

The Underdogs is the first great novel about the first great revolution of the twentieth century. Demetrio Macias, a poor, illiterate Indian, must join the rebels to save his family. Courageous and charismatic, he earns a generalship in Pancho Villa’s army, only to become discouraged with the cause after it becomes hopelessly factionalized. At once a spare, moving depiction of the limits of political idealism, an authentic representation of Mexico’s peasant life, and a timeless portrait of revolution, The Underdogs is an iconic novel of the Latin American experience and a powerful novel about the disillusionment of war.

I first read this book as part of an independent study on the Mexican Revolution in college. It is a really intimate depiction of what life was like in Villa’s army.  After reading it, it becomes a lot easier to understand why Mexico is in its current state. It’s a chain of events that was set in motion a long time ago.

The Shadow of What We Were by Luis Sepulveda (Chile)

In a warehouse in Santiago, three aging friends meet and await the arrival of a man from their past. Once militant supporters of Salvador Allende, they have grown disillusioned in the three and a half decades since his assassination. Their city has changed under Pinochet, and so have they: heart troubles, thinning hair, a few pounds too many around the waist; there is little left to connect them with their glory days. But now, the three friends have been called together at the behest of the anarchist, Pedro Nolasco, a.k.a. The Shadow, to carry out one final revolutionary gesture. But Lucho, Lolo and Cacho wait in vain. On his way to the rendezvous, The Shadow meets with a sudden, gruesome and blackly comic death. Without their fearless leader, the three men must turn to Coco Aravena, the most reckless of their former comrades, for guidance. After years of playing second fiddle, this is the bumbling Coco’s chance to show them what he is capable of.  The Shadow of What We Were is a humorous and moving examination of what becomes of a glorious past in the inglorious present.

I didn’t expect a novel about a group of past-their-prime revolutionaries to actually be funny, but it was. It was damn near hilarious in places. Their reunion amounts to what can only be described as a comedy of errors. Think Cotton Hill and his cronies, but in Spanish.

In the Time of the Butterflies by Julia Alvarez (Dominican Republic)

It is November 25, 1960, and three beautiful sisters have been found near their wrecked Jeep at the bottom of a 150-foot cliff on the north coast of the Dominican Republic. The official state newspaper reports their deaths as accidental. It does not mention that a fourth sister lives. Nor does it explain that the sisters were among the leading opponents of Gen. Rafael Leonidas Trujillo’s dictatorship. It doesn’t have to. Everybody knows of Las Mariposas-“The Butterflies.”In this extraordinary novel, the voices of all four sisters-Minerva, Patria, María Teresa, and the survivor, Dedé-speak across the decades to tell their own stories, from hair ribbons and secret crushes to gunrunning and prison torture, and to describe the everyday horrors of life under Trujillo’s rule. Through the art and magic of Julia Alvarez’s imagination, the martyred Butterflies live again in this novel of courage and love, and the human cost of political oppression.

This is one of those rare cases where I actually saw the movie before the book, and that was okay. They are both beautiful and upsetting. You have to admire the bond between the sisters just as much as you do their dedication to the cause of freedom. It’s a must read.

Got any other recommendations? I’d love to hear them!