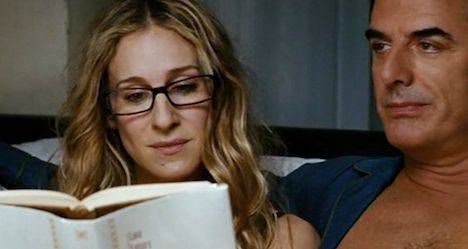 I have a love/hate relationship with Carrie Bradshaw. She taught me to love fashion!—but that led to a bit of credit card debt. She was unapologetically herself, and that helped me to be the same!—but I’m pretty jealous of her shoes.

But far and away, I get most ambivalent around that columnist-cum-fashion-icon character when it comes to her relationships to reading and writing.

If you detect a hint of jealousy: yeah, that’s there. I write in pajamas, not elaborate faux-fur arrangements, and I have no room full of Manolos. But perhaps there are also fair reader-beefs to take up with the woman who made heels seem like a good idea again:

Writers who’ve done their time in the subsisting-on-beans-and-ramen camp, particularly in New York City, are always going to take issue with Carrie’s absurdly unrealistic lifestyle; it’s an easy nit to pick when you’re moments from deadline and the perfect words still elude you. Still, Sex and the City isn’t something that a writer, or reader, can only like despite its bombastic turns; it’s a something we return to for them, bad puns and all.