Election 2016 had me, as with many other Americans, completely disillusioned with the world I live in. I found myself in a complete reading slump. An activity I usually turn to for escapism, I found myself instead cramming my exhausted brain full of old episodes of Friends and Scrubs. During the times I would habitually be curled up with a book, I found myself turning to the comfortable, the silly, the NBC comedies of yore. I was being bombarded nonstop with proof that my faith in humanity might have been misplaced, and therefore spending my evenings grappling with all the -isms I felt were being applauded by certain parties just didn’t seem appealing. I needed stupid. I needed fun. I needed Chandler Bing.

Turns out, I should’ve been reading instead.

My complacency made it so that the only thing of substance seeping into my brain was the hateful bigotry and lack of basic human decency so many of my fellow Americans appeared to be okay with. My entire life, literature has given me a window into the lives of other people, people who have lived different lives and are fundamentally different people. The empathy and compassion I’ve learned for people who are not me is one of the reasons reading is such a definitive part of who I am as a person. It’s my invitation to a party to which I’m not normally invited but desperately need to attend.

However, instead of shoring up that empathy for the tough fight ahead, I broke. I cut myself off from the people that could not only teach me more about the world, but also the people who could give me the ability to embrace those around me for whom this election felt like a very personal attack. I put my books down. I abandoned them when I needed them most.

And then something curious happened…

Donald J. Trump was elected the 45th President of the United States of America.

And immediately, I reached for words. I reached for books. I reached for the people who continue to share the deepest part of themselves in an effort to educate the world on humanity. I clung to them like a life preserver on a Titanic that is being captained by an egomaniac who surrounds himself with bigoted first mates. 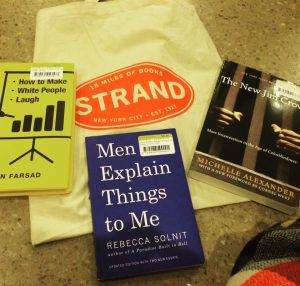 My purchases from the Strand during Book Riot Live. What I’m lovingly referring to as my “Fuck Trump Reading Kit”.

And now… well, now I’m reading out of spite. I will continue to plant and water compassion within me as our nation is being run by people without. I will educate myself on the abuses of power that impact minority groups every day. I will use that empathy and knowledge to speak out for marginalized voices in a time when rich white dudes feel that their hate has finally been validated. I will recommend books to not only comfort others in this fearful time, but to also encourage and inspire someone else to extend that same show of love and decency to their brothers and sisters.

As we enter an administration that does not respect the 1st Amendment right of its people, books will become more important than ever. We may be ushering in an era where the written word is in jeopardy. So appreciate it, protect it, and never again underestimate its power to change the world.