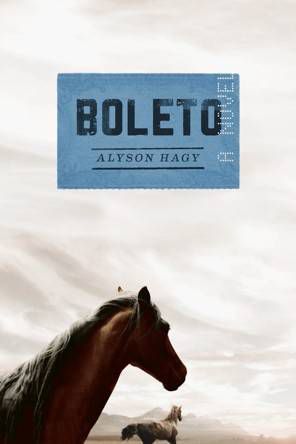 A boy and his horse—what could be more romantic? I mean, other than a girl and her horse, or me and the horse that perhaps someone will finally buy me. Oh yes, I know: reading about a boy and his horse! 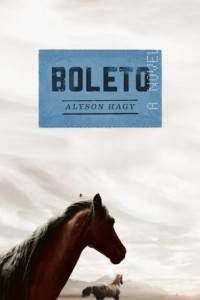 Of course, not everything in a romance is pretty. Alyson Hagy’s Boleto, published this year, gets straight to it. “She was a gift,” the novel opens, “though he did not think of her that way for a long time.” The horse William Testerman buys at the beginning of the book is known for most of its length simply as “the filly,” and he purchases the two-year-old with big plans, so big he’s afraid to talk about them. He’s not going to break her for rodeos and start riding her right away. Testerman has the much grander plan of making her into a polo pony—which he doesn’t actually know how to do, knowing nothing about polo himself.

Will is a Wyoming boy, 23, though “[t]here were days he felt older. And days he felt as lost as a blind pup.” His family has a farm, but one too small to live off its profits alone; both parents and an older brother work in town. He sees both better and worse around him, from schoolmates living in mobile homes to wealthy dude ranch tourists and private ranch owners with independent means. And then there’s Don Enrique, the Argentinean businessman Will meets at a rodeo and is counting on to get him up to the next level of horse-training—for polo. Don Enrique, when he’s around at least, lives in California, where Will and all his Wyoming friends know the real horse money is, and Will is hoping the filly is his ticket there.

As it turns out, she is, though not quite in the way Will hoped. With Hagy’s novel focused both on Will’s education as a man in the world as well as the economic changes wrought in the American West and the new realities of contemporary class in the region, I noted a close relationship with a contemporary classic this time, Cormac McCarthy’s 1992 All the Pretty Horses. 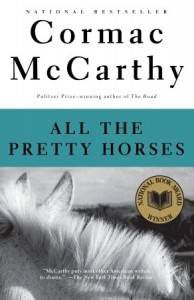 McCarthy’s novel is historical fiction, set in Texas and Mexico shortly after World War II. Its protagonist, John Grady Cole, also sees his horse (and horsemanship) as a ticket out. In his case, after the death of his grandfather, his mother has decided to sell the family ranch—meaning he can kiss his presumed inheritance goodbye. With a friend, he simply packs a few things and climbs on his horse, which can take him anywhere. They arrive at a hacienda where they are able to get work as farmhands. John Grady in particular has enough experience with horses that he impresses the foreman by breaking 16 feral mares in record time.

But like Will Testerman, who simply wants to find a place to work where he can learn and make his way from there, John Grady is about to find out things aren’t that simple. Both characters are street-smart, know better than to speak before they think, and focus on meeting any given situation ethically and maturely. But as they leave the world close to their homes, the actors they encounter are, if not bad, at least untrustworthy, and even caution and suspicion aren’t always enough to come out ahead. At least not without a fight.

Will spends a lot of time throughout Boleto talking to the filly. They’re just getting to know each other after all, and toward the end of the novel he tells her something about himself.

How there once was this kid from Wyoming who wanted to live in a uncomplicated way and make horses into the best horses they could be. And how this kid, because he was too stupid or too broke or too ignorant about what went on inside of his own head, couldn’t ever seem to make that happen. It ought to be simple, right? You do a thing, and you do it right, and it gets done. But this stupid Wyoming person kept reading the situations wrong. He kept getting the people so wrong that it didn’t matter if he got the horses right.

It echoes almost eerily John Grady’s misgivings about his own former employment in Mexico, where he did his best work, cared about the work, and cared about the horses he worked with—but cared a little too much about the hacendado’s daughter. “I worked for that man and I respected him and he never had no complaints about the work I done for him and he was awful good to me,” John Grady tells a judge he meets, again toward the end of his novel. “And that man come up on the high range where I was workin and I believe he intended to kill me. And I was the one that brought it about. Nobody but me.”

Will and John Grady are embodiments, separated by decades, of the same romantic Western masculine sensibility, focused on hard work, skill, integrity, fortitude, and quiet, and they both face very similar tragic Bildungen—because what other end can there really be for a boy and his horse in a romantic Western novel?