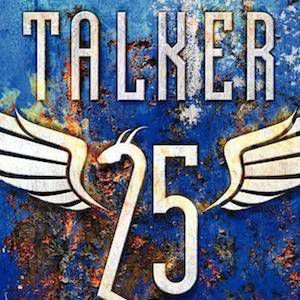 Earlier this year, at ALA in Philadelphia, I managed to snag a copy of Talker 25 by Joshua McCune from the folks at Greenwillow Books. And let me tell you. Getting this book was definitely the highlight of my convention.

In Talker 25, readers are flown off to a world where dragons have invaded… but this isn’t your usually dragon story, where you’re seeing castles and knights and what-have-you.

This takes place in a dystopian-esque future where there is a war between humans and dragons.

As a result, the landscape has been ravaged, the military rules, and color is swept off the map. Dragons can’t see black, so houses, clothing, etc… the world is darkened to keep us safe. Because despite the fact that most dragons can be found on reservations, attacks still happen.

The story centers on a young woman who gets thrown into the war and discovers horrifying secrets surrounding the government, military, and media. She, with the reader, discovers the world is a very cruel, very dark place. It’s like The Hunger Games and the movie Reign of Fire had a baby, a baby that’s incredibly violent and leaves you feeling broken and sad. Seriously, this book brought the heartbreak.

I seriously cannot recommend it enough. I’ve never read anything quite like it, and I’ll be first in line for the sequel.

But while I’m waiting, and potentially, you’re waiting for the next book (Talker 25 comes out April 22nd, the sequel TBD), here are a few other reads you can pick up. Seraphina (Rachel Hartman): Ah, Seraphina. This book was one of the biggest surprises to come across my desk. In Hartman’s wonderfully written world, dragons have become a part of every day human society after a serious war, shape-shifting into humans and helping mankind as educators.

However, the truce between man and beast is growing thin, and since this is YA, our main character is caught in the middle. No spoilers here, but the reason why she gets all wrapped up… it’s just so good.

I’m hungrily awaiting Shadow Scale, which is due out in March of 2015. The Inheritance Cycle (Christopher Paolini): The great thing about Talker 25, is that it’s the first in a series. You know there’s going to be more.

But, sometimes it can be frustrating, waiting for a series to continue or conclude. So here you go, pick up the Inheritance (you know, Eragon) series by Christopher Paolini, which is done already.

You’ve got four books (Eragon, Eldest, Brisingr, and Inheritance) to get through, which you can happily read while waiting for the next Talker book. Jordan’s three book series (or 3.5 book series, there’s an eBook short) introduces readers to a love story between the hunted and the hunter.

The hunted? A woman who can shift from human to dragon. The hunter? A handsome man who is sworn to hunt down her kind.

This is a series that’s been on my reading list for a while, and with a movie in the works, I should probably get into them soon. You too!

Now, I’ll admit, I haven’t read that many YA dragon books. These are just some of my favorites. So readers! Sound off. What are some of yours?