Even if you’ve never watched a single movie (and if not um… maybe you should give that newfangled technology a try), chances are you know who Alfred Hitchcock is. One of the greatest directors of the 20th century, Hitchcock wasn’t just a man who made movies, he was a cultural phenomenon. The term “Hitchcockian” is immediately understood as describing coiling suspense, mystery, and a minimalistic visual style that sparks the audience’s imagination.

Another important thing about Hitchcock—and the reason why we love—is that he was a massive bibliophile. There’s a reason why nearly all his movies are based on books: Hitchcock loved reading horror and suspense tales, and he respected books as their own medium. His understanding of books, and how they differed from the nature of cinema, led to some of the best book-to-movie adaptations ever filmed, including Daphne du Maurier’s Rebecca.

While you can definitely read all the books Hitchcock adapted to film, if you want to expand a little beyond that horizon and increase your understanding of Hitchcock the filmmaker at the same time, I recommend starting with the following: The 39 Steps by John Buchan
Okay, yes, Hitchcock did adapt Buchan’s most famous novel to the screen in 1935, and I did just say that this article is about looking beyond the obvious book-to-movie pairings. But The 39 Steps is the single exception because: 1. it’s a great spy novel all its own; and 2. Buchan was a huge influence on Hitchcock. Hitch owned and read every book Buchan ever published (about 35 novels and even more non-fiction works), and it was from Buchan that Hitch learned how to tell a story. Classic “Hitchcockian” elements like the wrong man plot and the MacGuffin could technically be called Buchanian, as they’re central to many of his novels, including The 39 Steps. The Man In Lower Ten by Mary Roberts Rinehart
A hugely successful mystery novelist in her day, Rinehart is frequently called the American Agatha Christie; but I prefer to think of her as the American female Hitchcock. This rollicking, fun mystery has multiple elements cinephiles will instantly recognize from Hitchcock’s films: a mysterious woman whom the hero falls in love with, humor, a man whose legit hobby is amateur detective (was this, like, a thing?), a MacGuffin, and a “wrong man” plot. Plus it’s just a kick-ass book that, despite having been written over 100 years ago, feels surprisingly modern. The Salinger Contract by Adam Langer
My favorite read of January 2014, The Salinger Contract is a perfect example of Hitchcock’s rule for suspense: “Suspense is like a woman. The more left to the imagination, the more the excitement.” This film noir-ish thriller has all the old timey characters you’d expect to encounter in a black and white movie: a suspicious billionaire, a Joe Schmoe hero who accepts an offer he can’t refuse, and a fatally cool blonde. Not to mention the humor and super-twisty mystery plot. Hitchcock/Truffaut
If you’re a Hitchcock fan, you owe it to yourself to pick up a copy of François Truffaut’s 1966 interview (or you can listen to it for free at Archive.org). Hitchcock is astonishingly open about his working process, his successes and failures, the times his ego got the best of him, what his worst movie was, and how to deal with criticism. Basically 80% of the quotes you see from Hitch come from this interview, and the obstacles Hitchcock had to overcome are inspiring for anyone in a creative profession. But the truly compelling part of the interview is that it’s a conversation: Hitchcock clearly respects Truffaut’s opinion, even asking him at several points what he thinks. A book I continually reference (including for this post). 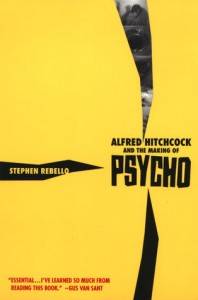 Alfred Hitchcock and the Making of Psycho by Stephen Rebello
Today we take the film Psycho for granted, without realizing how groundbreaking it was when it was released in 1960, nor knowing how much Hitchcock had to fight not to just get it made, but it get it made the way he wanted it. This fascinating microhistory (the basis of the 2012 film, Hitchcock, which I also recommend—it’s surprisingly delightful) details the story of the film, from the real-life serial killer the true crime book was based on, to how the film was shot and how it has influenced horror movies ever since. Fun fact: Psycho is one of the few films that legitimately scares the crap out of me every time I watch it. Alfred Hitchcock Presents anthologies
In 1957, Simon and Schuster asked Hitchcock if he’d lend his name to a series of story anthologies that would be branded to go along with his television series, Alfred Hitchcock Presents. They’re not in print now, but you can still find them in used bookstores (see, for example, my volume: Stories Not for the Nervous). The number of now-famous writers who wrote for the AHP anthologies and/or episodes for the TV series is staggering and includes Roald Dahl, John Cheever, Ellis Peters, Robert Bloch, Ed McBain, and Isaac Asimov, among countless others.