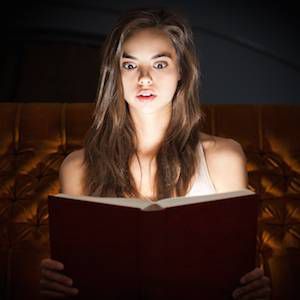 When I was younger, I tricked my mom into letting me rent Silence of the Lambs (and by tricked I meant annoyed the crap out of her until she couldn’t take it anymore), and then watched it about 20 times until we had to return it later that week. I wanted to be Clarice; I wanted to be the only one who could get inside the mind of the serial killer and catch the bad guy (and then have the even more dangerous serial killer- the one who helped me- have a magical soft spot for me so he doesn’t come eat my brains out when he escapes from prison).

Around that time Christopher Pike was my favorite author. I also dabbled in R.L. Stine before the Goosebumps series (we’re talking Blind Date, The Babysitter, and Hit and Run). And who could forget the Scary Stores to Tell in the Dark series by Alvin Schwartz? I would even go so far as making up scary stories about what would happen if I was the only one left in the house at night (I lived in a household of six; not often alone), and how I would be killed and how it would happen… which meant that even when I got to the age when normal people start being okay left alone at home for half hour or so, I rarely got left in the house alone after dark (probably because nobody wanted to hear about it).

Fast forward to seventh grade, I go to a slumber party and can’t wait for the movie of the night. Candyman. Have you seen Candyman? Have you seen Candyman as a twelve year old girl? I have…and I watched it twice for good measure (two decades later, I still avoid the mirror if the lights are out in the bathroom). Candyman was the tipping point for my mother. Typically, I would scare myself silly and then carry on a few days later, but I couldn’t get over Candyman. Nightmares, extra scary stories coming out of my mouth, probably scaring other children (mostly just retellings of what was going on in my brain), and a new fear of the bathroom (aka needing a sibling or parent to turn the light on BEFORE I went in every time)…this was my mom’s tipping point. No More. No more scary movies, no more scary books, no more scary stories. It was one thing if I was the only one affected, but when it effected the other members of my family my “hobby” had to be over.

At that point I had to switch to other things to get my thrills in other ways, which manifested in me bringing home a variety of animals and insects as pets because I desperately wanted a pet that I didn’t have to share with three siblings. This included a snail that accidentally got its head cut off by the top of its plastic house because it tried to escape, a mouse that got eaten by one of our cats because I didn’t put it back properly when I heard it escape in the middle of the night, and a can full of mealworms that had to be flushed down the toilet in the wee hours of the morning because, nightmares. This was the tipping point for my mom on unusual pets…No More. (Quick note: I have no idea what my science teacher was thinking sending me home with 30 mealworms. My mom tried to veto this adoption as soon as she saw what was in the coffee can I pulled out of my backpack, since she did not want 30 beetle larvae springing into adulthood within the month. Being me, more stubborn than…well, probably anyone you know, she momentarily gave up the fight and was immensely grateful for the reason to flush these buggers down the toilet two nights after they entered our home.)

So, there ended my love of horrific things. After that, I realized it really was a better (i.e. less stressful, anxiety-ridden) life steering clear of things that purposefully make me need to sleep with the lights on…in my parents’ room…with our German Shepherd next to me.

And then I turned 25. That was the year, during October, that they put up a giant display of books on serial killers at the Barnes and Noble at The Grove in Los Angeles. Thinking, “I got this… I’m a grown-up now,”  a friend and I sat there for FOUR hours and read these books in the giant comfy chairs that they had positioned near the display table; pausing only to tell each other the most heinous facts that we were finding. It was daylight, I was with someone, and I was not scared. Fast forward several hours to me alone in my apartment going down an Internet rabbit hole about Richard Ramirez (aka The Night Stalker). It was an unusually hot summer and I didn’t have air conditioning, but I slept with the windows closed for over a week. A few months later I borrowed a DVD of The Exorcism of Emily Rose and got so scared I had to take it outside and put it under the door mat because I didn’t want it in my house. It was around then that I imposed a sanction of No More on myself.

So, why did I pick up The Winter People several months ago? And then Night Film? And why did I agree to start True Detective, while at a friend’s house on vacation this summer? And then, while binge watching it by myself when I got home, allow myself to get sucked into the Internet researching serial killers to the point that I didn’t sleep for three nights because of terrifying dreams? And why, after all of that and my entire history with the horror genre in general, am I still getting ready to read Broken Monsters and Horrorstör?

Because, I’ve come to realize, horror does something that no other genre can do.

Horror doesn’t just terrify us, it engages our minds and relieves it from over-thinking everyday feelings by engaging a different feeling… um, terror (but still a different feeling!). As Stephen King said, “We make up horrors to help us cope with the real ones.” Nobody’s life is perfect in horror- in fact it’s usually the opposite- so there’s nothing to make you feel bad about yours. Marriage going badly? No worries, I have yet to encounter a love story in a horror book that I would want. Money woes? Wealth does not save people in this genre, in fact, it usually just makes things messier. Didn’t get to go on a vacation this year? Well, everyone got eaten by a shark at the beach anyway, so you lucked out. See what I mean? With this foray back into horror, I’m understanding something I never got before- the reason why horror is the ultimate escapism genre: because when you are absorbed in a horror story, your brain is instinctually telling the rest of your body to pay attention because we might die. Therefore, it is harder to start letting your mind wander off into the “Don’t forget to worry about this, this, and this today,” mode of our very typical brain patterns. Of course, you don’t have to have something particular you are trying to escape from to enjoy horror (I don’t, at the moment, and am enjoying the genre for entertainment value alone), so it’s also a very useful antidote for plain old I’m Bored Syndrome, or just because you like really scary stuff. The fact that “horror (is) rooted in sympathy . . . in understanding what it would be like to suffer the worst,”* is just a cherry on the sundae.

“But, Wallace, I can’t. I read something scary and it comes back to haunt me when I go to bed at night!” Well yes, the bad thing about tricking your brain to think you are in danger (whether for sport or for distraction) is that our brains are also hardwired to remember terrifying events in detail for survival reasons. It can even manifest as Post-Traumatic Stress Disorder or as a phobia. So, there’s that. Don’t say I didn’t warn you. Sweet dreams.