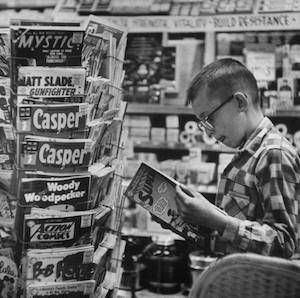 This month’s poll is sponsored by Kobo. Kobo has over 4 million eBooks in dozens of categories – from bestsellers to indie breakouts, plus world-class eMagazines and over 100,000 kids’ titles. And with the free Kobo App, you can read right on your smartphone, tablet or computer – and switch between devices without losing your spot. Plus, purchases through Kobo can support your local independent bookstore.

Comics are having something of a moment. There are a floppity jillion comic book adaptations on the slate; people who have never read comics before are giving them a shot; and there’s been a real shift in the cultural conversation around the medium. We’re excited about it (which is why, you know, we recently launched a comics site called Panels), so we got curious about how many Riot readers are into comics as well.

530 Riot readers responded to the poll. Let’s have a look! And remember: the data are most likely not representative of all Riot readers. Folks who are into comics are more likely to opt into a survey of this nature, and a whole host of other factors could also affect responses.

Have you ever read a comic? 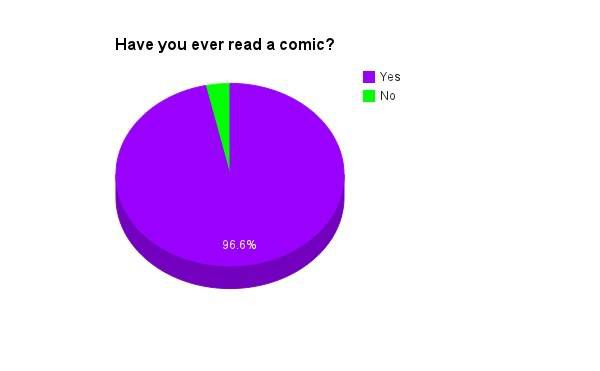 Have you read any comics this year? 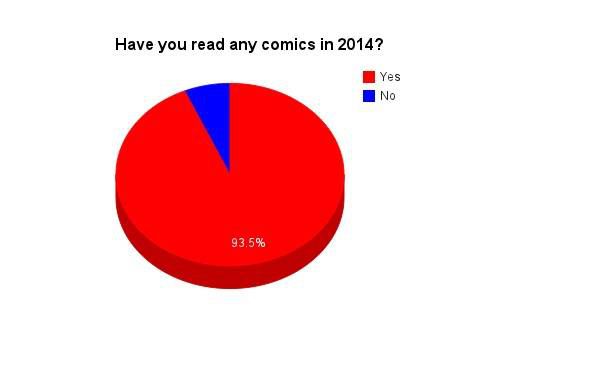 How many comics/series do you read regularly? 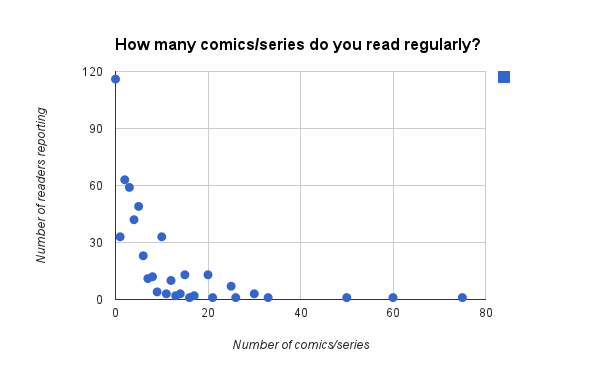 This is where it gets interesting. Most readers report that they have read at least one comic this year, but more than 22% (116) reported that they don’t read any comics regularly. Of readers who do keep up with some comics/series, most read 20 or fewer comics regularly. Is that a lot? A little? Are these readers who make casual forays into comics? I have questions! It’ll be fascinating to see how this stacks up with the survey we’ll do of Panels readers someday.

Here’s a closer look at the spread without the outliers who reported keeping up with 21 or more comics on a regular basis. It’s interesting to see the little spikes at 10 and 15, and I wonder how much of that has to do with readers guesstimating and rounding. 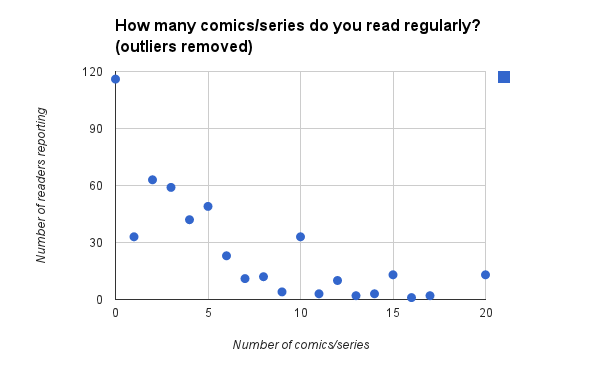 In which format(s) do you read comics?

This was an open-ended item that allowed readers to enter any and all formats in their own words. Rather than providing pre-selected formats for readers to choose from, we identified the most common responses and divided the data into the groups you see below. 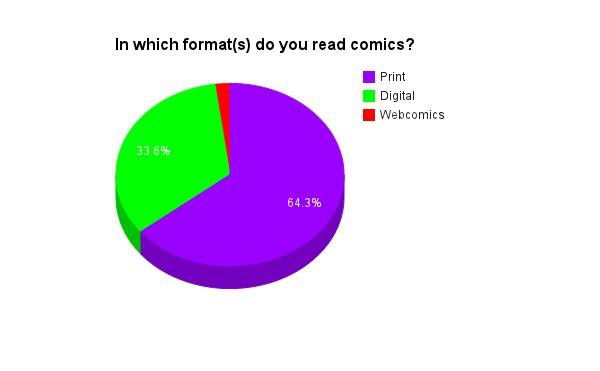 Print comics–both issues and trade paperbacks (which were grouped together for this poll because we did not ask readers to specify preference)–are clearly the dominant format, but digital gets a good amount of love too, and it’s interesting that so many readers (38.7%) read in multiple formats. Slightly more Riot readers consume digital comics than read ebooks, at least according to our 2013 reading habits survey. This could be a real difference (maybe people who are new to comics feel more comfortable downloading than going into a comics shop?), or there could be systematic differences between the populations who responded to the surveys, or an artifact of the time and developments in digital reading since the last survey.

Any thoughts? How does this stack up with your experience of reading comics?

Check out other Riot polls:

20 Books You Pretend to Have Read

Are These the 13 Most Underrated Books?

20 Books You Love to Give as Gifts

Your 25 Favorite Authors of Color

The Top 17 Books That Make You Feel Dumb

The 35 Most Powerful Books You’ve Read

Your 25 Favorite Books from Assigned Reading