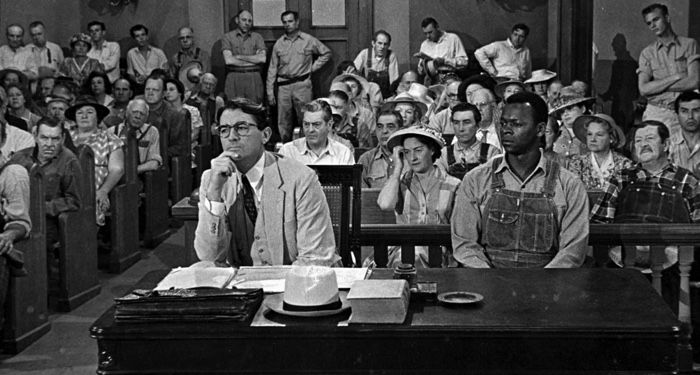 Because I grew up in the American South, and To Kill a Mockingbird by Harper Lee is set in rural Alabama, it was required reading for me in middle school. Now, I know that technically, this book is a young adult novel—maybe the first, from what I’ve read—but so much of it went over my head as a child, the way that so much of it goes over Scout’s head because she is a child.

When I say that rereading To Kill a Mockingbird as an adult is a drinking game, I don’t mean that it’s a “game” so much as it’ll make you cuddle your bottle of bourbon in the corner of your open-windowed bedroom as the pollen blows in and you weep uncontrollably for social justice because ain’t shit changed. So many issues that Scout points out, unawares, in the book, are still very real problems today. Here are a few narratives that exemplify some still-existing issues. 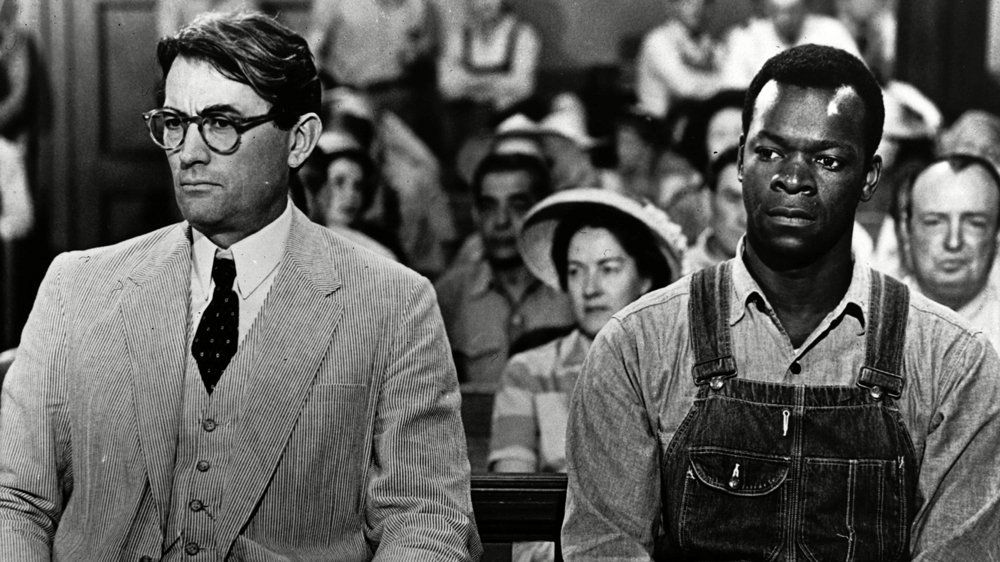 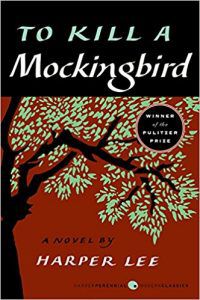 Tom Robinson and the Chifferobe

This is the narrative that most everyone remembers from To Kill a Mockingbird, and it is absolutely the overarching plot. If you recall, Tom Robinson, a Black man who only has the use of one arm, is accused of rape and abuse by a woman who tried to seduce him. Despite overwhelming evidence of his innocence presented by our narrator’s father, Atticus Finch, in a court of law, Tom Robinson is ruled guilty by an all-white jury.

Obviously, Jem’s (and the reader’s) faith in the justice system is really shaken, and while the racism present in the judicial branch is not quite so overt today, it’s definitely still there.

A little less obviously, other white men in the town do not approve of Atticus defending Tom, even though pretty much everyone knows that Tom is innocent. Atticus knows that he will be convicted anyway, and he knows that racist people will not listen to Black people, but they MIGHT listen to him. They don’t listen to him in this novel, but if they were going to listen to the argument at all, it would have to come from someone who looks like Atticus for them to even entertain it.

But back to Tom. All of the Black community knows he is innocent of the crime. Prison is SO bad, though, that he can’t stick it—he’s a good man, and he’s not equipped for that kind of life. He tries to run away, and the guards shoot him dead. Prison takes a lot of good people whom the judicial system fails, even still, and is in desperate need of reform.

So…who DID beat up Mayella? (Mayella’s the one who seduced Tom Robinson and accused him of raping her.) I mean, she sucks, but she DID have a black eye. I remember asking that aloud in 7th grade, and my teacher saying that it was implied that her father beat her up and raped her. I was appalled. I could not get my head around why a father would do something like that. But fathers do that, sometimes, and they intimidate young girls into blaming themselves, or someone who could take the fall for them. Like Tom Robinson. Point two of that adjacent narrative is to help victims of abuse in every possible way, because we are learning, slowly but surely, that hurt people may hurt people.

Burris Ewell and his Cooties

To Kill a Mockingbird also highlights some significant disparities among class in the town. One of the youngest Ewells, Burris, in Scout’s class, has “a cootie,” and none of the students thinks anything of it. I had to ask my teacher about this, too. At my house, “cooties” were germs. (As in, “Mary Kay, don’t drink from that creek, it’s got cooties in it.”) In the novel, though, cooties are lice. Miss Caroline, however, really freaks out about his hygiene and basically embarrasses Burris into truancy. The class explains to her that the Ewells don’t really come to school, anyway, and this is apparent from the fact that when Miss Caroline asks him to spell his name, he can’t.

Walter Cunningham and his Syrup

While we’re on the topic of class, after Scout fights Walter Cunningham, and Jem invites him to dinner, Atticus has a pleasant conversation with Walter, who comes from a family of farmers. Scout finds this incredible, but learns from Atticus that to have a conversation with someone, you should ask them questions about what they are interested in. (This is not so much about social justice as it is about social grace. SO. MANY. PEOPLE. don’t know how to do that.)

But back to the more important issue at hand, Scout Finch is the daughter of a lawyer, and she’s been led to believe that she’s “better” than the farmers. Case in point, when Atticus allows Walter to pour syrup all over his food, Scout asks what in the “sam hill” he is doing, which embarrasses Walter. Scout gets in trouble with their cook, Calpurnia, though, whom Scout respects, and she tells Scout to be polite to company. Scout says Walter’s not company, he’s “just a Cunningham.” Calpurnia sets her straight, and Scout falls in line, but it’s still a thing that needed to happen. This kind of issue still happens today—though, again, maybe not quite as overtly. Scout is a child, and that behavior can be excused once, of course, but the problem is when those disparities in class grow even wider, and into adulthood.

But back to the Ewells, still the most extreme example of classism in the text, Mayella Ewell, while dishonest, is a victim of a pretty significant class disparity in wealth, as well. Though her word is still trusted over Tom Robinson’s because she is white, compared to other members of the town, she doesn’t seem to MATTER all that much—after all, who is protecting her from her abusive, alcoholic father?

Speaking of addictions, let’s talk about Mrs. Henry Lafayette Dubose. I also didn’t understand in my childhood what exactly was going on with her. I knew that Jem and Scout were being punished, and that he had to read to Mrs. Dubose, but what exactly was HER deal? My teacher said Mrs. Dubose was addicted to morphine. I filed that away under my D.A.R.E. training of, “Well, she should have just said no.” Of course, today, we know that nothing is that simple.

Morphine is typically one of the last drugs to be prescribed by people in hospice care, but Mrs. Dubose is a drastically underweight addict. Jem and Scout are to serve as her distractions while she weans herself off the drug. Which just seems impossible to me. What incredible resolve. Atticus describes the action as “real courage,” and it absolutely is, but the medical field has dramatically failed her. Drug regulation and administration is another form of social reform that To Kill a Mockingbird highlights, both in the case of Bob Ewell’s alcohol-induced rage, and Mrs. Dubose’s eventual death from withdrawal.

Boo Radley and his Agoraphobia

While we’re talking about healthcare, let’s talk about the spooky man next door who is actually just afraid of open spaces. All of the children in the neighborhood are terrified of Boo, even though he more or less considers himself one of them. He’s the one who saves Jem when Bob Ewell attacks him in a fit of rage and alcoholism, but little Scout has to escort Boo home. He actually asks her to do it.

I mean it in the sincerest way when I ask…What the hell? Boo Radley spends his entire adult life inside of his house because he is afraid to go outside. I know that this novel takes place during the Great Depression, and that psychology wasn’t even considered a SOFT science yet, but even now, it’s damn near impossible to find mental health care even if you have health insurance. And it’s stupid expensive. Poor Boo, risking his own life to save the lives of the little kids down the street who were subject to an attack from a grown man under the influence of alcohol because of the misconception that the children’s father was classist but NOT racist…are you seeing the cascading failures of our society here?

Atticus and the Rabid Dog

Dear reader, if you know me and my writing, then you know that I’m a lover of horror. Many’s the time I’ve begun watching a horror movie with a friend and they want to know if the animal dies.

The animal dies in this one.

To be fair, the animal is also rabid. Calpurnia herds the children into the house when she sees the dog approaching, and she calls Atticus. He doesn’t want to do it, but because he’s a good shot and the dog might otherwise reach town and raise hell by infecting humans, he puts him down on the first shot. It impresses Scout for two reasons: 1) Atticus shot a dog, and 2) Atticus IS, after all, the best shot in town.

No one wants the dog to die, or to be inconvenienced in even the slightest way, but it had to be done to control the disease. I don’t have to tell you that one of the biggest social reforms we are in need of is controlling the spread of disease.

That’s why Atticus is the real MVP, though, right? And my number one literary crush (followed closely by Dr. Abraham Van Helsing). Not only is he played by the inimitable Gregory Peck, but he does what HAS to be done, for the good of the community—he’s also a loving father who does his best to course-correct his children in their many misconceptions, but to do so lovingly. Also, how great is it when your world finally clicks in perspective and someone whom you’ve loved by default emerges objectively as a Good Person? It’s the best feeling.

I still remember when Scout confronted him about not doing the convenient thing, but doing the kind thing instead: “If I didn’t [defend Tom Robinson] I couldn’t hold my head up in town, I couldn’t represent this county in the legislature, I couldn’t even tell you or Jem not to do something again…Scout, I couldn’t go to church and worship God if I din’t try to help that man.” Even when Scout points out that not everyone agrees with him he says, “[B]efore I can live with other folks I’ve got to live with myself. The one thing that does’t abide by majority rule is a person’s conscience.”

Because we as a culture have gotten so good at equivocating and rationalizing our bad behavior, we let often let our conscience sneak out the back door. That’s why, 90 years after this book takes place, our world is still broken. If y’all can, be an Atticus Finch. If you can’t, at least try. And at the VERY least, pour one out for him on the floor of your pollen-coated bedroom.