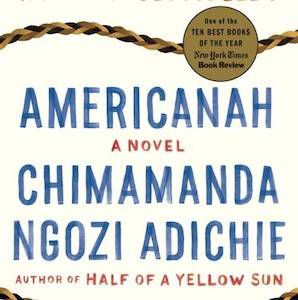 After hearing much fanfare, I’ve started reading Americanah by Chimamanda Ngozi Adichie. If you don’t know much about it, it’s a book that takes a frank look at race and racism in America. Adichie was featured on Beyonce’s latest album, and the novel won the National Book Critics Circle award for fiction in 2013, among other critical acclaim.

And to my great relief, I’m really enjoying Americanah.

Because I’m afraid if I didn’t like it, people would assume I’m racist.

To be fair, there are many legitimate reasons to not love Americanah. It’s not very subtle (though Adichie actually addresses that in the book—racism often isn’t subtle. Why does its treatment in books have to be? Great point, and I agree, but that’s a discussion for another day.). I’m finding it a bit too long; I’m about 400 pages in and ready to be finished with it (hello, short attention span). While I’m really enjoying it, I’m sure that there are great reasons for others to not, as there are with any novel, regardless of its subject matter.

This may seem like a moot point because, really, it’s a great, well-argued novel that is making me think on every single page. I like it. But there are those out there who haven’t liked Americanah, or other novels like it. Would I, or another reader, automatically assume someone is a bit racist if, for example, they said that books about slavery weren’t their thing? Or someone didn’t love The Help or Toni Morrison? I’ll be honest, I didn’t really like The Bluest Eye, but that was high school and I’d like to go back and give Morrison another try. But what would people assume about me, if I did give Morrison, perhaps the preeminent black female author of our time, an honest shot and decided she wasn’t an author I liked? It’s almost enough to keep me from reading any more of her novels, for fear of what people might think (ALMOST. But not enough. I will read more of her books.).

I make it a point to seek out novels by authors of different races, cultures, and backgrounds. I hate that I have to make a concerted effort to do this, but as we’ve discussed extensively at Book Riot, most books published are by white male authors. And I enjoy reading different perspectives. But, going back to Americanah, an honest, searing, and often uncomfortable portrayal of racism in America, what if I didn’t like that perspective? What would it say about me? Or, going back to the point of this article, what would people think it said about me?

We all want to think we’re above what others think of us. And for the most part, I honestly don’t care what others think of me and what I read. I enjoy the occasional breezy chick lit novel as much as I like delving into fantasy, mysteries, and literary fiction. I read what I want. But when we’re talking about the dreaded “r” word, things become much murkier. I don’t care if people think I’m flighty or dark or strange or nerdy or silly based on what I read. But I do care if people think I’m racist.

People should have the right to like or not like a book for their own reasons. Not liking Americanah shouldn’t automatically mean something bad. But I feel like it does, and I’m not saying YOU ALL are guilty of making assumptions and I’M PURE AND THE BEST. To be honest, I feel like I do it as well, otherwise why would the question even occur to me in the first place, about a book I’m enjoying rather than disliking? And I don’t like having that suspicion about myself.

What do you think? It’s not an easy question to ask yourself, but it’s a discussion worth having.