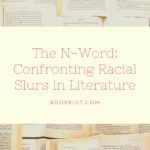 Encountering damaging representations of non-white characters and racial slurs is an occupational hazard of reading classic western literature. Books should be read within the context in which they were written and unfortunately, white supremacy was not only prevalent but celebrated at the time that many of the ‘great’ classic novels were written.

I know that people have taken many steps to counteract the prevalence of this singular narrative, such as not reading books by old white men, especially dead ones, and reading more diverse literature by authors from all over the world. I love these approaches. However, not only are a lot of the books by old white men actually good and worth reading, but they are also the ones that make up the majority of the literary canon that is taught in schools and universities. Yes, the literary canon needs to be diversified and there are people working towards that. But in the meantime:

How can we read these books responsibly, and how can we teach generations after us to read them responsibly too?

My sister is a high school English teacher in the UK, and even the fact that my little sister is mature enough to be managing a classroom of teenagers makes me erupt in all kinds of proud big sister joy. But in the past week, I had an especially proud sister moment when she told me about one of the lessons she conducted with her year 7 English class.

The class are studying the John Steinbeck classic Of Mice and Men. Like many great American classics, the Black characters in this book are often referred to as the n-word and other offensive names. If anyone is caught using the word in the school my sister works at, they risk expulsion. My sister didn’t relax those rules for her classroom.

At the beginning of her lesson, she handed each student in her class a sticker to place in the front of their book. This note is a reminder to every student that the use of the n-word and other such words is a hate crime and will result in expulsion if the word is used in her classroom. Even when they are reading the book out loud as a class, she is the only person allowed to use the word. Everyone else must say “the n-word”. They can say the word in their heads, but they are not to use it out loud. All racial slurs continue to be banned in her literature class, regardless of whether they’re in a book or not.

Did I mention that my sister is a Black teacher in a predominantly white school and that there are only two Black kids in her class of 30?

I know that not everyone is going to agree with this approach. There are people out there that might say her approach is excessive and we (Black people) are just being a little too sensitive. It’s political correctness going too far, am I right?

I grew up in a small city in the East of England and I was the only Black kid in my primary schools and one of two Black kids (at most) in my class all through high school. When we studied Of Mice of Men in high school, there was no care taken over the use of the n-word. Somehow there’s a pass when it comes to racial slurs in literature. The author wrote it and so we were all allowed to say it: end of story. And so I and the only other Black kid in my English class had to listen to our white teacher and our white classmates say that word countless times.

And of course, things didn’t end there because things are never that simple when you’re dealing with teenagers with undeveloped pre-frontal cortexes. Once the word was out there, it was open season. Kids started trying to use it colloquially, using that old excuse that they picked it up from rap culture. Consciously ignored the glaringly obvious difference between the melanated skin of those using the word in rap culture and the translucent skin they were sporting. When ignoring and glaring at all users of the word didn’t work, I finally had to say out loud, “I am not your n-word.”

Then they started to use it to refer to each other, which really was no better.

If the writer wrote it, that doesn’t mean you have to say it.

I’m not trying to censor books or writers. We don’t have to return to the Victorian times where an author would write D–n to signify a bad word. Rappers can put any words they like in their songs; doesn’t mean everyone has the right to say all of them. We’ve all been kids singing songs with swear words in front of our parents and known to say F instead of the full word. It’s not that hard.

And like I said, racial slurs are an occupational hazard of literature.

But by drawing attention to certain words and disallowing their usage, even when it comes to reading a text out loud, educators can demonstrate that yes, words do have power, they are hurtful and offensive and we don’t just get to arbitrarily decide when they are hurtful and offensive. They always are and we should always avoid them. Or at the very least, they should be avoided in a governmental institution where all peoples should feel safe to learn.

Because here’s the other thing: It isn’t just about the use of the n-word. Most of these books represent Black people in hurtful, stereotyped, racist ways and that is enough for a Black student to have to contend with. They don’t need to add a barrage of n-word utterances from their classmates to that experience.