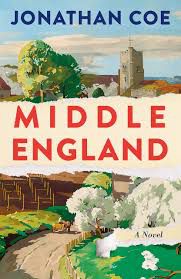 Jonathan Coe might be the ideal chronicler of the current Brexit-obsessed moment. His previous big, ambitious, state-of-Britain novels include the scathing Thatcher-era satire What a Carve Up! and the post-millennium Number 11. Middle England comes only three years after Number 11, yet in that short period so much has changed.

The Brexit commentary in Middle England can be too on-the-nose at times. At points the characters seem to be delivering soundbites rather than dialogue. But even in these places, what they’re saying has a poignant clarity, as when one elderly man expresses nostalgia for World War II:

“Making armaments, they were, munitions, aeroplane parts. Can you imagine! Can you imagine what it was like, hundreds of people, working together like that, for the war effort? What a spirit, eh? What a country we were back then! ‘Whatever happened to all that? It was bad enough when I was working here. Every man for himself, survival of the fittest, I’m all right, Jack. That’s what was starting to take over. But now it’s even worse, it’s just . . . fancy clothes and Prosecco bars and bloody . . . packets of salad. We’ve gone soft, that’s the problem. No wonder the rest of the world’s laughing at us.’”

When another character says, “Go on, tell me how fucking privileged I am. Tell me that people like me haven’t become victims in our own country,” the sense of grievance that led to Brexit is laid clear.

And though it might feel trite now, it’s still hugely important to talk about how Brexit revealed generational and geographical divides, and fault lines of class and race. Coe expresses this well when referring to:

“the unspeakable truth: that Sophie (and everyone like her) and Helena (and everyone like her) might be living cheek-by-jowl in the same country, but they also lived in different universes, and these universes were separated by a wall, infinitely high, impermeable, a wall built out of fear and suspicion and even –  perhaps – a little bit of those most English of all qualities, shame and embarrassment. Impossible to deal with any of this. The only practical thing was to ignore it (but for how long was that practical, in fact?) and to double down, for now, on the desperate, unconsoling fiction that all of this was just a minor difference of opinion, like not quite seeing eye-to-eye over a neighbour’s choice of colour scheme or the merits of a particular TV show.”

It’s significant that Middle England ends not in the UK, but in France. There, the central family have gathered to find some optimism about the future. It’s only a short distance across the English Channel, but the symbolic distance matters. This leads to some bittersweet reflections about Britishness, as:

“Benjamin had always assumed that he would grow old and die at home; that he was bound to end his life by returning to the country of his childhood. But he was starting to understand, at last, that this place had only ever existed in his imagination.”

“Books about Brexit, the European Union, and the UK”

“Books to Help You Deal with Brexit”