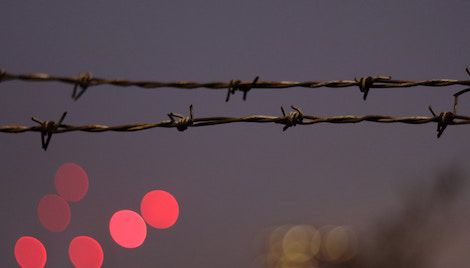 I read It Can’t Happen Here by Sinclair Lewis for the first time in the summer of 2016 and it messed me up pretty bad. I think about this book at least once a week as the news cycle overwhelms me.

First published in 1935, it is the satirical tale of the rise of an American authoritarian leader and the slow, almost unnoticeable way that could happen. Here are a few It Can’t Happen Here quotes that are way too real.

“He was an actor of genius. There was no more overwhelming actor on the stage, in the motion pictures, nor even in the pulpit. He would whirl arms, bang tables, glare from mad eyes, vomit Biblical wrath from a gaping mouth; but he would also coo like a nursing mother, beseech like an aching lover, and in between tricks would coldly and almost contemptuously jab his crowds with figures and facts—figures and facts that were inescapable even when, as often happened, they were entirely incorrect.” 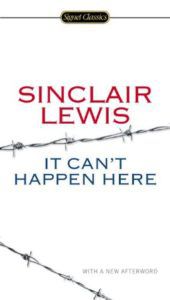 “I am convinced that everything that is worth while in the world has been accomplished by the free, inquiring, critical spirit, and that the preservation of this spirit is more important than any social system whatsoever. But the men of ritual and the men of barbarism are capable of shutting up the men of science and silencing them forever.”

“Every man is a king so long as he has someone to look down on.”

“He loved the people just as much as he feared and detested persons.”

“The Senator was vulgar, almost illiterate, a public liar easily detected, and in his ‘ideas’ almost idiotic, while his celebrated piety was that of a traveling salesman for church furniture, and his yet more celebrated humor the sly cynicism of a country store. Certainly, there was nothing exhilarating in the actual words of his speeches, nor anything convincing in his philosophy. His political platforms were only wings of a windmill.”

“Why, America’s the only free nation on earth. Besides! Country’s too big for a revolution. No, no! Couldn’t happen here!”

“A country that tolerates evil means—evil manners, standards of ethics—for a generation, will be so poisoned that it never will have any good end.”

“There is no Solution! There will never be a state of society anything like perfect!”

“The Executive has got to have a freer hand and be able to move quick in an emergency, and not be tied down by a lot of dumb shyster-lawyer congressmen taking months to shoot off their mouths in debates.”