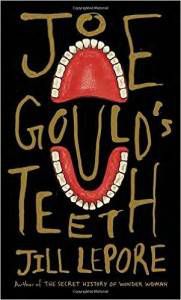 The story of Joe Gould is wildly interesting! He was an eccentric writer, and friends with famous artists, including Ezra Pound and William Carlos Williams. He believed himself to be the most brilliant historian of his time, and he claimed to write down everything that was ever said to him, and boasted of having written a nine million word manuscript. But reporter Joseph Mitchell later claimed in a New Yorker article that the manuscript was a figment of a madman’s imagination. Joe Gould’s Teeth is the fascinating story of historian Lepore’s own search for the missing – possibly imaginary – Gould manuscript.