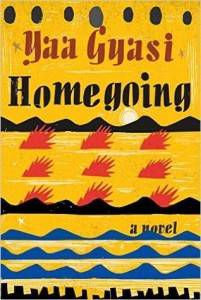 By now, you have probably seen this book mentioned a million places on the internet. And with good reason – this is simply one of the most phenomenal debuts released this decade.

Effia and Esi are half-sisters living in different villages in Ghana. But while Effia has been married off to an Englishman, unbeknownst to her, Esi has been sold into slavery and shipped to America. The fates of the two sisters continue down separate paths through generations, and Gyasi beautifully renders the places and events that occur. An extraordinary story of family and injustice spanning three hundred years, Homegoing is worth every bit of its praise. This book is an absolute marvel!