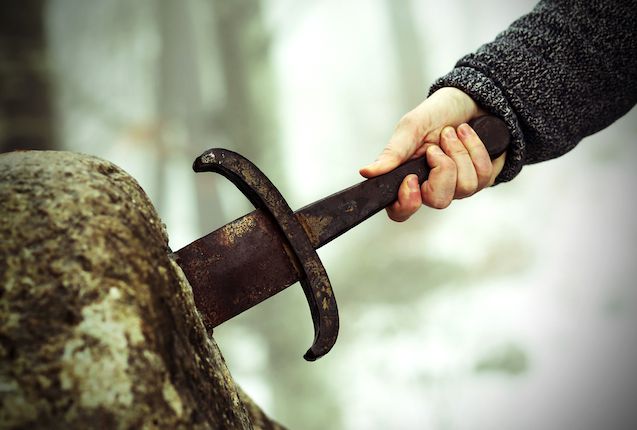 All someone had to say were: “queer,” “retelling,” and “King Arthur”—immediately I was like, DJ, TURN IT UP, THIS IS MY JAM. If you’re anything like me, you’re a sucker for queering the canon, especially when it comes to stories so integral to our culture as the King Arthur myth is. I remember reading Le Morte D’Arthur in the original Middle English during my college years and marveling at how complex and dramatic the stories of Arthur and his Knights were, and how many echos there are of them in stories throughout time and history. 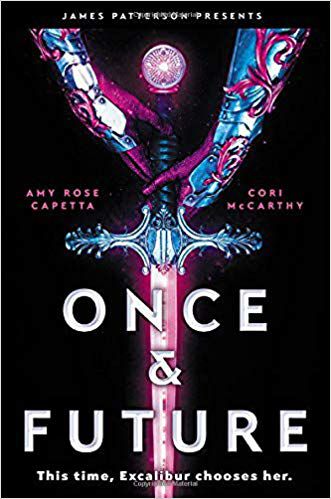 Cori McCarthy and Amy Rose Capetta are a real life couple who have reimagined the Arthur myth as a thrilling queer space adventure in Once & Future. In this book, Arthur is reborn as Ari, a brave young girl searching for her origins. She pulls the proverbial Sword, this time lodged in a tree stump on Old Earth, and together with her brother Kay, Merlin, Queen Gwen, and an inclusive team of Knights, they’re off to save the galaxy. So, knights and a wizard? Sign me up. Genderfluid, queer knights and a gay wizard? I’m leading the whole damn parade. I chatted with the authors to find out how it all came together.

All right, let’s start at the beginning. You’re both accomplished writers on your own, and this is the first time you’ve produced a book together. How did the conversation about working together come about, and what was the process like? Why was this project the right one for you to collaborate on?

Every few months, we sit down and write out a list of all our dream books. It’s a sprawling list with no rules, just stories that are forming or simmering in the back of our heads. Cori used to end every list with “and I’d like to write Girl King Arthur.” It was an intimidating idea to step into the Arthurian canon and add your own take, and while Cori wanted to do it, it wasn’t until they asked Amy Rose to write it with them that it started to take shape.

The process had two stages. In the rough draft stage, Cori wrote one POV character (can you guess which one?) and Amy Rose wrote the other. After that first draft, however, we edited large sections on our own, keeping an eye on continuity and character. We never used track changes and let one another make cuts and additions. It took a lot of trust, but we were prepared—we’ve been editing each other’s books since debuting in 2013.

There are elements of both the original Arthur myth in here, as well as some references to the Disney animated movie. What was your research process like? What sources did you use, and what was the decision making process in regards to what to keep and what to reinvent for your story?

One of the important bits we were drawn to is the mystery of the ending. Arthur’s body disappears after his death. Some stories say it’s in Avalon, but there’s always a sense that Arthur is missing. That in times of need, he might even come back. That’s how, canonically, we end up with the spirit of King Arthur still in play in the future. That’s how we get to Ari, the 42nd reincarnation of the legend—and the first girl in the line.

There are other aspects of Arthur’s story that we didn’t shy away from even though they’re hypocritical or outright awful. We talked a lot about how to deal with those parts of the mythos, instead of sanitizing it to a Disney sparkle.

And yet we do love some elements of that Disney movie, who wouldn’t? Even in a whimsical rendition for little kids, Merlin is a removed misanthrope in rainbow Bermuda shorts, and Arthur is painfully lonely even when he’s given the mantle of the hero. Actually, his loneliness increases when he pulls Excalibur. At the heart of this retelling, we found an emotional truth worth preserving about the hero’s journey and fantasy tropes.

That being said, the version we drew on most for inspiration was definitely T.H. White’s The Once & Future King. It grapples with some of the gravest questions of White’s time. He wrote it in the shadow of the world wars. It’s a piece of resistance literature that sings with hope and humor, and that balance was absolutely at the forefront of our thoughts in our own retelling.

What is it about the Arthur myth that you think still keeps audiences enchanted today? Why has it become such an integral part of Western folklore?

Camelot is a story of hope in the darkest of times. The round table might be Western civilization’s first legend that enshrines equality (though very imperfectly). The love stories involved famously dealt with romance as a driving factor, giving agency to a woman’s choice in who she loves. There are ideals embedded in here that most of us care deeply about and carry with us as we move forward.

By making ours a reincarnation story, we could be literal about it—there’s something here that just won’t die. King Arthur is always with us, as we keep descending into new versions of the dark ages.

So: what now? Can we escape this cycle? How does the story need to change?

The Knights of the Round Table are essential to Arthur’s story, and therefore to Ari’s success. Her diverse group of friends supports her and helps her execute plans against the Mercer Company throughout. We see new incarnations of Lancelot, Lamorak, and Percival in this story. What was it about those knights in particular that were essential to this retelling? Will we see more knights in the sequel?

We picked Lamarack and Percival because they’re siblings. Our story takes on the idea of family, both born and chosen, at every turn. It’s also worth noting that Lam’s disability—the loss of a hand—comes from the original tale.

You can’t really do an Arthurian retelling without Lancelot and the love triangle, and this is no exception, but we haven’t gone the traditional route. If you read the sequel, though, the role of Lancelot gets a very serious shake-up. We wish we could say more without giving spoilers!

There will definitely be more knights in the sequel. The main cast is set, but expect lots of fun Arthurian legend cameos!

Merlin’s plight is to age backwards as he continues to try and break the cycle of this curse—every time a new incarnation of Arthur is born, he must find them, train them, and nudge them onto the nearest throne. But throughout the story, Merlin grapples with his past and the knowledge that he doesn’t have much longer to break the cycle. What excited you about writing Merlin, one of the most iconic characters of all time?

Merlin is the ultimate mage, and the idea of writing him was intimidating! But the difference between worrying about it and writing turned out to be blissfully huge. When Amy Rose sat down to draft, Merlin’s voice came out like it had always been waiting. We think part of her really is a grumpy queer mage. But it’s bigger than that, too. There is a strange powerlessness that comes with being a teenager, when you understand so much about the world but you feel trapped by your age, by the way other people see you and underestimate you. Writing aged-backwards Merlin was an amazing way to exorcise that feeling.

This story is—dare I say it—queer as hell. What was important to you when telling not one but two queer love stories?

For Merlin, this is finally a chance to be who he is, openly and without fear. Of course, letting go of centuries of baggage is hard. It was important to us that Merlin finally gets a shot at love. He’s hardly ever been given that in the many tellings and retellings.

With Gwen and Ari, we had a choice: since we were gender-swapping Arthur, could we also gender-swap Gweneviere? We decided, emphatically, NO. We had always wanted to see Gweneviere as powerful in her own right. Our Gwen rules her own planet, calls her own shots. She and Ari are two girls who’ve never made themselves smaller to fit into anyone’s expectations. It felt amazing to write this powerhouse queer couple.

The future we’re writing about has no heteronormative or cisnormative expectations. People are who they are. They love who they love. We gave our characters complete freedom, and it felt like giving ourselves a long overdue gift. Hopefully, it will feel that way to our readers, too.