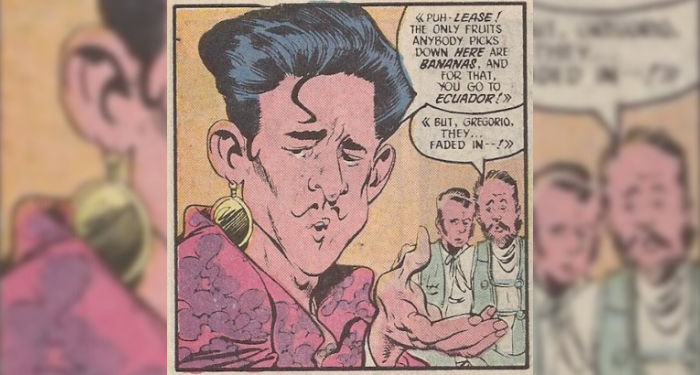 In recent years, mainstream comics publishers like DC and Marvel have made great strides in increasing the LGBTQ+ rep in their universes, though they still have a long way to go. But getting here was a slow and gradual process, with many notable landmarks — and some admitted missteps — along the way. In Queer Superhero History, we’ll look at queer characters in mainstream superhero comics, in (roughly) chronological order, to see how the landscape of LGBTQ+ rep in the genre has changed over time. First up: Extraño!

Gregorio de la Vega, better known as Extraño, debuted in 1988 and is the first openly gay superhero in a mainstream comic. Well, depending on how you look at it. He’s not the oldest character to be currently depicted as canonically queer: that distinction probably goes to Alan Scott, the original Green Lantern, who debuted in 1940…but didn’t come out until 2011. He’s not the first superhero to explicitly come out — that was Marvel’s Northstar in 1992, four years later.

But though Extraño and the characters around him never originally used the word “gay,” his publisher, DC Comics, did. And Extraño’s sexuality is repeatedly made perfectly clear in the text, as opposed to being heavily veiled to sneak past the Comics Code Authority. So let’s time travel back to 1988 and see what that looked like!

(Speaking of the 1980s: this article includes discussions of both fictional and real homophobia, racism, HIV/AIDS, and suicide.)

Listen, no one ever said the ’80s were a subtle decade.

Gregorio debuted in Millennium #2 (January 1988) and was created by Steve Englehart and Joe Staton. Millennium was a miniseries in which the Guardians of the Universe and their distaff counterparts, the Zamarons, selected a group of humans to become the vanguard of human evolution, granting each of them superpowers to help them achieve this destiny.

When Gregorio is first told he has been chosen as part of this group, he scoffs, “Puh-lease! The only fruits anybody picks down here are bananas.” And just in case that slightly labored joke wasn’t perfectly clear to all readers, his character design, particularly his pierced right ear — the so-called “gay ear” — should have completed the picture.

The unsubtle coding continues in Millennium #3, in which after being taunted by a straight man, Gregorio thinks, “They despise me…! Tonight, I despise myself…!” before attempting suicide by jumping into the ocean. He’s rescued by the Flash, who tells him in broken Spanish that it doesn’t matter what other people think, thus inspiring Gregorio to accept himself as one of the Chosen. This is pretty par for the course for queer rep in the ’80s, which largely consisted of straight heroes stopping gay bashing or being dismayed about AIDS. (Stick a pin in the latter. Oof.) Queer characters are largely positioned as tragic victims and eternal outsiders (or occasionally predatory). Gregorio, for all the awkward and clumsy stereotyping he embodies, is actually kind of refreshing, for though he’s introduced through this tragic lens, by the end of the series, he gets to have what might be the first instance of queer celebration in mainstream superhero comics.

Because in Millennium #8, the Chosen are granted their powers and codenames. Gregorio gets the costume reveal shown in the first image above, and joyfully agrees with his codename, which means “strange” in Spanish: “I am strange — wondrous strange!” And as for his powers: “Dreaming on the universal unity, I saw myself unraveling — and filling out the darkness! I’m a witch!” It’s not particularly coherent, but he’s so happy about it that it’s hard not to smile.

Once Millennium ended, the Chosen were spun off into their own series, The New Guardians, which lasted for a year. Gregorio continued to not use the word “gay,” though context continued to make his sexuality extremely clear.

So why the cautious language? Well, partially the Comics Code Authority, which forbade queer characters until 1989, but considering how unmistakably gay Gregorio is, it’s more likely to have been mostly due to editorial interference. (Fun fact: every issue of Millennium carried the CCA seal; no issue of New Guardians did.) In the hobbyist magazine Amazing Heroes #144, which came out in July 1988 — after Millennium ended but before New Guardians began — Englehart is quoted as saying that he’d actually quit New Guardians after writing #1 and plotting #2 (Cary Bates wrote the rest of the series) because editor Andy Helfer had objected to his planned AIDS plot line: “Andy said to me that he personally didn’t like homosexuals, and he didn’t want any homosexual in any comic he was editing.” When Englehart pointed out that Helfer had already edited Millennium, in which Gregorio was very much present, Helfer said that he thought Gregorio had been “cured.” YIKES.

In a statement to the same magazine, Helfer emphatically denied all of that, saying “I urged [Englehart] only to present the Gregorio character in what I believed to be a socially responsible manner, taking into account the incredibly diverse ages and backgrounds of the comic book readership.” Translation: think of the children! Whether Englehart was exaggerating is impossible to say for sure, 34 years later, but it’s certainly worth nothing that in a text interview at the end of Millennium #6, Englehart refers to Gregorio as gay, but Helfer describes him as “a man whose sexual mores and beliefs cause him to be persecuted not only by others, but by himself and his own feelings of inferiority and inadequacy.” Those sound like pretty uncomfortable circumlocutions to me.

Under Bates’s pen, Gregario became instantly less flamboyant and more subdued, calling everyone “amigo” instead of “dear” (so…a different kind of stereotype). His design gradually became more macho as well, culminating in the same rippling pectorals as every alpha male superhero on the stands. He did briefly get to indicate a love life on a single page of this 12 issue series, when he runs into an old flame and goes so far as to hold his hand. The letter columns showed a wide range of opinions from both straight and gay readers: some fans loved Gregorio, some hated him (either for being a stereotype or for being gay at all); some liked the changes, while others were disappointed by his butch-ification. It’s almost like a solitary gay character in the entire DCU couldn’t carry the weight of every single reader’s expectations and preferences!

And then there was the AIDS plot line.

In New Guardians #1, the team is attacked by the Hemo-Goblin, an HIV-positive vampire created by a group of South African white supremacists for the express purpose of destroying the New Guardians. Yes, you read that sentence correctly. I’m so sorry.

The Hemo-Goblin bites the Black woman on the team, Jet, and scratches Gregorio. Both of them, along with a white woman who is mystically connected to the Black woman, initially test negative for HIV, but later test positive. As many, many fan letters pointed out at the time, it was highly unlikely for Jet to have contracted HIV through the Hemo-Goblin’s saliva, and frankly impossible for Gregorio to get it from a scratch. The book’s editors (Helfer and Kevin Dooley) repeatedly hedged while doggedly pursuing their “relevant” AIDS plot line, denying the medical consensus and finally heavily implying that Gregorio had already been HIV positive, despite the comic making it explicit that he had not been…but after all, he was gay, wasn’t he?

It’s easy to see the good intentions underlying the remarkably diverse New Guardians concept as a whole, and Extraño’s creation in particular. But almost every character of color in the book is a walking stereotype, not just Gregorio. And though pop culture was very much in need of compassionate stories about living with HIV, the repeated misinformation and absolute refusal to admit any errors was actively harmful, and the embodiment of a deadly epidemic in the form of a cartoonish villain with an idiotic pun for a name was deeply offensive. It’s impossible to say whether the plot line would have been better if Englehart had been allowed to stick to his original plan instead of having Bates take over, but considering that the Hemo-Goblin was Englehart’s creation in the first place, I doubt it. (The Hemo-Goblin cast such a dark shadow over the book and Extraño in particular, in fact, that in the 2016 Love Is Love anthology, in a story written by no less than DC’s own co-publisher Dan DiDio, it was stated that Extraño had died of AIDS, which was absolutely not true.)

Given all of that, it’s not much of a surprise that Gregorio disappeared for 24 years, relegated to being an obscure, embarrassing piece of trivia.

And then in 2016, writer Steve Orlando pulled him out of obscurity for the Midnighter & Apollo miniseries. The Gregorio of the new millennium — pun intended — is much less flamboyant, but still explicitly queer, as he’s married to fellow hero Hugh Dawkins (Tasmanian Devil, DC’s second queer superhero, who debuted in 1977 and came out in 1992), and they have an adopted daughter. He’s also a confident and powerful sorcerer, very much in the Doctor Strange mode. On reintroducing the character, Orlando said: “With a book like Midnighter & Apollo, which from cover to cover is a love letter to queer characters and our struggle to live, be visible and love, it felt right to return to one of the first and reintroduce Gregorio to a new generation.”

In recent years, Gregorio has become an elder statesman to both queer heroes and magical ones, which feels absolutely fitting for the very first canonically gay superhero. He even got to team up with Midnighter to fight — and defeat — a neo-Nazi vampire in DC’s 2021 Pride anthology, which was an extremely satisfying final nail in the Hemo-Goblin coffin. So to speak.

Seeing the modern Gregorio so happy and confidently badass is an absolute joy — not to mention the wonderful fact that there are so many younger queer heroes for him to mentor these days, in sharp contrast to his lonely beginnings. But I have to admit I have a lot of love in my heart for the original Extraño too, who may have been subject to frequently clumsy execution, but was also warm, wise, and charming. The true victory is that we have both, and all the many characters who came after, whose profiles I am very excited to share with you.

I’ll end with one final note on Gregorio that made me smile when I saw it: as of this writing, the Wikipedia entry for Extraño states, under “Powers and Abilities”: “Extraño is amazing and fabulous.”

Yes, he is, anonymous Wikipedia editor. Yes, he is.