A particular pleasure to be had from seeing Shakespeare’s plays performed is hearing the audience laugh at jokes written some four hundred years ago. For William Shakespeare may have been dead for some four centuries but his innuendo filled dialogue still feels sharp. Sharpness stemming in part from frequent and none so subtle themes of gender and sexuality outside of gender-conforming cisgender heterosexuality.  Sometimes humorous, sometimes romantic, sometimes heavily symbolic, perhaps not always intentional, here are a selection of the queerest things to happen within Shakespeare’s writings.

As You Like It sees Celia and Rosalind flee together from the Duke’s court to the Forest of Arden with Rosalind disguised as a man named Ganymede [crossdressing occurs frequently in Shakespeare’s plays]. Whilst living in the Forest the shepherdess Phoebe falls in love with Ganymede, unaware that he is a woman. Orlando, who has also fled Court, has been in love with Rosalind since before they fled. He discusses this with Ganymede, somehow not realising that Ganymede is the object of his affections. Ganymede promises to cure Orlando of his love by acting out a mock courtship between them, two apparently male people.

The Merry Wives of Windsor culminates in a complex plot to save a woman from marriage. Two men each go to marry Anne but find their bride to really be a young man in disguise. Caius doesn’t discover the deception until after the marriage takes place, but interestingly nobody seems very upset that two men have just been married to each other in church [an event that is still legally prohibited in the Church of England some four hundred years later]. Rather they are amused at Caius’s great misfortune in having to be married to another man. 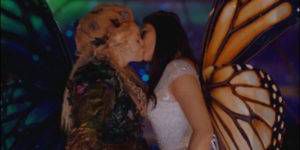 A Midsummer Night’s Dream hints of a romantic relationship between Helena and Hermia. Helena gives an impassioned speech in which she jealously compares her love for Hermia to Hermia’s love for Lysander. Helena speaks of their union “with two seeming bodies but one heart” in simile that would not be out of place in a wedding ceremony. The simile of joining their coat of arms is particularly spousal, as are her words “will you rent out ancient love asunder” which parallels Jesus’ words on marriage in Mark 10:9 “Therefore what God hath coupled together, let man not separate.” [Geneva 1599 translation]

Othello and Iago make “sacred vows” to each other have marital echoes despite their more sinister purpose. This is particularly seen in Iago’s dishonest declaration “I am yours forever”.

Romeo and Juliet’s story of forbidden love has familiar aspects for many queer people today living in homophobic, heteronormative community.  Also unintentional is the homoeroticism of Romeo’s own friendship with Mercutio, that would’ve seemed less queer in Elizabethan culture.

The Sonnets to a Fair Youth have resulted in much speculation over Shakespeare’s sexuality. Although some claim the 126 sonnets addressed to the fair youth are platonic in nature they have many romantic and sexual overtones. Shakespeare’s sexual desire for the man is discussed somewhat explicitly in sonnet 20, where he pontificates that if the man had only been a woman, specifically he laments through innuendo that if the youth had only not had a penis, then they could be together.

Troilus and Cressida: The characters in Troilus and Cressida include Achilles & Patroclus, figures from Greek mythology. Since antiquity they have widely been depicted as lovers, with varying degrees of ambiguity. No less so here. 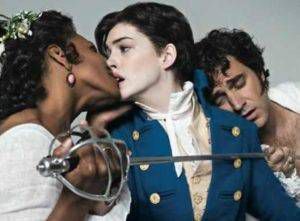 Twelfth Night: Viola, who has disguised herself as man, is employed by Duke Orsino to woe Countess Olivia for him. Countess Olivia, however, falls in love with Viola, who she assumes to be a man. Viola is only seen as a woman in one scene, which adds homoerotic aspects to her own relationship when Duke Orsino eventually falls in love with her. The play also contains puns about “hermaphroditism”, with Viola referring to herself as a “poor monster” a term used for intersex people which at this time was often confused with homosexuality.