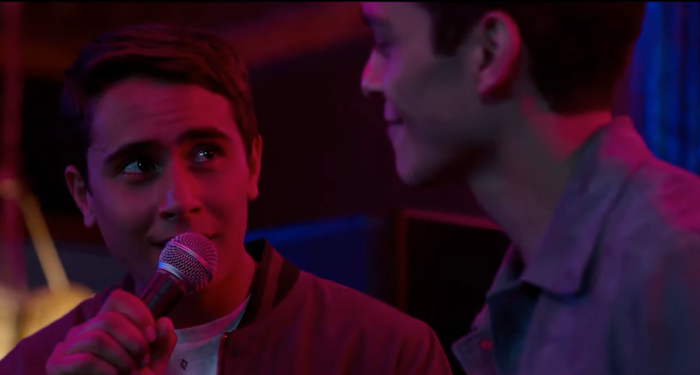 If you haven’t been watching Love, Victor, I highly recommend it. It’s a TV spin off inspired by Simon vs. the Homo Sapiens Agenda by Becky Albertalli. In it, Victor is a new student in Simon’s old high school, and he texts Simon for advice on coming out and navigating being a gay teenager. But Victor is from a Catholic Latinx family, and that adds complications to his experience that Simon didn’t go through.

(Spoilers for season 2) I’ve been enjoying the show in general, but there was one scene that stopped me dead in my tracks. Victor has become friends with Rahim, a gay Muslim classmate who is also struggling to come out to his religious parents. Rahim convinces Victor to forget about his relationship problems for a while by going to karaoke, where they sing “Holy” together.

This was the first time I’d heard this song, and both actors perform it beautifully. You can look up the performance on YouTube — and I certainly did. In fact, I found myself listening to their version on a loop, blinking back tears. (At a Justin Bieber song?? Get it together, Danika.) I’m a queer millennial, and it’s been a journey to see how queerness and same-sex love has been depicted in the media in the 15 years since I came out. I’m still shocked when a gay couple becomes canon in a kids’ show, or when a trans romcom by an author of color gets published by a mainstream publisher.

I’m so grateful that queer kids and teens have representation like this now, and I’ve thought that the whole time I watched through Love, Victor. That karaoke scene, though, felt like it reverberated through a century of queer media. Here are two gay kids, both who grew up in families that saw being gay as sinful, serenading each other: “The way you hold me feels so holy.” Seven years ago, I saw this same theme in the “Take Me To Church” music video (content warning for homophobic violence), but back then, it was a lament.

When I was 20, I read The Well of Loneliness by Radclyffe Hall, finally getting to this depressing classic of lesbian literature (or trans lit, depending on how you read it). It was, in fact, just as melancholic as I was expecting — with added racism. This 1920s novel, though, also felt chillingly relevant in sections. There’s one passage that has stuck with me in the decade since I read it.

“[W]hat I will never forgive is your daring to try to make me ashamed of my love. I’m not ashamed of it, there’s no shame in me.” And now she was stammering a little wildly, “Good and — and fine it was,” she stammered, “the best part of myself — I gave all and I asked nothing in return — I just went on hopelessly loving—” she broke off, she was shaking from head to foot…

I still get a little shiver reading that. Even in a society that condemns her as disgusting and sinful, Stephen recognizes not only that her love isn’t shameful, but that it’s the opposite. Her love is the best thing about her. Almost 100 years later, it still felt like a defiant and powerful statement, one that embedded itself in my own understanding of my queerness.

I’ve never been religious, but the closest I’ve ever come to a sense of spirituality has been through my queerness, through love. It makes me more empathetic, makes me feel a part of the “family of things.” In fact, Mary Oliver’s “Wild Geese” is its own reiteration of this same idea, extolling the virtues of letting the “soft animal of your body love what it loves.”

The few glimpses I’ve ever seen of the interconnectedness of the universe, those shining moments of clarity, they have always been through my queer love. My sexuality is a sacred part of my life, one that brings me joy, understanding, and revelations. Romantic or sexual love are not the only ways to finding meaning, but they are a path.

It’s a bittersweet feeling to see these ideas still be relevant more than 100 years after they’re written — and I’m sure they were said before The Well of Loneliness, too. It’s perverse to frame love as something sinful. Queer love is generative, nurturing, creative, and clarifying. It makes me a better person. It’s holy.